A poetry reading by a respected poet in Washington typically draws a couple of hundred listeners. Amanda Gorman, 22 and barely out of college, likely reached tens of millions of television viewers January 20 as she joined a star-studded presidential inauguration program.

Gorman, the youngest inaugural poet, read her poem “The Hill We Climb” in honor of the oldest president to take office, Joseph R. Biden.

Gorman was just the sixth inaugural poet. (The others were Richard Blanco, Elizabeth Alexander, Miller Williams, Maya Angelou and Robert Frost.) She read with dramatic gestures and a strong cadence, offering performance as well as poetry. 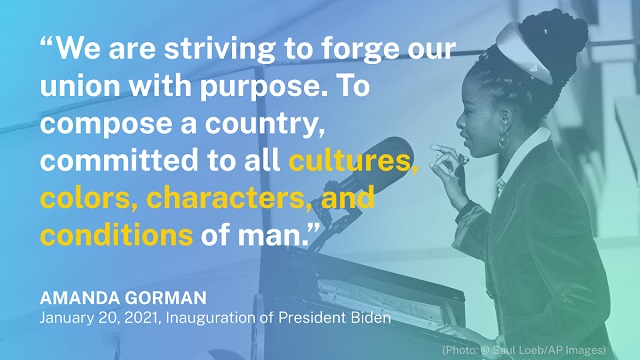 Recommended by first lady Jill Biden, Gorman may have seemed an unusual choice. Frost read at 86, as a recognized and beloved figure in American literature. But Joe Biden was elected to be a U.S. senator by age 29, and the choice signals a belief in younger generations and their ambitions for America.

Gorman’s poem provides a complement to Biden’s call for a renewal of democratic principles and greater unity among Americans.

And moments later, Gorman read her lines: “We are striving to forge our union with purpose. To compose a country, committed to all cultures, colors, characters, and conditions of man.”

In 1961, when Frost read at John F. Kennedy’s inauguration, he struggled. He had penned a new poem but had not memorized it. A snowstorm had blanketed Washington, and Frost read with the sun, reflected off snow, glaring into his eyes and with winds blasting at the paper he gripped. He stopped and changed course, reciting “The Gift Outright,” a poem written earlier that he could say by heart (and one critics say is a better poem).

Williams met Frost years before he himself would read at Bill Clinton’s inauguration. Williams said that Frost told him, “If you are ever asked to write a poem for an inauguration, tape it down.”

But Gorman, the first National Youth Poet Laureate for the Library of Congress, faced only typically cold January temperatures and read as if she had rehearsed carefully.

She took inspiration from Angelou, who also read at a Clinton inauguration. Wearing a caged-bird ring — a tribute to Angelou’s memoir I Know Why the Caged Bird Sings — Gorman alternated between rapid-fire staccato delivery and dramatic pauses. The reading style helped her connect with the audience and also connects her to Angelou, about whom poet E. Ethelbert Miller once said, “She could read the phone book and get people’s attention.”

Gorman’s poem provided a fitting bookend to Biden’s speech. The new president said he looks to a future when people will say about the years of his administration that “… America secured liberty at home and stood once again as a beacon to the world.”

Gorman said, “To put our future first, we must first put our differences aside.”