The term glass ceiling is used to refer to an invisible but real barrier to advancement for women or minorities. Berger happens to be a master glassmaker.

He made Harris’ portrait with safety glass, which has a layer of plastic in the middle so that when it is broken it makes spiderwebs of cracks instead of shattering completely. He has honed his technique by tapping on the glass with varying levels of persistence and force to make those cracks form remarkably lifelike portraits.

Berger’s portrait of Harris was displayed in the U.S. capital in early February, between the Washington Monument and the Lincoln Memorial, at a prominent place in the iconic park called the National Mall. 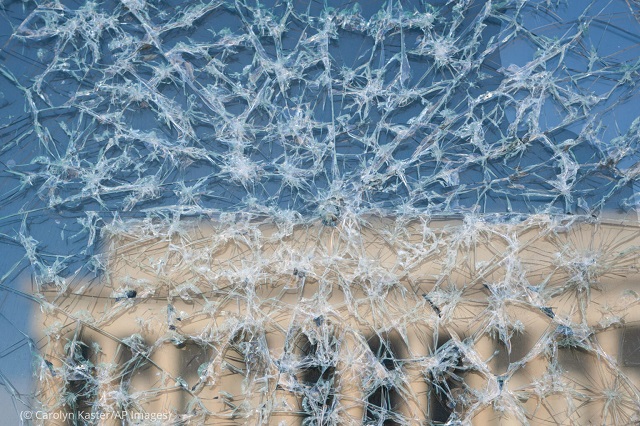 The project was presented by the National Women’s History Museum, an online collection that eventually will grow to occupy a physical museum in Washington, and by Chief, a network for women leaders. The art is owned by the creative agency BBH New York. Although the piece has been removed from the Mall, the museum plans to install it in the future. Plans are under consideration to send it on tour soon.

“Representation matters, especially at the ballot box, and the inauguration of Kamala Harris as the first woman, and first woman of color, to serve as vice president of the United States is a landmark moment in American history,” said Holly Hotchner, president and chief executive of the museum.

“Today’s progress is built on the legacy of the women who came before — the trailblazers, like Kamala, who raised their voices, marched for their rights and ran for elected office,” Hotchner said, “the women who cracked glass ceilings so that other women could shatter them.”

Today, a photo of the portrait keeps company online with a multimedia lineup, including a film about glass-ceiling breakers who were firsts in their positions.

Berger based his glass portrait on a photo by Celeste Sloman, a New York City photographer. He created areas of light and dark using a hammer in a technique he pioneered. The dark laminated safety glass is set off with the white cracks that he is adept enough to make look like drawings. The Harris likeness is about 1.8 meters tall and weighs about 160 kilograms.

The portrait has one particularly important fan: Second gentleman Doug Emhoff viewed it at the National Mall and pronounced it “incredible.”