Powell Remembered as a Friend by U.S. Diplomats

When Colin Powell died at age 84 on October 18, tributes poured in from around the globe.

James A. Baker III, who served as White House chief of staff and in Cabinet positions under Presidents Ronald Reagan and George H.W. Bush (including as secretary of state from 1989 to 1992), said Powell’s “resolute, intelligent and measured guidance” as chairman of the Joint Chiefs of Staff was critically important during the Bush presidency. “But General Powell was much more than a brilliant strategist,” Baker said. “He was a beautiful human being and a trusted adviser.”

Indeed, while the world knew Powell as a military leader and a statesman, to those with whom he worked at the U.S. Department of State, he was a mentor and a friend, as well as a boss. While serving his country as secretary of state from 2001 to 2005, Powell modernized the department and empowered diplomats.

The American Foreign Service Association (whose members are diplomats) hailed Powell’s dedication to his State Department “family.” Ambassador Eric Rubin, president of AFSA, said members are sharing an outpouring of affectionate reminiscences. The messages underscore Powell’s “care, confidence, support and concern” for his former employees, Rubin said. “The U.S. Foreign Service mourns him as one of our greatest secretaries and as a true friend of America’s career diplomats.”

AFSA, in a separate statement, said that Powell “believed in taking care of his ‘troops’ and acted on that belief. Few secretaries have devoted as much time to ensuring that the professional career Foreign Service was properly staffed, resourced, consulted and respected. For that, Secretary Powell will always be remembered with great affection and appreciation.” 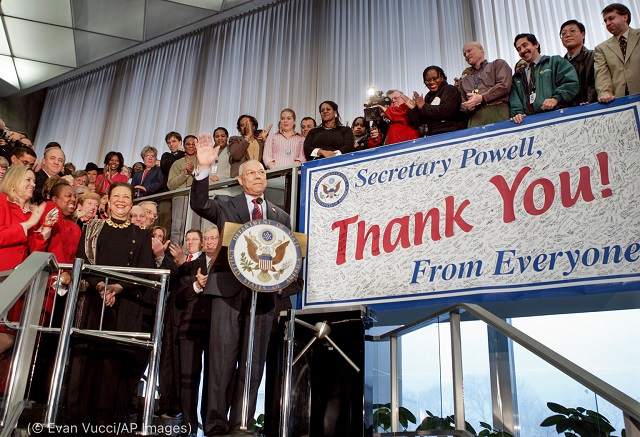 Nicholas Burns, a former under secretary of state for political affairs, said via Twitter: “General Colin Powell was one of our greatest public servants. A courageous and inspirational leader for both the State Department and the military. Admired by all who worked for him.”

John Negroponte — a former deputy secretary of state and a close friend of Powell’s — told CNN: “We’ve lost a great American. I’ve never known Colin to be other than beloved by everybody whom he touched.”

Prized by his peers

Other U.S. secretaries of state, both current and former, offered tributes as well.

Madeleine Albright, who preceded Powell as secretary of state (1997–2001), said she has lost a friend. “Although we grew up in different contexts, we bonded over our families’ immigrant stories, our deep love of America, and our belief in the importance of public service. He was a wise and principled man, a loyal friend and one of the kindest people I have ever met.”

Condoleezza Rice, his immediate successor as chief diplomat (2005–2009), said: “Colin Powell spent the entirety of his life in service to his country. He was a trusted colleague and a dear friend through some very challenging times.”

Secretary of State Antony Blinken, recalling a recent conversation with Powell, said: “Two things were clear — Secretary Powell’s depth of knowledge about world events was unmatched, and he loved the State Department and wanted it to thrive. … Today is a sad day for us here at State.” 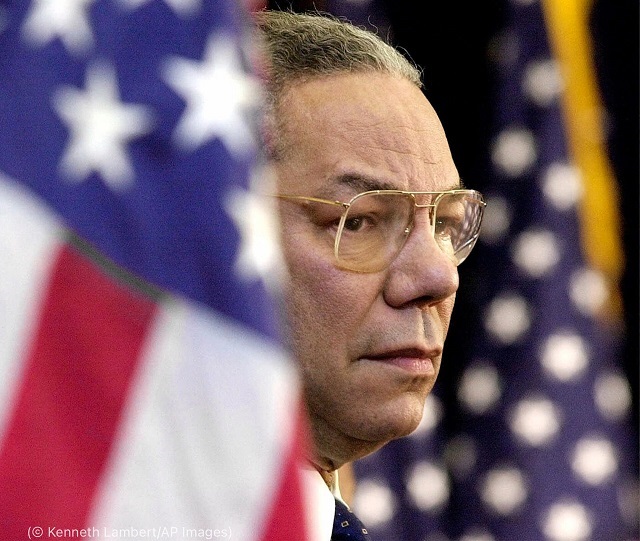 Secretary of State Colin Powell looks on as President George W. Bush speaks to State Department employees in 2001. The connections Powell made with staff made him more than a boss. (© Kenneth Lambert/AP Images)