U.S. President Donald J. Trump is scheduled to visit Japan in May 2019. Since former President Gerald Ford visited Japan in 1974, every U.S. president has been to Japan at least once. Here’s a look back at U.S. presidential visits to Japan over the past 30 years. Group picture of the heads of state participating in the annual economic summit of industrialized nations, taken outside Akasaka Palace in Tokyo on May 5, 1986. President George Bush kicks the ball during a demonstration of Kemari, an ancient imperial court ball game, during his visit to the Imperial Palace in Kyoto, Japan on January 7, 1992. Watching in the background are first lady Barbara Bush and former Prime Minister of Japan Toshiki Kaifu. President George Bush and First Lady Barbara Bush stand at attention together with Japan’s Emperor Akihito and Empress Michiko during a welcome ceremony at Tokyo’s Guest House on January 8, 1992. President Clinton waves to a group of flag waving Japanese school children while participating in an honor ceremony at Akasaka Palace in Tokyo on April 16, 1996. Surrounded by Secret Service agents, President Clinton exchanges a “hi” with Japanese women as he takes a morning jog at Tokyo’s Jingu-Gaien park on April 17, 1996. President Clinton smiles as he talks with Tetsuya Chikushi, anchorperson of Japanese news program “NEWS 23″ during his meeting with a group of Japanese citizens at a Tokyo TV studio on November 19, 1998. President Clinton expresses his sympathy to Chizuko Obuchi, widow of the late Prime Minister Keizo Obuchi, while holding her hand during a reception at the Akasaka Palace State Guesthouse in Tokyo on June 8, 2000, following the funeral service for the Japanese leader. Leaders of the Group of Eight wave during a group photo session in the garden of the Bankoku Shinryokan in Nago, Okinawa, on July 22, 2000. President George W. Bush hugs a Japanese girl who presented him a bouquet of sunflowers upon arrival with first lady Laura Bush at New Chitose Airport near Sapporo, Japan, on July 6, 2008. President Bush visited Japan to attend the G8 Summit. President Barack Obama visits the Great Buddha of Kamakura with Michiko Sato, temple director, and Takao Sato, the 15th chief monk of the temple, at Kotoku-in Temple in Kamakura, Japan on November 14, 2010. President Barack Obama eats green tea ice cream as he visits the Great Buddha of Kamakura with Michiko Sato, temple director, and Takao Sato, the 15th chief monk of the temple, at Kotokuin Temple in Kamakura, Japan on November 14, 2010.

President Barack Obama is welcomed by Japan's Emperor Akihito and Empress Michiko upon his arrival at the Imperial Palace for a welcoming ceremony in Tokyo on April 24, 2014.

President Barack Obama and a robot called ASIMO bow to each other during a youth science event at the National Museum of Emerging Science and Innovation, known as the Miraikan, in Tokyo on April 24, 2014.

President Barack Obama talks with Japanese Prime Minister Shinzo Abe on the Ujibashi bridge as they visit the Ise Jingu shrine in Mie prefecture on May 26, 2016 ahead of the first session of the G7 Ise-Shima summit meetings.

President Barack Obama lays wreaths at the cenotaph at Hiroshima Peace Memorial Park in Hiroshima on May 27, 2016. Obama was the first sitting U.S. president to visit the site of the world's first atomic bomb attack, bringing global attention both to survivors and to his vision of a world without nuclear weapons. 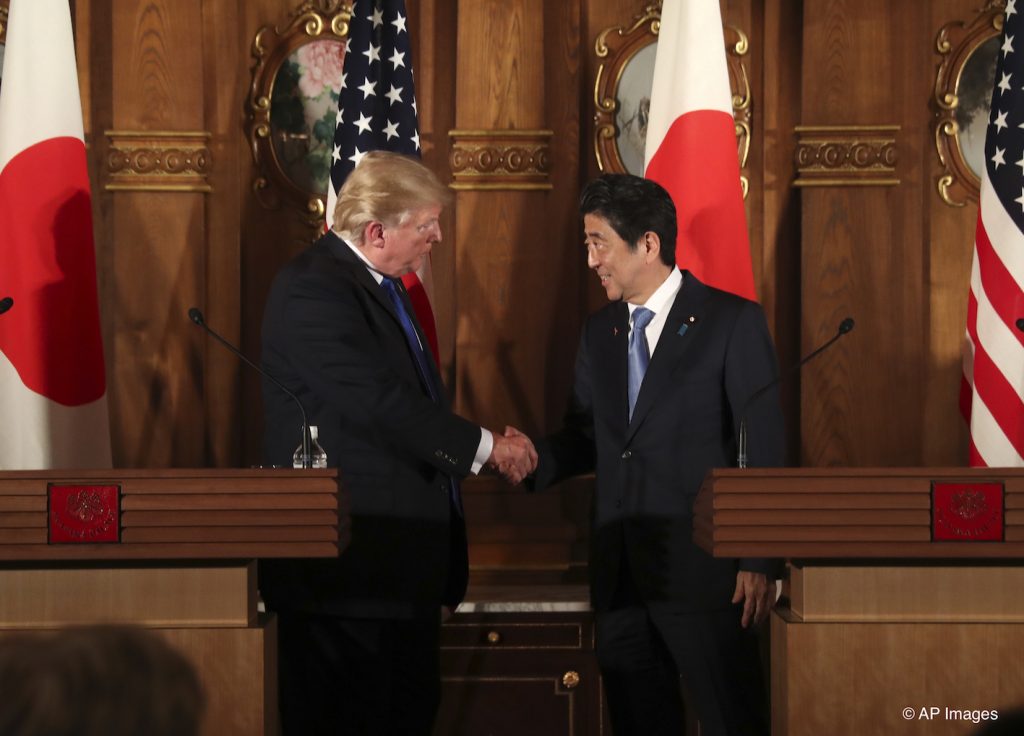 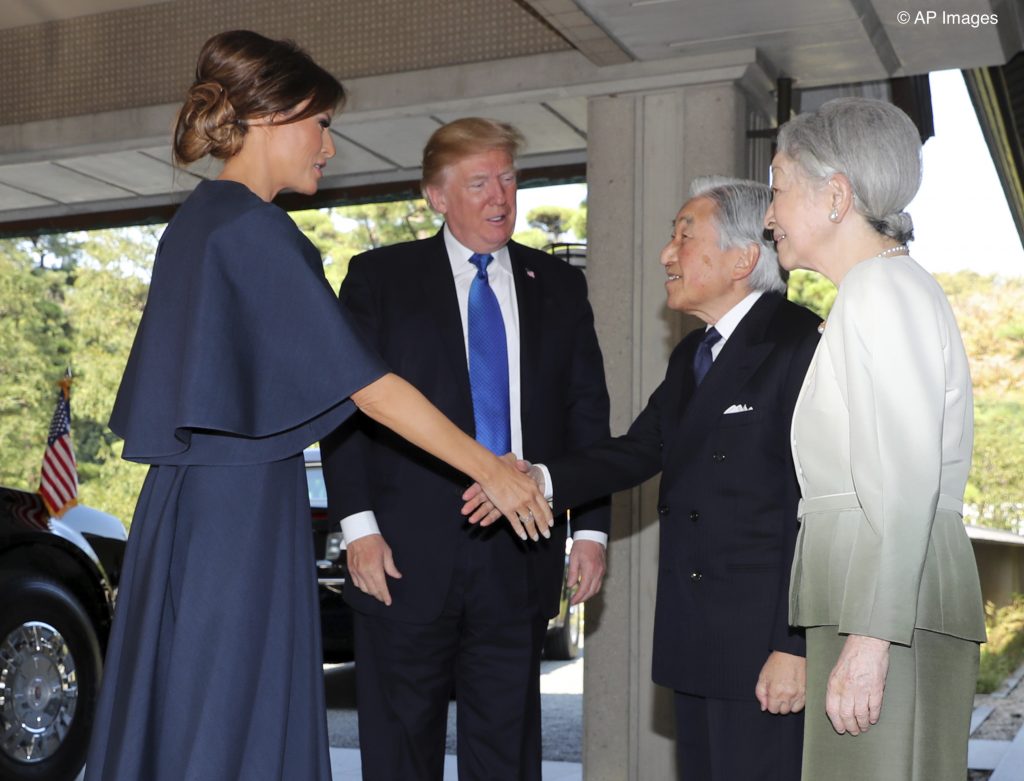 U.S. President Donald Trump and First Lady Melania Trump are welcomed by Emperor Akihito and Empress Michiko upon their arrival at the Imperial Palace in Tokyo on November. 6, 2017. 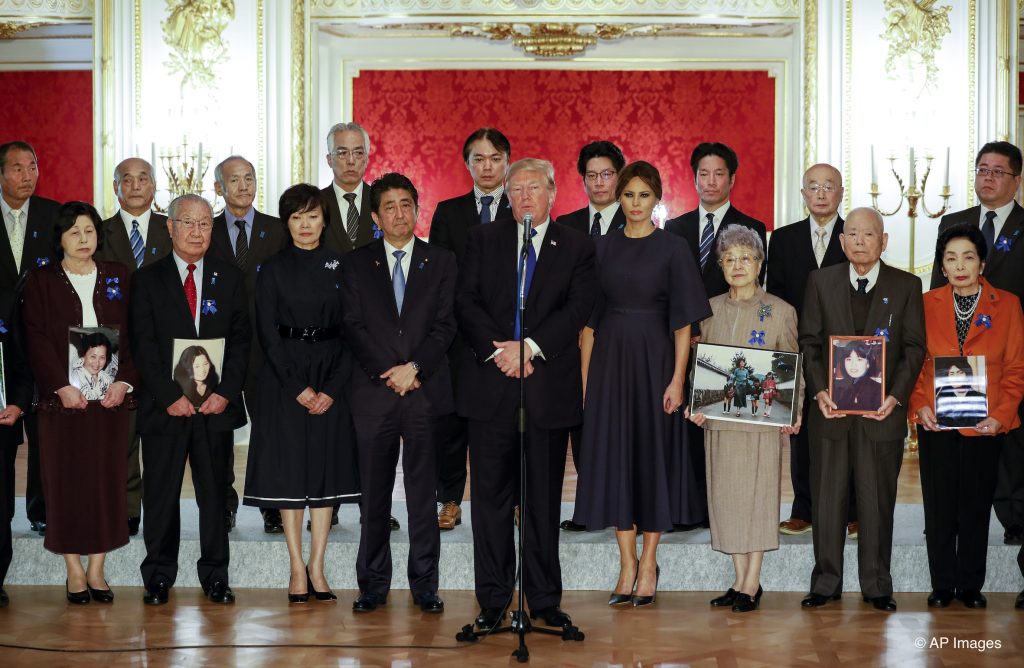 U.S. President Donald Trump speaks during a meeting in Tokyo on November 6, 2017, with families of Japanese abducted by North Korea.