Putin’s Revisionist History Is an Attempt to Justify Invasion

Enshrined in the Charter of the United Nations is the principle that countries will not use force against the “territorial integrity or political independence” of another state. To justify his brutal, unprovoked and premeditated invasion of Ukraine, Russian President Vladimir Putin offers this falsehood: Ukraine is not a country.

In a February 21 speech, Putin sought to justify recognizing Russia-controlled areas of Ukraine’s Donetsk and Luhansk regions as “independent” — a flagrant violation of international law — by falsely claiming that “modern Ukraine was entirely created by Russia.” He called the sovereign nation “historically Russian land.”

“He’s got it completely wrong, historically,” Timothy Snyder, a Yale University professor and author of books on Ukrainian and Eastern European history, said on MSNBC February 21.

The movement for an independent Ukraine predates the Soviet Union by 100 years, Snyder added, noting that aspects of Ukrainian history date to the Middle Ages.

In the 10th and 11th centuries, Ukraine was the center of Kyivan Rus, the first eastern Slavic state and the largest state in Europe. The Ukrainian state of Cossack Hetmanate formed in the mid-17th century and remained independent for well over 100 years, despite pressure from Moscow. 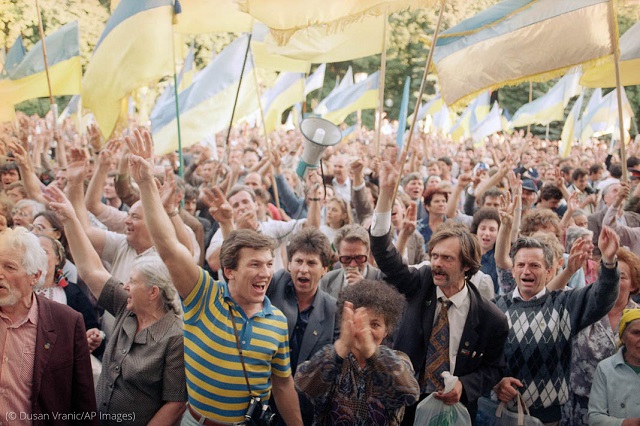 In his February 21 speech, Putin falsely claimed the Soviet Union established Ukraine in 1991, the year the Soviet Union collapsed. Ukraine declared independence in August 1991, and in a referendum in December of that year, Ukrainians supported the declaration, with 92% of voters choosing independence.

Against the backdrop of this revisionist history and pretexts, Putin launched a premeditated, unprovoked and unjustified full-scale invasion of Ukraine on February 24, violating its sovereignty and territorial integrity.

According to the U.S. Department of State, Russia’s officials regularly “distort historical narratives to try to cast Russia in a more favorable light,” citing attempts to revise “the history of Ukraine’s statehood.”

President Putin views Ukraine “not as a sovereign nation with the right to territorial integrity and independence, but rather as a creation of Russia, and therefore subordinate to Russia,” Secretary of State Antony Blinken said February 22. “It’s a completely false assertion that ignores history, international law, and the tens of millions of patriotic Ukrainians who are proud citizens of a free and independent Ukraine.”

Banner image: The Saint Sophia Cathedral in Kyiv, Ukraine, seen circa 1991, dates back to the 11th century, when Ukraine was the center of Kyivan Rus, then the largest state in Europe. (© DEA/C. Pozzoni/De Agostini/Getty Images)