Russian President Vladimir Putin’s war in Ukraine is contributing to rising food prices and threatening food supplies around the world. In Ukraine, Russia’s forces have destroyed farms, bombed warehouses, ruined fields, and seized tractors and other equipment for fortifications, according to news reports.

Land mines have forced Ukrainians to abandon their farms, and a Russian Navy blockade of Ukrainian Black Sea ports is limiting exports.

As a result, global food commodity prices are skyrocketing, according to the U.N. Food and Agriculture Organization (FAO). In March, food prices reached new highs “largely as a result of the war in Ukraine,” FAO reported April 8.

“War in the Black Sea region spread shocks through markets for staple grains and vegetable oils,” FAO added, noting that prices for corn, meat and other basic goods are also rising.

World food commodity prices reached their highest levels ever in March, as war in #Ukraine spreads shocks through markets.

Known as the breadbasket of Europe, Ukraine is 70% farmland and a major agricultural exporter. Ukraine produces about 10% of the world’s wheat and 15% of the global supply of corn, and it is the world’s leading exporter of sunflower seed oil. All of these goods have been severely disrupted by the Kremlin’s February 24 further invasion of Ukraine, experts say.

Bread prices are increasing across the Middle East and Africa, including in Egypt, Ethiopia and Lebanon, which all rely heavily on Ukraine for wheat. 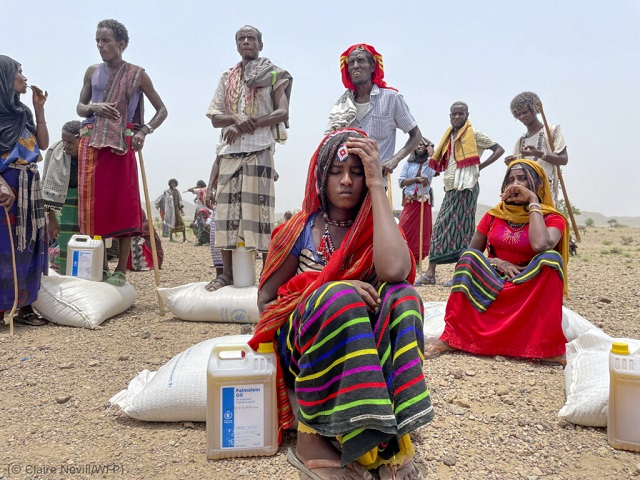 In 2021, people in Ethiopia’s Afar region receive food from a U.N. World Food Programme delivery. Ethiopia is among the African countries that rely heavily on wheat from Ukraine. (© Claire Nevill/WFP)

Shocks to the supply of sunflower seed oil have led to a 23% increase in vegetable oil prices and contributed to an upwards of 40% spike in palm oil, commonly used for cooking in Indonesia.

In East Africa, where drought and civil war in Ethiopia are causing widespread hunger, the war in Ukraine threatens to further increase the cost of wheat and other staples, an official with the humanitarian group Mercy Corps told the New York Times.

Oleksandr Kyrychyshyn, a farmer in southern Ukraine’s Kherson region, says that the Russian military is preventing spring planting, suggesting further disruptions of food supply. “I don’t know if I will sow,” Kyrychyshyn told the Times. “They told us that every car that drives out into the field will be shot.”