As the world mourns Great Britain’s Queen Elizabeth II, the longest-serving monarch in her nation’s history, U.S. officials note her constancy as a friend to the United States during her 70-year reign. She met with almost every U.S. president since Harry Truman and paid multiple visits to the United States with her husband, Prince Philip, Duke of Edinburgh.

President Biden and first lady Jill Biden said that Queen Elizabeth II was “more than a monarch. She defined an era.”

“Queen Elizabeth II was a stateswoman of unmatched dignity and constancy who deepened the bedrock Alliance between the United Kingdom and the United States,” the Bidens said.

Secretary of State Antony Blinken issued his deepest sympathies to the royal family and said that he, like other Americans, “will forever be inspired by the memory of her service, leadership, and friendship.”

Here are photos that trace the queen’s visits with 13 of the 14 U.S. presidents whose terms fell during some portion of her long reign. (Although the queen never met President Lyndon Johnson, her husband and sister did, and she carried on a correspondence with him.) 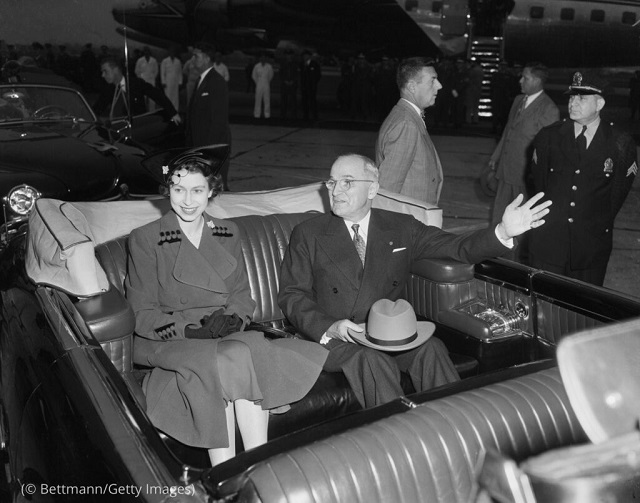 President Truman welcomed Britain’s then-Princess Elizabeth and her husband, the Duke of Edinburgh (who became a prince of the United Kingdom after his wife took the throne). Greeting the couple, Truman expressed the warm hope that “when you leave, you will like us even better than when you came.”

Here, the princess rides with Truman in a motorcade, following a reception ceremony at Washington National Airport on October 31, 1951.

Queen Elizabeth II developed a close friendship with President Eisenhower. They exchanged letters for years, and the queen even shared her recipe for grilled scones with the president.

In the photo at left, Eisenhower hosts Her Majesty for her first state visit to the U.S. as queen.

In the photo at right, the queen stands on the grounds of Balmoral Castle in Scotland with Eisenhower on August 29, 1959. From left to right are Princess Anne, President Eisenhower, Queen Elizabeth II and then-Prince Charles. 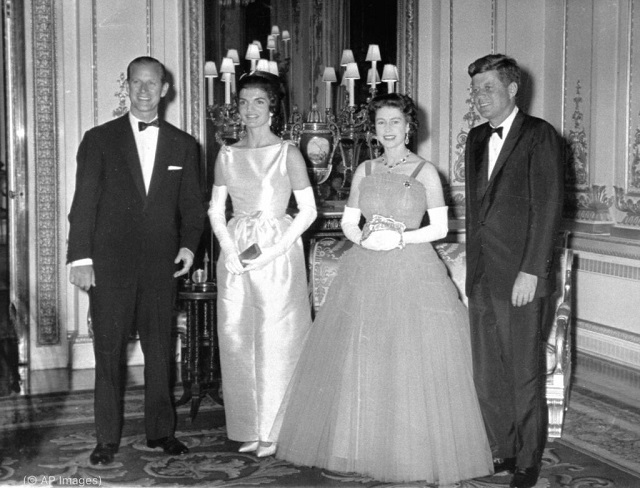 Here, the queen poses with the president (far right) before a formal dinner at Buckingham Palace on June 5, 1961. At left is Prince Philip, with Kennedy’s wife, Jacqueline, at second left. 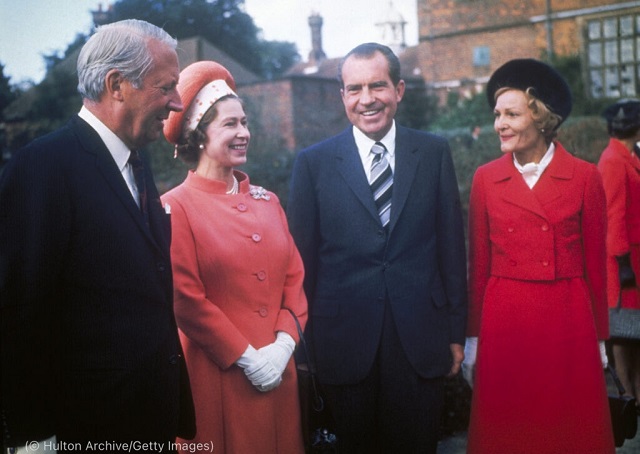 Queen Elizabeth II met President Nixon many times during his tenure as vice president and, later, president of the United States. 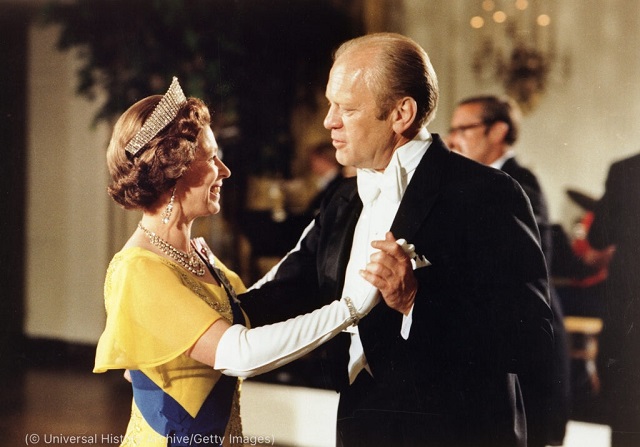 President Ford and first lady Betty Ford hosted a state dinner for Queen Elizabeth II and Prince Philip at the White House the evening of July 7, 1976.

The queen and the president enjoyed dancing at the event, which commemorated the U.S. Bicentennial Celebration of the Declaration of Independence. 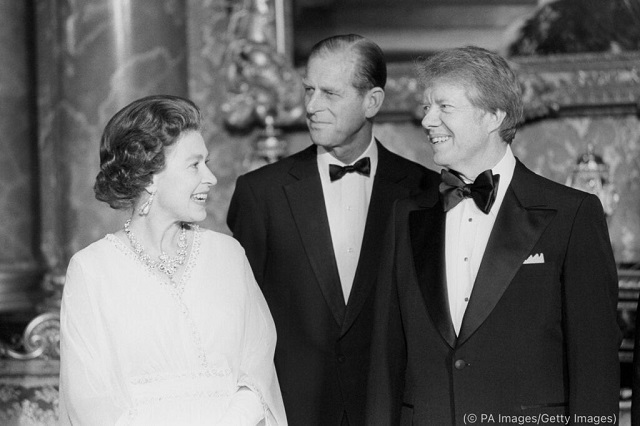 Queen Elizabeth II’s deadpan style as she delivered a joke about the California weather made President Reagan roar with laughter, as captured in the March 1983 photo on the left.

Earlier, as seen in the June 8, 1982, photo on the right, the queen and the president enjoyed riding horses on the grounds of Windsor Castle. Both leaders were dedicated equestrians. 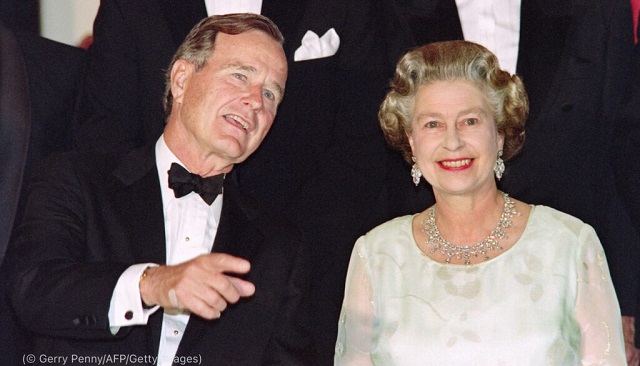 President Bush enjoys conversing with Queen Elizabeth II during the NATO summit in London on July 5, 1990. 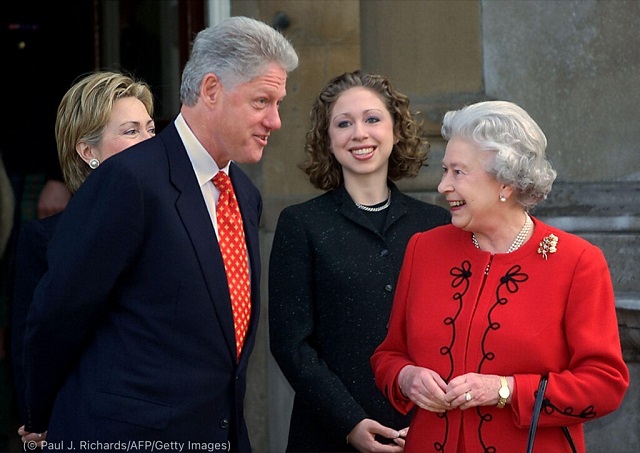 The Clinton family took tea with Her Majesty as they wrapped up their three-day trip to Ireland, Northern Ireland and the United Kingdom. 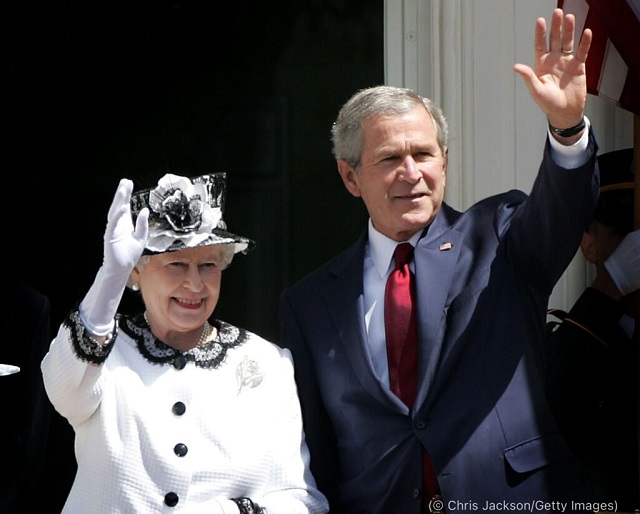 Queen Elizabeth II and her husband, Prince Philip, took a six-day state visit to the United States to commemorate the 400th anniversary of the settlement of Jamestown, in Virginia.

During the visit, the queen and President Bush waved from the balcony of the White House on May 7, 2007. 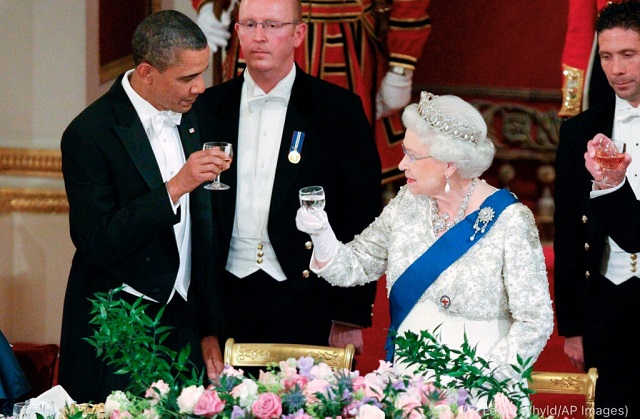 Here, the queen and the president exchange toasts at a state banquet at Buckingham Palace on May 24, 2011. 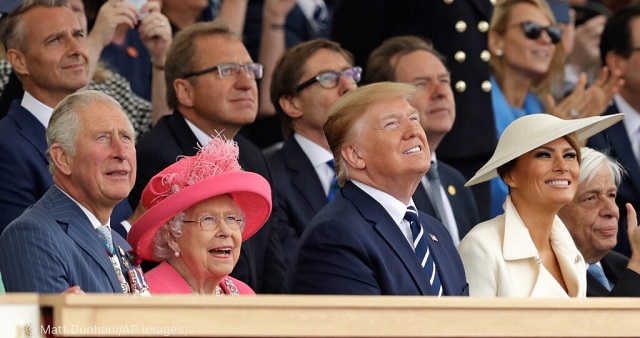 President Trump reportedly told the queen how much his mother, who was Scottish American, had revered her. 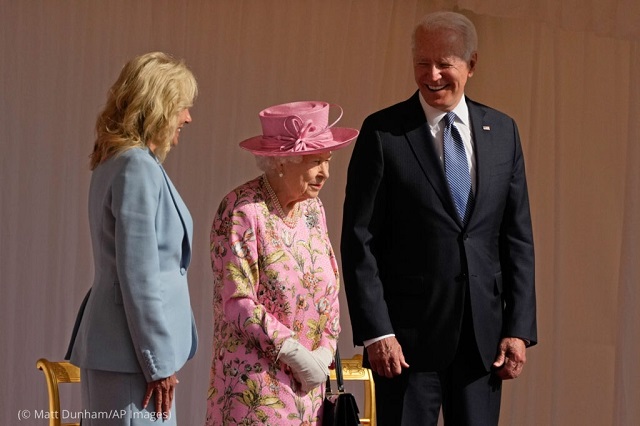 President Biden and first lady Jill Biden relished Queen Elizabeth II’s company as they watched a Guard of Honour march past before they sat down for a meeting at Windsor Castle on June 13, 2021.

The Bidens released a statement on learning of the queen’s death that says, “Today, the thoughts and prayers of people all across the United States are with the people of the United Kingdom and Commonwealth in their grief. We send our deepest condolences to the Royal Family, who are not only mourning their Queen, but their dear mother, grandmother, and great-grandmother. Her legacy will loom large in the pages of British history, and in the story of our world.”