At first glance, News Front looks like a legitimate news website. It’s not. It’s a Crimea-based propaganda outlet with links to the Federal Security Service, a Russian intelligence agency.

In its campaign to undermine Ukraine, democracy and free elections, the Kremlin creates websites like News Front that masquerade as independent news sites to spread disinformation.

News Front was founded in 2015 with the self-proclaimed goal of providing an “alternative source of information” for Western audiences. Publishing in 10 languages, it purports to provide “objective coverage.” Its content proves otherwise.

Some of News Front’s false claims include:

News Front is “one of the Kremlin’s most prolific and far-reaching propaganda weapons.”

In 2015, the European Union developed a site, EUvsDisinfo, to combat the Russian Federation’s ongoing disinformation campaigns, including websites like News Front. 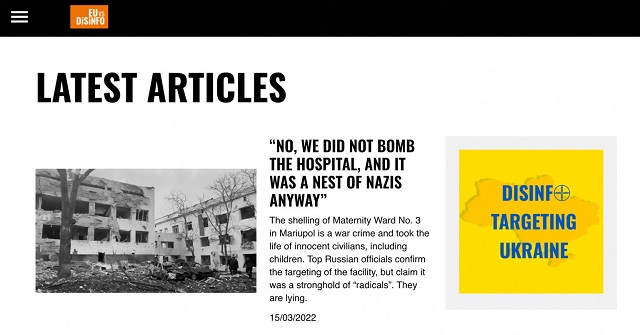 The Kremlin’s disinformation and censorship campaigns have increased dramatically since its further invasion of Ukraine in February 2022.

News Front is far from being Russia’s only fake news site. In March 2022, the Treasury Department sanctioned 11 Russian “intelligence-directed” disinformation outlets for spreading false narratives to justify Russia’s 2022 invasion of Ukraine. One of Russia’s primary disinformation narratives was that Ukraine was actually the aggressor, even though Russia attacked Ukraine and and seized territory in 2014, and then launched a massive further invasion of Ukraine in 2022.