The Kremlin is attempting to erase Ukraine’s culture, history, and identity in cities where its forces have advanced through bombing and targeted attacks.

Russian President Vladimir Putin and senior Russian officials continue to spread disinformation, claiming that Ukraine is part of Russia, and they seek to remove all symbols of Ukrainian culture forcibly.

“Vladimir Putin is waging a war of aggression that has destroyed parts of Ukraine’s unique cultural heritage in an effort to rewrite history,” said Lisa Carty, the U.S. representative to the economic and social council of the United Nations, on July 15. 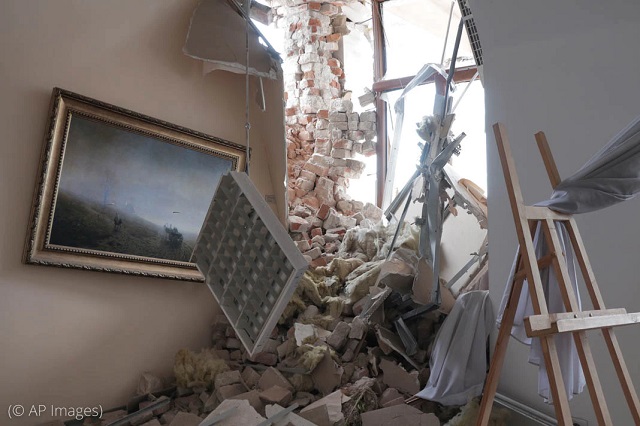 A hallway in a museum dedicated to Russian landscape artist Arkhip Kuindzhi was destroyed after shelling in an area controlled by Russian forces in Mariupol, Ukraine, April 28 (© AP Images)

The United Nations, the United States and other partners and international agencies are monitoring war-related damage to heritage sites in Ukraine. UNESCO officials visited Ukraine in July and confirmed that 164 cultural sites were damaged since the February invasion, including:

Bombing has damaged 2,129 education institutions, with 216 among them destroyed, according to UNESCO.

“Let us be clear: Destruction of cultural heritage during armed conflict endangers the identity, history, and dignity of the Ukrainian people,” Carty said. 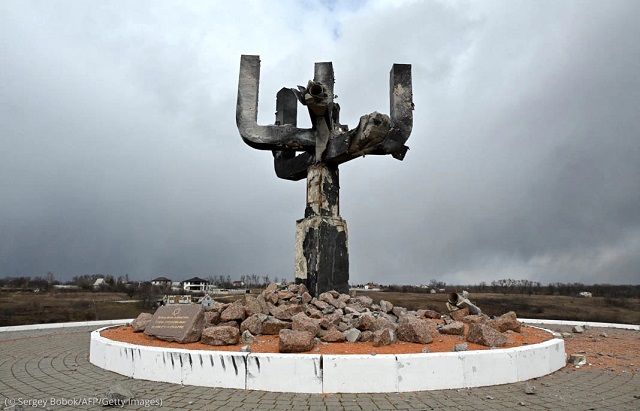 Russian shelling in March damaged a menorah-shaped monument that marks the location of a mass killing of Jewish people by Nazis during World War II. The monument is located at the entrance of the Drobitsky Yar Holocaust Memorial complex on the outskirts of Kharkiv, Ukraine. (© Sergey Bobok/AFP/Getty Images)

Kateryna Chueva, Ukraine’s deputy minister of culture and information policy, told the United Nations in July that 423 cultural sites were damaged. Destruction of cultural sites is a potential war crime and violates the 1954 Hague Convention requiring states to respect cultural property during conflict.

Since the February 24 invasion, Russian troops have looted museums in Mariupol, taking 2,000 works of art and stealing valuable gold objects from a museum in Melitopol. Russian FSB security agents raided the library of Mariupol’s Petro Mohyla Church in June, confiscated the books and burnt the entire collection in the courtyard.

In Borodyanka, the bust of revered Ukrainian poet and patriot Taras Shevchenko is a highly visible example of site damage — and Russian hostility. Shelling damaged the pillar holding up the statue, but bullets had hit the great poet’s forehead.

“The symbolism of the Russian attack on the monument was obvious,” Stephen M. Norris, a history professor at Miami University of Ohio, wrote. “Taras Shevchenko is not just the founder of the modern Ukrainian literary language, he is also the most important symbol of modern Ukrainian nationhood.”

Russia’s bombing campaign also damaged the area near Babyn Yar where 100,000 Jewish and other Ukrainians were executed by the Nazis during World War II.

Art and culture professionals from around the world are rushing to save Ukraine’s most treasured sites from Putin’s unprovoked war. Since 2002, the U.S. government has provided more than $1.7 million to support 18 cultural preservation projects in Ukraine. Support is provided by the U.S. Ambassadors Fund for Cultural Preservation, a program at the U.S. Department of State.

The World Monuments Fund, a nonprofit organization based in New York, launched a new initiative to preserve vulnerable sites. The organization is working with the United States and other partners to protect sites such as the Black House in Lviv, St. Sophia of Kyiv Cathedral and the Holy Trinity Church in Zhovkva. 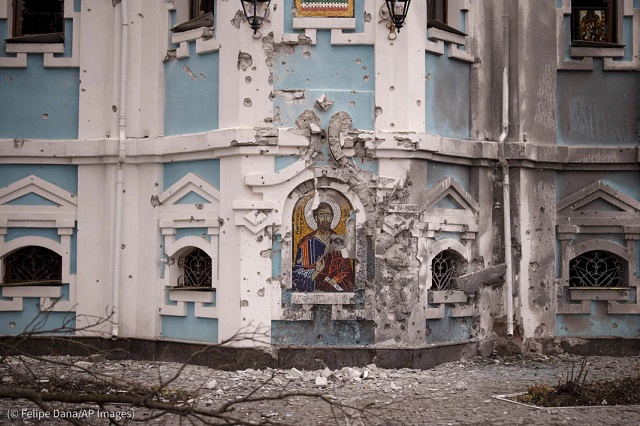 A Russian attack in March damaged this church in in Kharkiv, Ukraine. (Felipe Dana/AP Images)

“Churches are one of the most important historical values that Ukraine has,” said Maxim Kamynin, an architect in Kyiv. “Some buildings are over 1,000 years old; an incredible heritage that we must preserve and pass on to future generations.”

In Ukraine’s southern cities, Putin is imposing Russian cultural, economic, and citizenship standards upon Ukrainian citizens in violation of their sovereignty.

In Mariupol, Russian authorities removed school books that were published in the Ukrainian language and replaced them with ones in the Russian language, according to Olena Halushka, a board member at the Anti-Corruption Action Centre and co-founder of the International Centre for Ukrainian Victory. She tweeted, “Attempted brainwashing of kids in full swing.”

russians brought 5k school books of russian language, literature, & history to #Mariupol. Ukrainian books were removed. In the meantime, in the Kherson region, notebooks "the army of russia" w the text of their anthem are distributed. Attempted brainwashing of kids in full swing pic.twitter.com/4sLEeGhrx4

Russian flags also were installed along highways leading into Mariupol. A city sign was painted in the colors of the Russian flag.

In Kherson and Zaporizhzhia, Russian teachers are arriving to emphasize Russian language and history. Putin also announced a policy that provides fast-track Russian citizenship for Ukrainians in those cities.

“Part of Putin’s war is an attempt to erase Ukrainian identity,” U.S. Secretary of State Antony Blinken said in a May 23 tweet. “The Kremlin’s war on Ukraine cannot erase what makes the country and its people so unique.”