Removing artifacts, demolishing grave sites and shuttering churches are among the tactics Russia has been using since 2014 when it invaded Ukraine, occupied Crimea and instigated conflict in areas of the Donbas region.

The aim is to establish control over Ukraine and rewrite history.

Since 2014, Russia has seized 4,095 Ukrainian national and local monuments in Crimea in violation of international law, according to a 2021 report by the United Nations Educational, Scientific and Cultural Organization (UNESCO).

“UNESCO world heritage sites and other cultural sites in the temporarily occupied Crimea are subjected to barbaric treatment and robbery by the occupying authorities,” the agency stated. “They [Russian authorities] continue expropriation of the cultural property belonging to Ukraine.”

Since 2014, Russian actions in Crimea include:

“A large number of valuable objects of national and world significance have been suffering irreparable losses,” UNESCO said.

Bakhchysarai Palace of the Crimean Khans

Russia did not seek permission from Ukraine when it began what UNESCO described as “distortive restoration” of the Bakhchysarai Palace of the Crimean Khans. 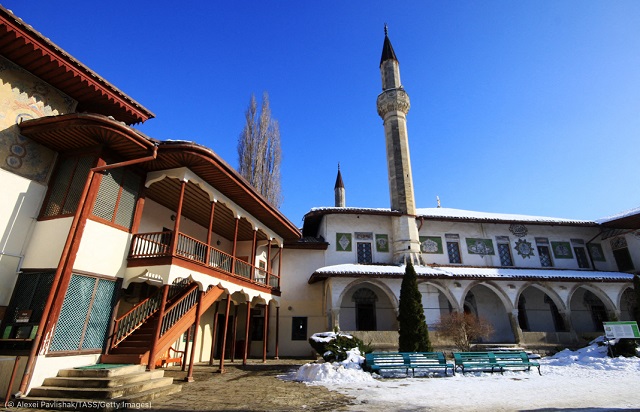 The Khan’s Palace is part of the Bakhchysarai Museum Reserve in Crimea. UNESCO said this historical monument is being “intentionally destroyed and damaged by large-scale illegal works.” (© Alexei Pavlishak/TASS/Getty Images)

The Khan’s Palace is part of the Bakhchysarai Museum Reserve showcasing Crimean Tatar culture. It consists of several palace buildings, mosques, a cemetery, a tower and archaeological sites.

UNESCO describes the 16th-century palace as “the only remaining architectural ensemble of the Crimean Tatars indigenous people of this kind.”

A company that has no experience with historical preservation completed the restoration in secret, UNESCO said. Oak beams were removed, and the palace was damaged in the process.

“It is a sign of criminal actions, which threaten to destroy the authentic preserved elements of the unique building,” the report stated.

Excavations using heavy equipment began in June 2021 at the Chersonesos Tavriya National Reserve in Sevastopol in the southwestern Crimean Peninsula. Russia’s defense ministry took control of the site, an ancient city first listed as a UNESCO World Heritage site in 2013. 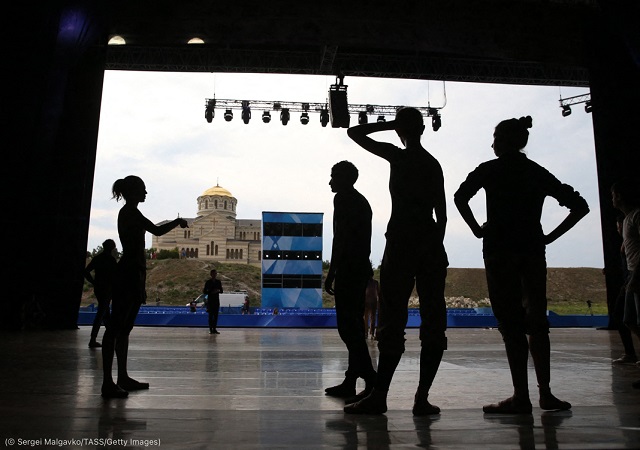 Russia seized historic sites in the Crimean Peninsula, including the Tauric Chersonese State Museum Preserve (above). The sites are often used for entertainment purposes, to which UNESCO objects. (© Sergei Malgavko/TASS/Getty Images)

The ministry sent research findings to Russian museums, and then began using the site for entertainment and propaganda purposes. UNESCO ended cooperation with Russian cultural officials in protest over the action.

UNESCO said unqualified organizations are involved with the excavations and restoration. Archaeological findings are exported to Russia illegally or appear on the black market.

“The Russian Federation does not fulfill its obligations to preserve cultural heritage sites in the temporarily occupied territory,” the report stated. 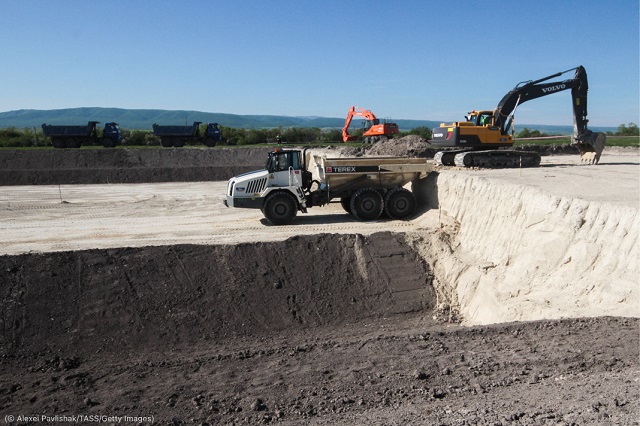 Russia destroyed Muslim burial grounds to build the Tavrida Highway, UNESCO said. The highway leads to the Kerch Bridge, which Russia built in 2016 to connect Crimea to Russia.

A Muslim cemetery was destroyed during the construction of a gas pipeline “leaving human bones scattered in the process,” UNESCO said.

Churches also are being closed or damaged. The Russian Justice Ministry denied registration to the two largest affiliates of the Orthodox Church of Ukraine in Crimea, one in Simferopol and another in Yevpatoria, and ordered the property be returned to the state. A Russian court in 2020 upheld eviction of the Simferopol parish and demolition of the Yevpatoria church.

International agencies are prevented from visiting Crimea to investigate damage or alteration to cultural institutions.

“The Russian Federation makes impossible the access of international monitoring missions to the peninsula,” UNESCO stated.

See some of Ukraine’s important cultural sites that the United States helps preserve.

Banner image: Renovation work at the Khan's Palace in February 2022 in the town of Bakhchysarai, Crimea. UNESCO said Russia is damaging, not restoring, the palace. (© Alexei Konovalov/TASS/Getty Images)