On a day that should have been devoted to cherishing their freedoms, Ukrainians had to celebrate their independence while fighting back against an unprovoked invasion.

In 1991, Ukraine voted for independence from the former Soviet Union. Three decades later, the nation has built democratic institutions that provide for free elections, a vibrant civil society and a peaceful transfer of power.

The Kremlin is trying to undermine Ukraine’s independence, sovereignty and democracy while also trying to rewrite history. Russian President Vladimir Putin and senior Russian officials continue to spread disinformation, claiming that Ukraine is part of Russia. Moscow seeks to remove all symbols of Ukrainian culture.

Russia’s aggression against Ukraine began in 2014 when it invaded Crimea and incited conflict in the Donbas. Then, following Russian troop buildups along Ukraine’s northern and eastern borders, the Kremlin launched this current invasion.

Here is a partial timeline of the conflict over the past six months:

Russia launches its full-scale invasion of Ukraine with strikes from land, air and sea. Troops enter the country from three points, including from Belarus to Ukraine’s north, heading toward Kyiv, Kharkiv and Kherson.

The U.S. government, along with allies and partners, announces “severe and immediate economic costs” against Russia that same day in response to Putin’s war of choice against Ukraine. Similar measures were taken against the Lukashenka regime in Belarus for its complicity in the war.

“Putin is the aggressor. Putin chose this war. And now he and his country will bear the consequences,” President Biden said that day. 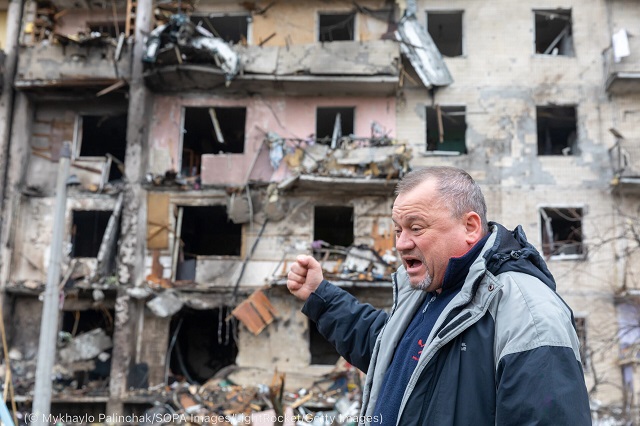 A man describes a Russian bombing of a residential building the day after the invasion began February 25. (© Mykhaylo Palinchak/SOPA Images/LightRocket/Getty Images)

March 1: Russia’s bombing campaign also damages the area near Babyn Yar, a historical site where Nazis killed 100,000 Jews and many others as part of the Holocaust during World War II.

March 2: At the United Nations, an overwhelming majority of nations condemn Russia’s aggression and call on Putin to end the war. The U.S. announces additional measures, noting that more than 30 countries have announced sanctions and export controls targeting Russia. 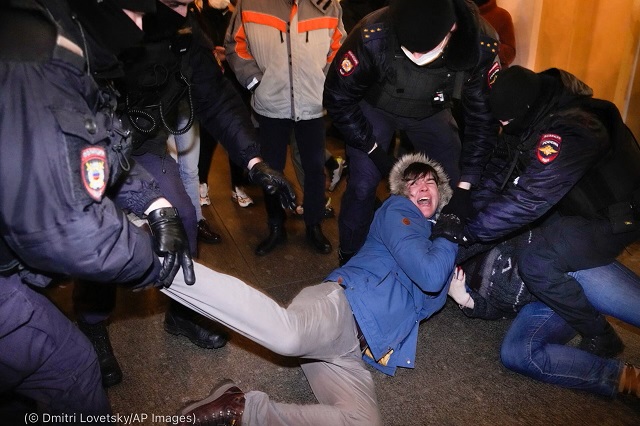 March 4: Russia ramps up its crackdown on dissent with a law that punishes people for criticizing the war in Ukraine. Domestic media are required to call the invasion of Ukraine a “special military operation.” 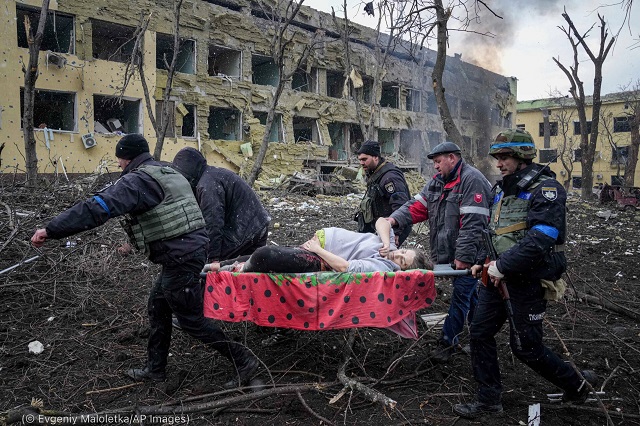 Ukrainian emergency workers carry an injured pregnant woman from a maternity hospital damaged by shelling March 9 in Mariupol, Ukraine. She and her baby both later died. (© Evgeniy Maloletka/AP Images)

March 14: A week after a Russian strike on a maternity hospital in Mariupol, a wounded pregnant woman and her unborn child (above) both die. The photo, showing a group of people carrying her from the hospital, is seen widely and highlights how the Russian military’s attacks are killing and wounding civilians. 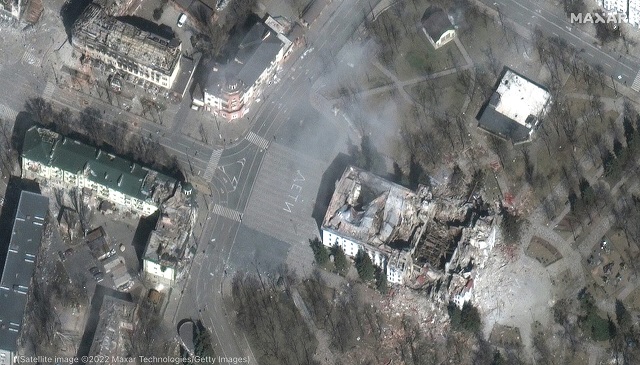 Maxar satellite imagery from March 29 shows an image of the extensive damage to a theater in Mariupol, with the word “children” written so it can be seen from the air, and surrounding civilian buildings in Mariupol, Ukraine. (Satellite image ©2022 Maxar Technologies/Getty Images)

March 16: Russia bombs the Donetsk Academic Regional Drama Theatre in Mariupol, killing an estimated 600 people (shown above). The word “children” was written in Russian outside the facility in letters large enough to be read from the air to indicate that children were sheltering inside.

March 24: President Biden and NATO allies pledge billions in aid for Ukraine during a NATO summit and Group of Seven meeting in Europe. The U.N. General Assembly adopts a resolution by a vote of 140–5, urging Russia to stop destroying Ukrainian cities. 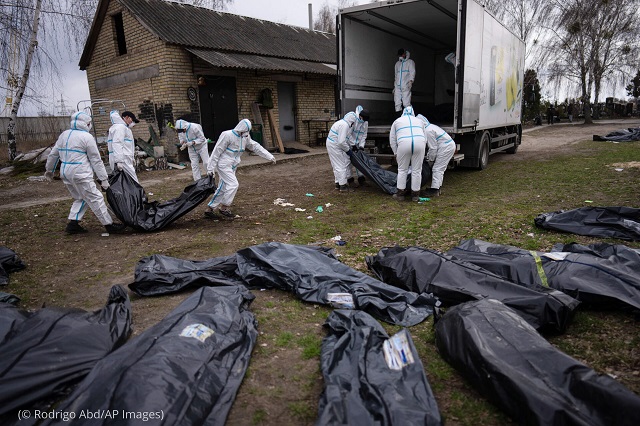 Volunteers load bodies of civilians killed in Bucha onto a truck to be taken to a morgue for investigation near Kyiv, Ukraine, April 12. (© Rodrigo Abd/AP Images)

April 2–3: Scenes of civilian deaths and mass executions in the town of Bucha horrify and outrage the world. The mayor estimates that Russian forces killed at least 300 residents. Democratic nations respond with more sanctions and many expel Russian diplomats. 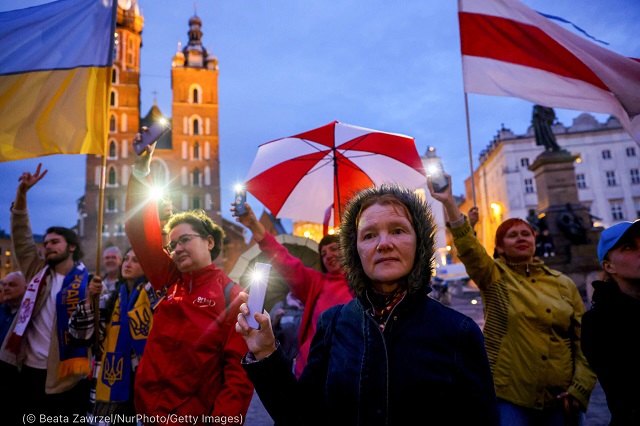 People attend a charity concert at the Main Square in Krakow, Poland, in May. The event was a gesture of gratitude of Ukrainian citizens living in Krakow to Poles for their help and support following Russia’s invasion. (© Beata Zawrzel/NurPhoto/Getty Images)

By May, the Russian military’s constant bombardment of Ukrainian homes and communities forced more than 5 million people to flee to neighboring countries. Millions are finding hope and help from nearby countries, such as Poland (above).

May 19: The impact of Putin’s war on Ukrainian agriculture and worldwide food security is spotlighted during the U.N. Security Council meeting on food insecurity and conflict.

“The Russian Government seems to believe that using food as a weapon will help accomplish what its invasion has not: to break the spirit of the Ukrainian people,” Secretary of State Antony Blinken said. 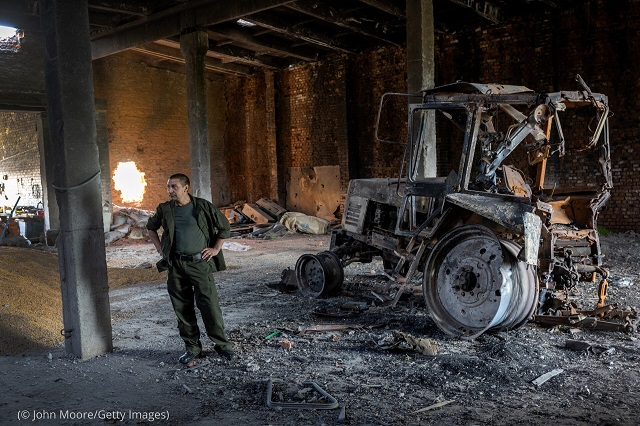 A farm worker in Cherkaska Lozova stands near a tractor that he said Russian shelling had destroyed in May. He said Russian forces also destroyed a grain warehouse and farm equipment while controlling territory outside of Kharkiv. (© John Moore/Getty Images)

June 23: The European Union announces Ukraine as a candidate for membership. The EU also says Russia is using food as a weapon by targeting facilities and blocking port access to the Black Sea. 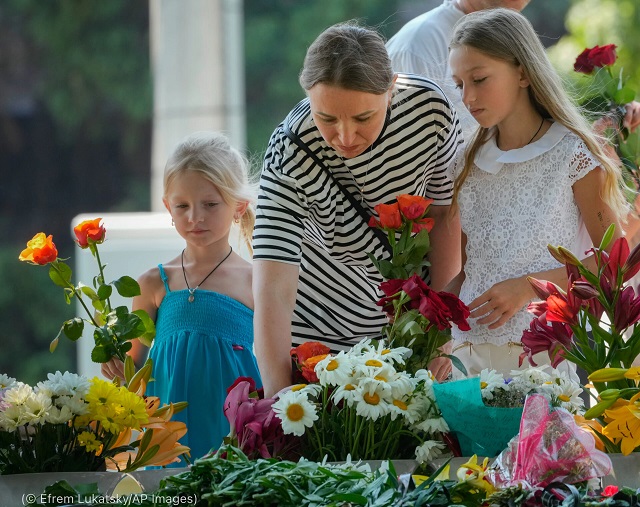 June 27: A Russian missile strikes a shopping mall in the central Ukrainian city of Kremenchuk, killing more than 20 people.

June 29: During a historic NATO meeting, Finland and Sweden are invited to join the alliance. Leaders from democracies in Asia joined the meeting for the first time in history. President Biden said, “We’re more united than ever.”

July 1: Russia retreats from Snake Island off the Black Sea to escape Ukrainian fire, calling it a “goodwill gesture.” 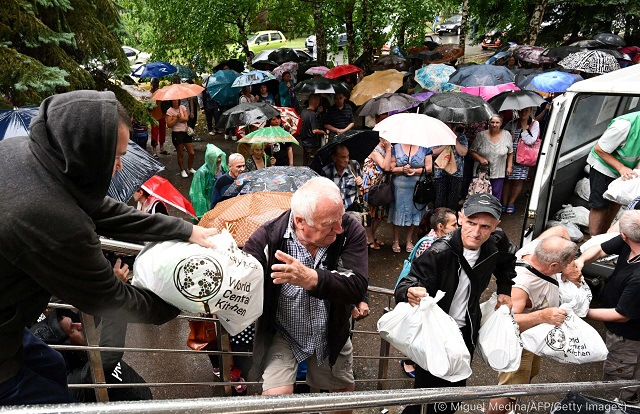 July 9: The World Food Programme reports that one out of three Ukrainians are unable to obtain enough food because of the war. Worldwide, millions of people risk food insecurity because Russian forces block tons of Ukrainian grain from the market.

July 13: Blinken calls on Russia to immediately halt its systematic “filtration” operations and forced deportations in Russian-controlled and held areas of Ukraine. 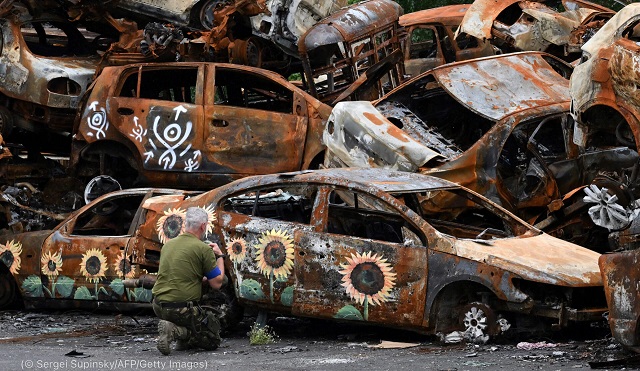 A Ukrainian service member crosses himself at the symbolic cemetery of cars shot by Russian troops, some painted by local artists, in Irpin, Ukraine, August 9. (© Sergei Supinsky/AFP/Getty Images)

By the first week of August, 6.4 million people have fled Ukraine and have been welcomed as refugees, mostly in surrounding European countries. At least 7 million more have fled their homes but remain in Ukraine, often in shelters or with friends and family.

August 8: “Nearly six months into the unprovoked and brutal assault on Ukraine, Russia continues its destruction of Ukrainian towns and villages,” Blinken said. “President Biden has been clear that we will continue to support the Ukrainian people as they defend their country from Russian aggression, for as long as it takes.”