Signing from the Highest Levels of Government

In the United States, federal sign language interpreters communicate government news and events to deaf and hard-of-hearing Americans every day.

“It’s a huge honor,” Stecker says through a sign language interpreter. “There are some deaf people who want to watch the interpreter,” she says. Others will simply read the captions, she said, and some prefer to read a transcript. Her work allows for all those options, she says, “without limitations.”

By covering White House press briefings, President Biden’s public events and White House announcements, including those from the first lady, Stecker and Snyder have a front-row seat to history.

When Biden delivered his first State of the Union address, they provided the ASL interpretation. They interpreted again when the president announced Ketanji Brown Jackson as his pick for the U.S. Supreme Court. They signed the recent White House press briefing following Queen Elizabeth II’s death.

“It’s an incredible range … but any time the president shows up somewhere and it’s made public, then here we are,” Snyder says.

Here’s how they work: Snyder (who can hear and has expertise in ASL) watches the event, listens to its audio stream, and interprets it into ASL in real time for Stecker (who is deaf). Both of them see each other on screen and watch the event simultaneously. After that, Stecker, the face of the operation, interprets it on camera during the live feed.

Their interpretations mirror the tone and mood of whoever is speaking. If, for example, one official is speaking heatedly and another calmly, that comes through in Stecker’s interpretation.

The topic at hand also affects their approach. They treat presidential updates on Russia’s war against Ukraine with gravitas. But they recently took a lighter approach to a virtual presidential roundtable on clean energy, in large part because the president was jocular at the meeting.

During April, which is National Deaf History Month in the United States, the State Department’s Sign@State symposium paid tribute to the long-standing contributions of its deaf and hard-of-hearing employees.

“Deaf and hard of hearing diplomats represent Americans of every race, religion, background — and from every part of our country,” U.S. Secretary of State Antony Blinken said at the symposium. “People who use American Sign Language make up an important linguistic minority that enriches our country, our government, and our Department.” 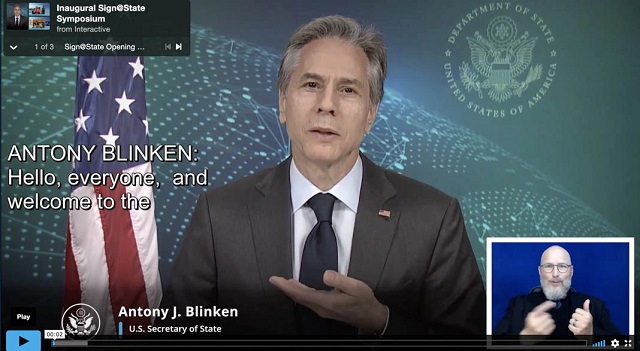