Kanpai! How the Story of American Whiskey Leads to Japan

For hundreds of years, American whiskey has been savored at weddings, sipped next to cozy fireplaces and in upscale bars, and poured to clinch business deals. It’s been slugged back in saloons and enjoyed during the excitement of thoroughbred horse races. In a cocktail, over ice, or neat, the amber spirit is refreshing in the summer heat and can warm the soul in the winter.

At a May 17 reception at his residence, U.S. Ambassador to Japan Bill Hagerty showcased both American and Japanese whiskeys to celebrate the strong economic ties between the United States and Japan.

Kentucky Governor Matt Bevin, speaking to more than 200 business and political leaders, helped kick off the night with a toast.

“This is to Japan and America, more specifically tonight to Kentucky, to the spirits we’ll be drinking tonight, to the spirits of our people, to camaraderie, to partnership, and to many more years of the same. Kanpai!” 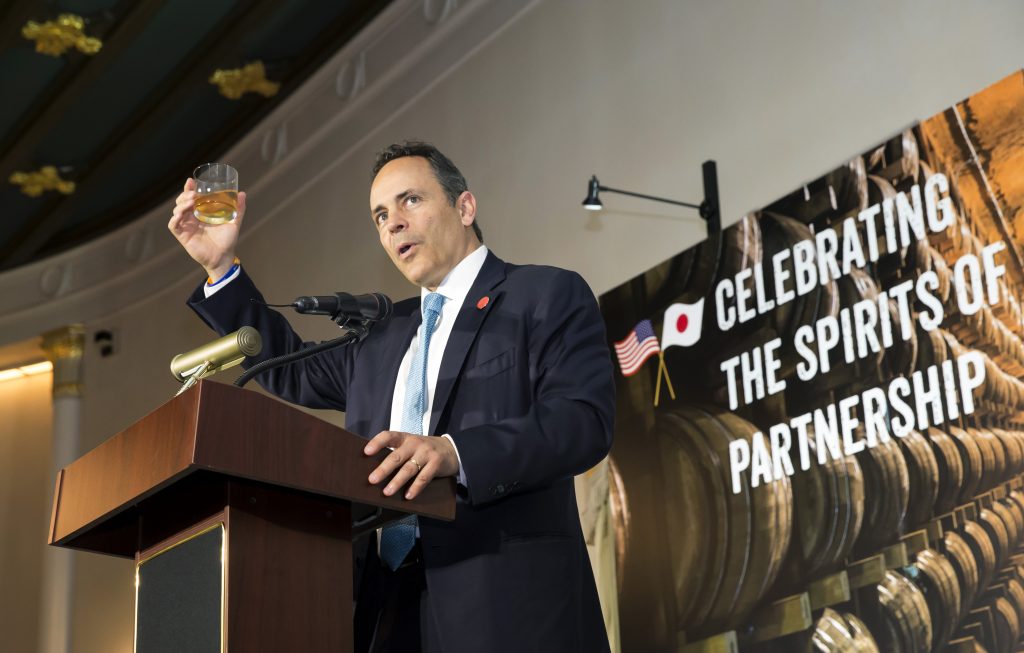 Kentucky Governor Matt Bevin raises a toast at the reception hosted by Ambassador Hagerty on May 17, 2018.

Historically, though, individual homestead farmers made whiskey. They could preserve their “amber waves of grain” by mixing their corn, barley, rye, or wheat with water, letting the resulting mash ferment, distilling it, and storing the resulting liquor in wooden barrels to age and mellow.

According to The Book of Bourbon by Gary Regan and Mardee Haidin Regan, early American colonists fermented beers, wines, fruit liquors, and rum. Dutch colonists in New York began to distill corn and rye liquor around 1640. Although distilling could be a dangerous process – heating alcohol over an open flame – it was great for farmers because they could chop down trees to clear fields and make firewood and barrels, ferment the excess grain they couldn’t sell, distill the alcohol, and use the remaining grain mash as animal feed. The resulting whiskey wouldn’t rot as raw grain would, and it could be transported easily to market. 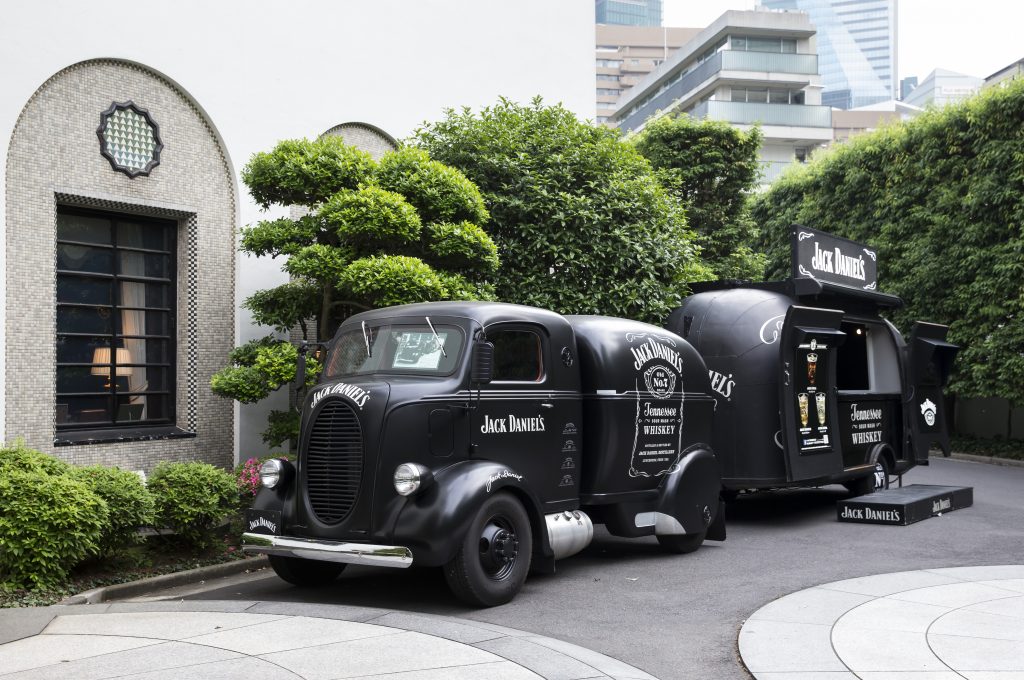 An old fashioned Jack Daniel's Tennessee Whiskey truck set up outside the Ambassador's Residence for the reception.

Whiskey played a role in the story of George Washington, a prominent Revolutionary War figure who later became the America’s first president.  As a Revolutionary War general, he supported controlled alcohol rations to his troops, saying, “The benefits arising from the moderate use of strong liquor have been experienced in all armies and are not to be disputed.” As a farmer in 1797, Washington built his own distillery, one of the largest in America at the time, to make whiskey from the corn and rye grown in the fields of his Mount Vernon plantation in Virginia. As president, Washington called up the militia in 1792 to put down a rebellion by farmers in Pennsylvania who were upset about taxes that had been imposed on whiskey to help pay debts from the Revolution.

Some farmers fled to Kentucky, where they began to make whiskey from corn. One center of production was Bourbon County, which is perhaps the reason why Kentucky whiskey came to be called bourbon. Barreled whiskey could be shipped down the Ohio River, then the Mississippi River to New Orleans, where it was sold in the bars on the city’s famous Bourbon Street. Maybe that’s where it got its name.

Whatever the source of the name, Kentucky bourbon is made with at least 51% corn and is aged in new, charred oak containers. In neighboring Tennessee, a further refinement is required for the beverage to be called Tennessee Whiskey: It must be filtered through a minimum of 10 feet of sugar maple charcoal before it is barreled for aging.

In the 21st century, American brands are not necessarily owned by American companies, however. For example, Japanese Beam Suntory, the third largest spirits company in the world, owns Jim Beam, Maker’s Mark, and Knob Creek bourbons.

Reflecting the shared production – and shared appreciation – of whiskey in Japan and the U.S., Beam Suntory, which has been distilling Japanese whisky since 1929, presented its Yamazaki, Hakushu, and Hibiki whiskies alongside its American brands at Ambassador Hagerty’s May 17 reception. (The beverage is spelled “whisky” in Scotland, Canada, and Japan and “whiskey” in the U.S. and Ireland.) Kentucky-based Brown-Forman offered its Jack Daniel’s and Woodford Reserve products. Smaller companies, such as American Four Roses and Japanese Nikka, were also represented. 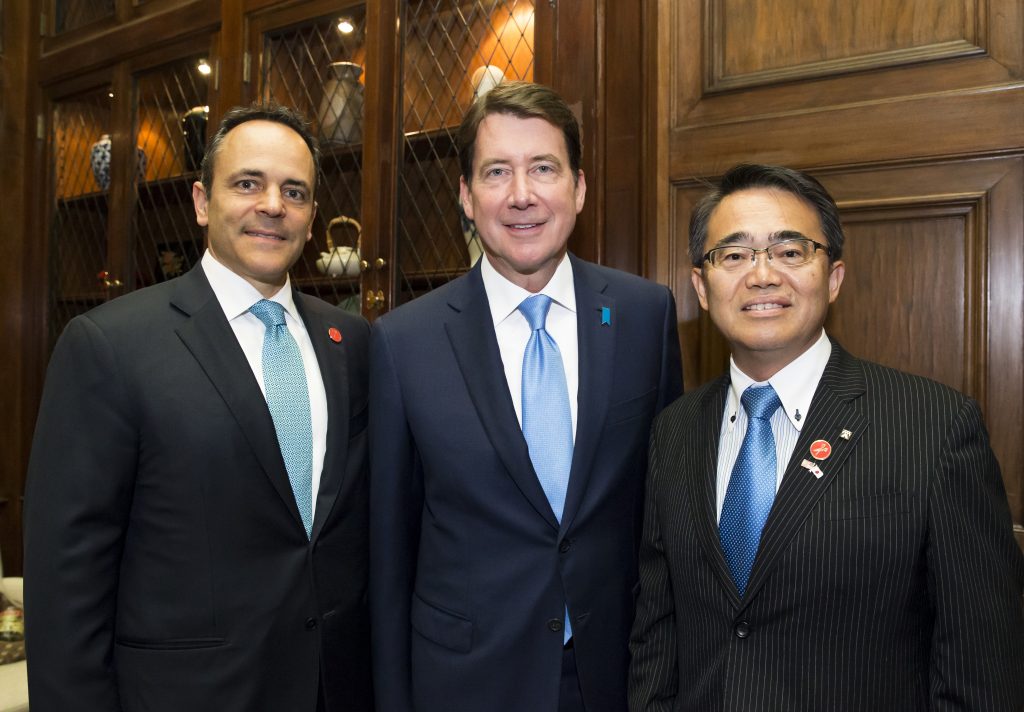 “I arrived in Frankfort on a cold, rainy day, but Governor Bevin kept me warm with great Southern hospitality and beautiful Kentucky bourbon,” Ohmura said, perfectly illustrating the friendly ties between the United States and Japan that have been augmented by a shared appreciation for fine whiskey.

Like at the Ambassador’s reception, Americans and Japanese gather all over the world to share their love for American whiskey.