“There are fewer fish, and we must go out to sea for days to find fish,” said Ricardo Laos, president of the José Silverio Olaya Balandra Association of Artisanal Fishermen of Caleta de Chorrillos in Peru. “That creates economic problems for us. Many of our families make livings from fishing.”

On October 7, the U.S. government, the Walton Family Foundation, and fishing and environmental organizations in the United States and South America launched Por La Pesca, or For the Fisheries. The new partnership will combat illegal, unreported and unregulated (IUU) fishing and make Ecuador and Peru’s small-scale fisheries more sustainable.

“Today I saw firsthand how IUU fishing threatens the health of our oceans and, as a result, the livelihoods and food security of coastal communities in Peru,” Secretary of State Antony Blinken said, announcing Por La Pesca at the Artisanal Fish Market in Lima’s Chorillos District. “It is because of this that the United States is committed to combating IUU fishing globally.”

The stories I heard today from fishers and vendors at the Artisanal Fish Market in Chorillos, Peru paint a clear picture of the threat that illegal, unreported, and unregulated fishing poses to the health of our oceans and the livelihoods and food security of coastal communities. pic.twitter.com/OHC8G2kNSk

The U.S. Agency for International Development (USAID) will contribute $5.7 million to Por La Pesca, and the Walton Family Foundation is providing $12.5 million.

The Peruvian Society for Environmental Law will lead Por La Pesca, in partnership with groups that include the Sustainable Fisheries Partnership and World Wildlife Fund Peru. Por La Pesca will promote profitable and sustainable fishing in Ecuador and Peru by helping responsible fisheries to better organize and improving access to larger markets.

IUU fishing costs the global economy billions of dollars annually and can be associated with transnational crime, forced labor and human trafficking. The U.S. government opposes destructive fishing practices and will uphold international laws and norms that protect the marine environment, according to the 2022 U.S. National Security Strategy (PDF, 562KB).

The partnerships in Peru and Ecuador will advance priorities of the U.S. National 5-Year Strategy for Combating Illegal, Unreported and Unregulated Fishing, issued October 19. The strategy calls for partnering with countries to promote sustainable fisheries, enhance monitoring of fishing operations, and ensure that only legal, sustainable and responsibly harvested seafood enters markets. 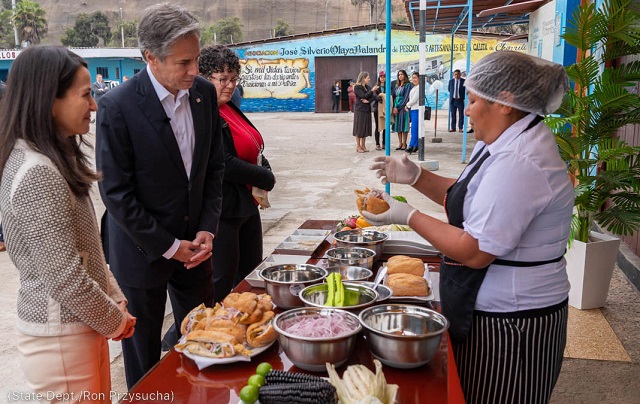 In recent years, hundreds of boats from the People’s Republic of China’s (PRC) fishing fleet, which is the largest distant water fishing fleet in the world, have fished waters outside the Galápagos Islands off the coast of South America, according to news reports. In 2017, Ecuadorian authorities caught a PRC-flagged carrier vessel with protected sharks on board.

In June, Canada, the United Kingdom and the United States launched the IUU Fishing Action Alliance to improve the monitoring, control and surveillance of fisheries; increase transparency in fishing fleets and the seafood market; and build new enforcement partnerships.

The Quad partners (Australia, India, Japan and the United States) support the Indo-Pacific Partnership for Maritime Domain Awareness, which will share technology to enable Indo-Pacific nations to better monitor their maritime boundaries and international sea lanes.

In announcing Por La Pesca, Blinken urged other countries to also support international efforts against IUU fishing. “Through this investment, the United States is championing an approach that balances conservation of marine ecosystems with equitable economic growth and the rights of small-scale fishers,” Blinken said.