As a dog lover, one of the first things I did when I arrived in Tokyo was head to Shibuya and visit the Hachiko statue just outside the station.

The story of Hachiko, a dog who waited for his owner on the same spot even after his master passed away, has won the hearts of dog lovers around the world and I was definitely one of them.

There were so many people at the statue, and it made me think about how human fondness for dogs is largely universal. Indeed, a recent study found that dogs are humans’ oldest companions. It’s not hard to think of reasons why this is true. A dog’s unlimited love and loyalty will win over almost anyone, but I have to say, speaking from personal experience, the relationship takes on greater significance when you also rely on your dog for mobility and independence.

I was diagnosed with a congenital eye condition when I was just 4 years old. Over the course of my childhood, I lost my eyesight gradually and, into my late teens, I had to walk with a cane. I’m now 37, and 12 years ago I made the decision to switch from cane to guide dog, which has been the most important and transformative decision of my life. Though it may seem like a simple enough transition, the bond between a blind person and her guide dog is hard to compare to any other relationship. I admit, there are also certain advantages to having a beautiful yellow Labrador by your side instead of a cane — nobody ever says to me, “What a beautiful cane you have” or “Why don’t we move you to business class to give your lovely cane some more room?”

I arrived in Tokyo in July 2018 with my husband, who works at the U.S. Embassy, our toddler son and my guide dog, Dunaway. Japan is a fascinating country, and we are grateful for the opportunity to live in Tokyo and learn about the culture. As a guide dog user, I came here having experienced my fair share of discrimination and myriad accessibility issues, and I’ve found that the best remedy for battling these challenges is to educate people on what guide dogs do for people like myself. In my dealings with people in Tokyo, I have discovered that, for many of them, Dunaway has been their first encounter with a guide dog.

There is a lot of curiosity and many questions that spring from these encounters, mostly about what Dunaway does and how our relationship works. Initially, I was surprised by the lack of other guide dog users in the city — it took me a year to encounter another guide dog user, whom I met when eating at a restaurant in Yokohama. I later learned that one of the biggest guide dog schools in Japan is located close to Yokohama, the Kanagawa Training Center for the Japan Guide Dog Association. 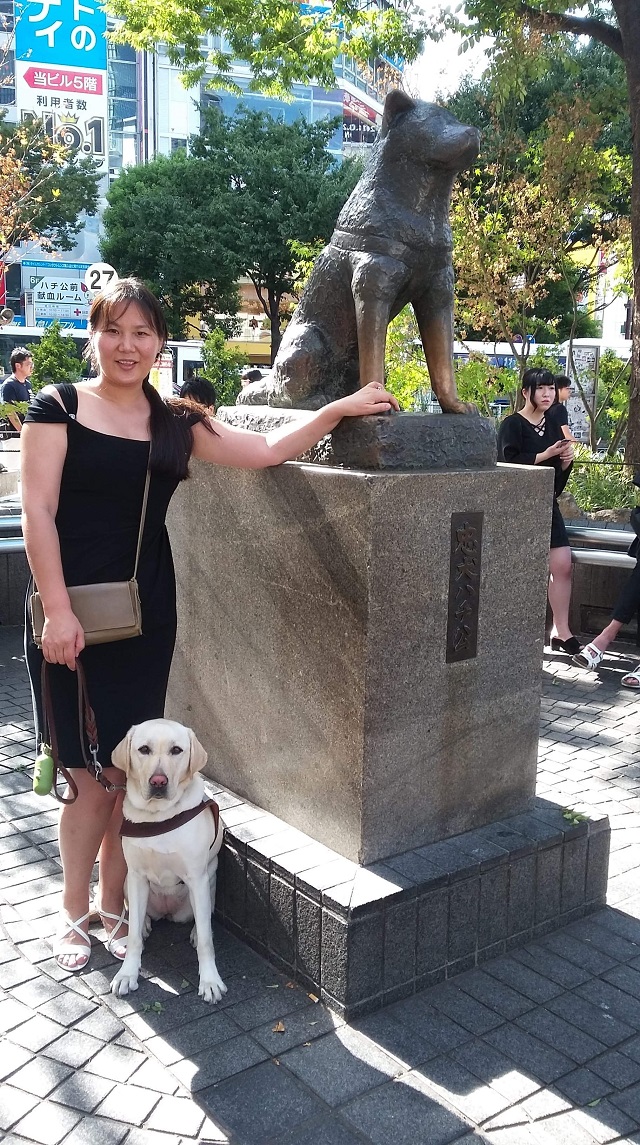 Long before we arrived in Japan, I used to work at the U.S. Embassy in Mongolia. My guide dog at the time was the first guide dog ever to set foot in Mongolia, and there was much for us to do to spread awareness about service dogs. One of the tools that helped us a lot in that effort, purely coincidentally, was a Japanese movie titled “Quill: The Life of a Guide Dog.” This movie has been translated into Mongolian and aired on national television there.

It so happened that the dog from the movie, Quill, looked very much like my own guide dog, and many were convinced that they were the same dog. After the movie aired, when I went to visit a school or when I was walking with my dog on the street, I would hear children whispering, “Look! Look! There’s that dog from the movie!” Some of them would even ask outright, “Is that Quill?” So Japan always had a special place in my memory, and the stories of Hachiko and Quill gave me hope that I would find kindred spirits here.

It is well known that Tokyo is one of the cleanest and most well-organized cities in the world. For its size and population — more than 30 million in the Greater Tokyo Area — it is incredible how orderly everything is. As a person with a disability, Tokyo is, without a doubt, the most physically accessible city I’ve ever been to.

However, when it comes to accessibility, there are two kinds: physical accessibility (slopes, ramps, elevators, audible signals, tactile paths, etc.) and attitudinal accessibility. In order to bring about a truly inclusive society, the latter plays a crucial role. As positive as my experiences have been in Japan, I do run into the occasional challenge of not being allowed into a restaurant, coffee shop or a taxi. These incidents are rare but they remind me of the importance of attitudinal accessibility and educating the public. Lack of understanding and awareness can be the foundation of discrimination and miscommunication, and far more consequential than a lack of material resources, which are merely tools. Social understanding and acceptance are the hands that put these tools in motion.

In a country that reveres Hachiko for his undying love and loyalty, I hope Japanese people will similarly embrace my dog, Dunaway, whose loyalty and guidance are critical in my daily life. From what I’ve experienced so far, I have every reason to believe they will.

Uyanga Erdenebold is a public relations and diplomacy professional with over nine years of experience working for the U.S. Department of State and in nonprofit NGOs. She currently serves as an executive board member for the Council on Diversity and Inclusion at the U.S. Embassy in Japan. Uyanga and Dunaway are committed to promoting more awareness of service dogs, diversity and inclusion. They can be reached at: Uyanga.erdenebold@gmail.com. Watch Uyanga’s TEDx talk, “Understanding and Acceptance in a Challenging World.”

The original article is here at The Japan Times.