In advance of the President’s historic trip to Asia, Advisor to the President Ivanka Trump arrived in Japan to speak on November 3 about the role women play in the global economy.

“If women close the gap with men in all aspects of work and society, it could add trillions to our annual global GDP over the next decade,” Ms. Trump said in a speech to the World Assembly for Women (WAW!) in Tokyo. Japanese Prime Minister Shinzo Abe, who had invited the President’s adviser and daughter to speak at the event, introduced her. 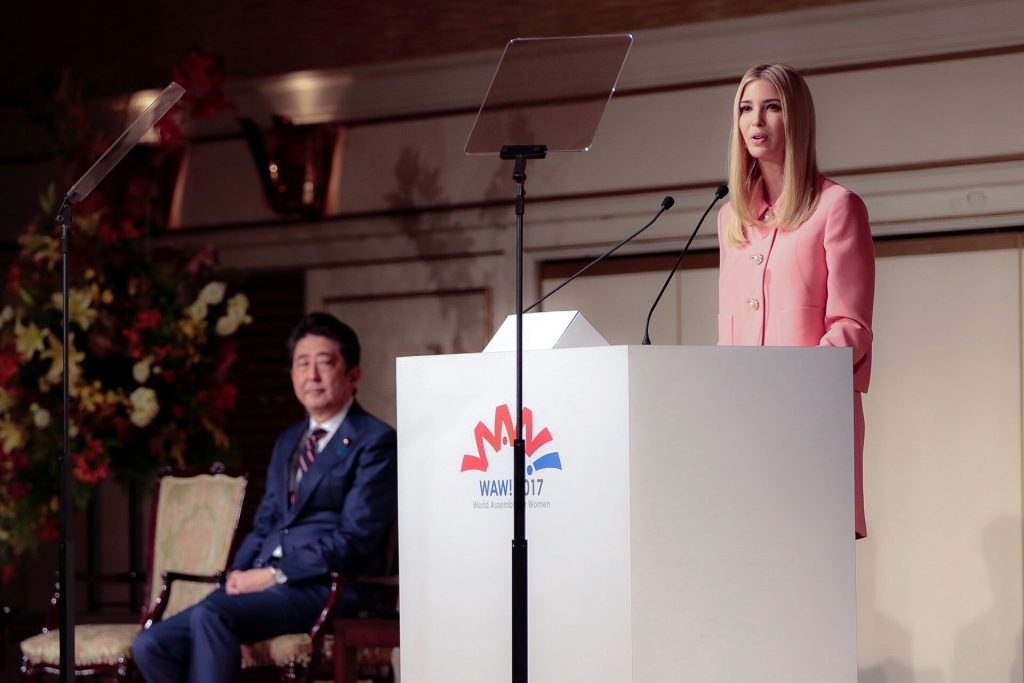 Advisor to the President Ivanka Trump speaks at the World Assembly for Women (WAW!) on November 3, 2017.

Ms. Trump urged businesses and governments to do more to promote women in the fields of science, technology, engineering, and math (STEM). “Over the coming decades, technologies such as automation and robotics will transform the way we work, and we want to make sure that women can lead in the economy of the future,” she said.

In her White House role, Ms. Trump has focused on work-life issues, workforce development, and on-the-job training programs. “The fact is, all women are ‘working women,’” she said at the conference in Tokyo “Whether they make the commute to work each morning, or spend each day with their children at home, or some combination of both.”

Ms. Trump went on to point out that “we don’t label men ‘working men’” and expressed her hope that by the time her own daughter grows up, she will not be defined by whether she works inside or outside the home and will be afforded the same opportunities as her male peers.

In addition to speaking at WAW! during her visit to Tokyo, Ms. Trump met with Foreign Minister Taro Kono, Minister for Promoting Dynamic Engagement of All Citizens Katsunobu Kato, and Minister for Internal Affairs and Communications Seiko Noda to discuss workforce development and women’s economic empowerment. Prime Minister Abe later hosted a dinner for her together with Ambassador Bill Hagerty and Mrs. Chrissy Hagerty. Ms. Trump also made time to appreciate Japanese culture and cuisine by dining at a traditional kaiseki restaurant and strolling through Hibiya Park and the Imperial Palace grounds during her visit.