The United States is committed to working with its Indo-Pacific partners to improve prosperity, recover from the COVID-19 pandemic and keep the region free and open for all.

In a major speech in Jakarta, Indonesia, Secretary of State Antony Blinken emphasized the United States’ long-standing ties to its fellow Indo-Pacific nations and highlighted recent U.S. steps to secure and improve upon those partnerships.

“We all have a stake in ensuring that the world’s most dynamic region is free from coercion and accessible to all,” Blinken said December 14. “We will work with our partners across the region to try to realize this vision.”

Blinken described a free and open Indo-Pacific as a place where people can write their futures and participate in their communities. Countries, he said, can “choose their own path, free from coercion, free from intimidation.”

He praised the Association of Southeast Asian Nations’ efforts toward a peaceful resolution of the crisis in Burma, where the military regime unleashed a brutal crackdown on the people and attempted to violently repress their calls for democracy.

To help maintain a free and open Indo-Pacific, the United States: 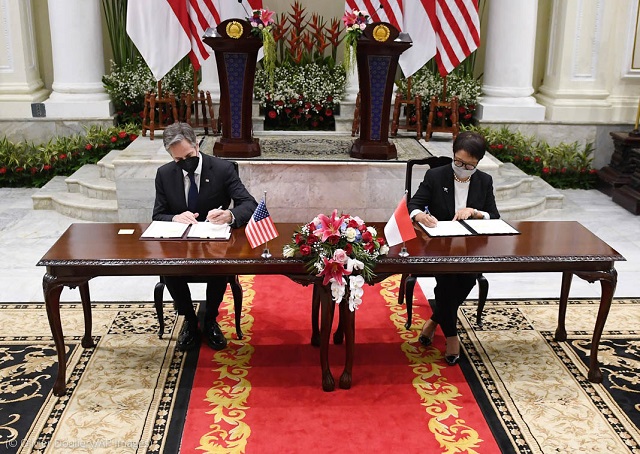 The Indo-Pacific is home to more than half of the United States’ top trading partners. The United States is the source of more than $1 trillion in foreign direct investment to the region and is expanding trade, Blinken said.

Since 2015, members of the Quad — the United States, Australia, India and Japan — have provided more than $48 billion in infrastructure financing to the Indo-Pacific, supporting thousands of energy and development projects in more than 30 countries, benefitting millions of people.

Working in partnership with COVAX, the U.S. has provided over 100 million COVID-19 vaccine doses to Indo-Pacific countries, part of the more than 1.2 billion doses it will donate worldwide before the end of 2022. An additional $750 million in U.S. aid is bringing life-saving medical and oxygen supplies to Indo-Pacific nations’ COVID-19 fight.

By working with partners, Blinken said, the U.S. has mobilized more than $7 billion in renewable energy investments in the Indo-Pacific over the last five years. In December alone, the U.S. International Development Finance Corporation announced a $500 million investment to help build a solar manufacturing facility in India.

“The Indo-Pacific is the fastest growing region on the planet,” Blinken said. The United States will remain a steadfast partner in the region that will “shape the trajectory of the world in the 21st century,” he added.