As the world denounces Vladimir Putin’s unprovoked attack on Ukraine, the private sector in the United States is showing its support for Ukraine in a number of ways.

U.S. tech company Microsoft detected a Russian malware alert in Ukraine on the eve of the Russian government’s invasion. Within hours, protective code was shared with the governments of Ukraine, Poland and other European allies, which thwarted a potentially catastrophic cyberattack.

“I’ve never seen it work quite this way, or nearly this fast,” Microsoft’s senior cybersecurity executive Tom Burt told the New York Times. “We are doing in hours now what, even a few years ago, would have taken weeks or months.”

When Washington chef José Andrés heard about the crisis unfolding in Ukraine, he took his nonprofit organization World Central Kitchen to help feed Ukrainian refugees who were crossing the border into Poland, Romania, Moldova and Hungary. 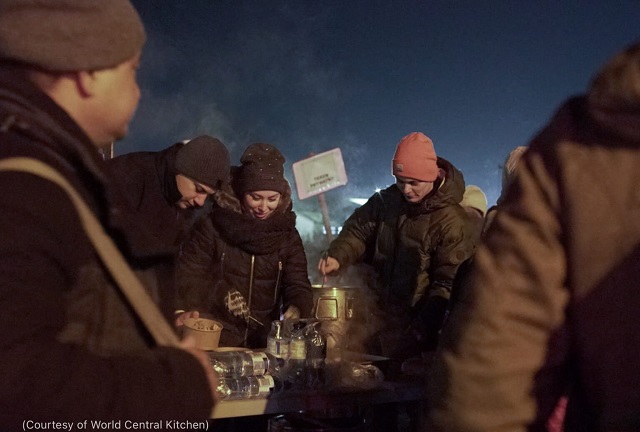 “We’re here to support everybody and empower them like we do everywhere we go,” Andrés told the Washington Post.

World Central Kitchen is also providing resources to help restaurants in Odesa and Lviv feed local people who have stayed in Ukraine. Andrés says he’s trying to figure out a way to get flour to nuns in Lviv who are feeding their community.

Similarly, U.S. housing rental company Airbnb has made free rentals available to 100,000 Ukrainian refugees across Europe. And U.S. retailer Etsy has excused all $4 million of outstanding debt from Ukrainian creators.

Many U.S. companies are severing ties with Russia and refusing to engage with the Russian government’s economy. 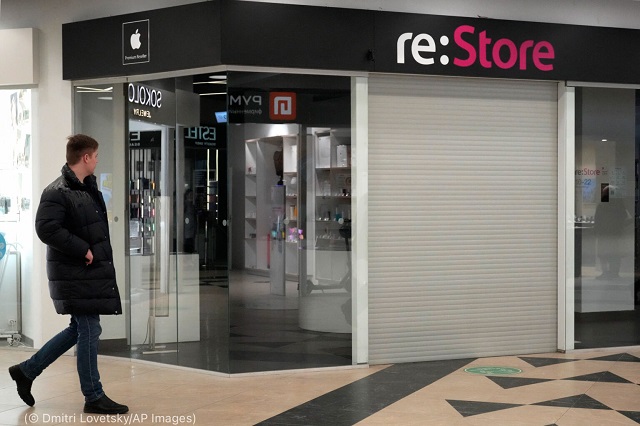 A closed re:Store, an official Apple reseller shop, is shown at a mall in St. Petersburg March 2. (© Dmitri Lovetsky/AP Images)

Since the Russian government invaded Ukraine: