After being postponed for a year, the Tokyo Olympics are finally upon us. Many athletes around the world have been training hard until the very last minute for the popular international sporting event. Sakura Kokumai is a Japanese American karate athlete who has been selected to represent Team USA in Karate Kata. She is currently ranked sixth in the world for Female Kata and has her sights set on a gold medal in the Tokyo Olympics. During an online interview, I asked Kokumai about her development as an American athlete of Japanese descent, the differences between the karate training environments in the United States and Japan, and her thoughts on the upcoming Tokyo Games.

Development as a Japanese American Athlete

Kokumai was born in Hawaii. After traveling back and forth between the United States and Japan as a child, she decided to go to college in Japan. The karate culture in Japan is what made her decide to leave the country where she grew up to challenge herself by training in a new environment, the country where her parents are from and where she still has strong family connections.

Tokyo 2020 will be the first Olympic Games to feature karate as an official sport. Since karate is not generally considered to be a professional sport in the United States, Kokumai needed to focus on academics in addition to karate. She knew that Japan was the best place for her to get top-notch karate training in addition to a high-level education.

“It was definitely tough, but probably the best choice I’ve ever made to come to Japan,” says Kokumai. “Karate in Japan is what basketball or football is here in the U.S. I knew I was going to get the best education and best karate practice in Japan.”

Upon graduating from high school in Japan, Kokumai chose to study at Doshisha University, where she built many relationships and practiced karate in a way that shaped who she is today. “To be able to practice karate in the country where it originated from was definitely the best experience I had,” she says.

Sakura Kokumai (bottom right) in her senior year at Doshisha University. She won second place for Team Female Kata division at the All Japan University Championships in Tokyo at the Budokan.

Growing up, Kokumai was very athletic and was involved in a wide range of sports such as swimming, soccer, and tennis. Out of all these sports, why did she end up focusing on karate?

“One thing I loved about karate was it was something I could work on every day,” says Kokumai. “It wasn't about who can run the fastest within time, or who can lift the heaviest weight. It was really working on yourself and doing something every day. I think that martial arts mindset of doing your best and the culture of putting 100% effort into it was something that made me fall in love with the sport.”

During high school and college, Kokumai placed herself in the Japanese traditional environment of bukatsu, or club activities. She explains that the culture surrounding karate in Japan is very different from that in the United States. In Japan, karate athletes are given opportunities to receive support through competitions, college scholarships, and employment. People see karate as a sport in Japan, but that is not the case in the United States. American karate athletes often face a very challenging situation in terms of striking a balance between academics and sports.

Nonetheless, Kokumai feels that the passion for the sport is the same. “People in the U.S. love karate, and they just do it because they love it. Here whenever I'm training, I’m around people who love the sport. They are not being forced to do it, but they do it because they love it. We have all sorts of people practicing karate from all different age groups. It's definitely a fun world to be in.” 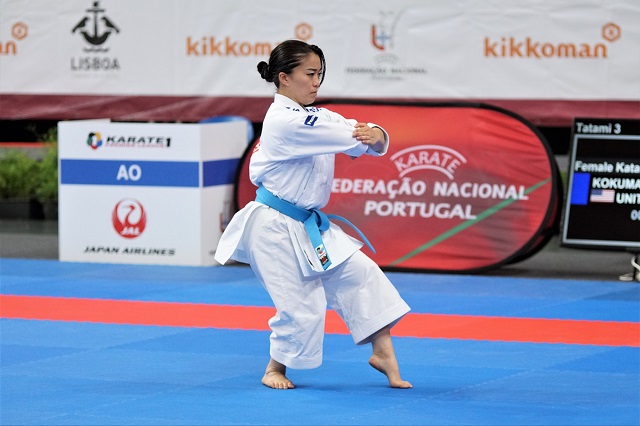 “The 2020 Tokyo Olympics is something that cannot be compared to any other event I’ve competed in,” Kokumai says, smiling broadly. She says that she has always had an “amazing time” when she’s visited Japan in the past, and her experience with the language and culture are bound to make her feel at home.

When she first heard that the 2020 Tokyo Olympics were going to be postponed, Kokumai says, a lot of emotions went through her head. “It was a challenge to find a place to train, people to train with, or just to figure things out from zero. It was definitely a setback, but as athletes we are trained to bounce back from any challenges that come our way, so I tried to stay positive.”

Before the pandemic, Kokumai says, she used to travel every two to three weeks to different countries to compete. “It was difficult to not only be in one place, but also to not know what the next event will be.” She adds, “As athletes, we are trained to peak at a certain time, so when we don’t have that goal, it is difficult to train.”

During such difficult times, Kokumai and her teammates relied on each other for support. Thanks to the rapid distribution of vaccines, things are finally getting back to normal in the United States. She recently invited her teammates spread across the country to California to train with her over the weekend. “I’d spent a lot of time training on my own,” she says, “so it was the first time in so long where I was able to hang out with my karate friends. Training is important as well, but it makes things better when you have people around you to train with.”

Throughout the interview, one thing Kokumai repeatedly expressed was gratitude. She says that without the support of people in Japan and the United States, she would not be where she is now. By interviewing her, I could sense that she is not just strong physically but also has a kind heart that warms everyone around her. Kokumai will definitely inspire American and Japanese fans alike through her performance in the Olympic Games.