When Americans choose their representatives, polling places nationwide accommodate voters with disabilities, thanks to the landmark Americans with Disabilities Act (ADA) of 1990.

“Whoever is doing the election [has] the responsibility to ensure that their voting places are accessible to voters with disabilities,” says John Wodatch, who was chief of the U.S. Department of Justice’s disability rights section before retiring in 2011.

The ADA paved the way for the Help America Vote Act of 2002, which requires jurisdictions conducting elections to provide each voting precinct with at least one machine that blind and visually impaired voters can operate independently and privately. The machine must also be positioned appropriately. And, under the historic Voting Rights Act of 1965, staff must be on hand to escort voters with disabilities to the machine and help them use it if they request assistance. 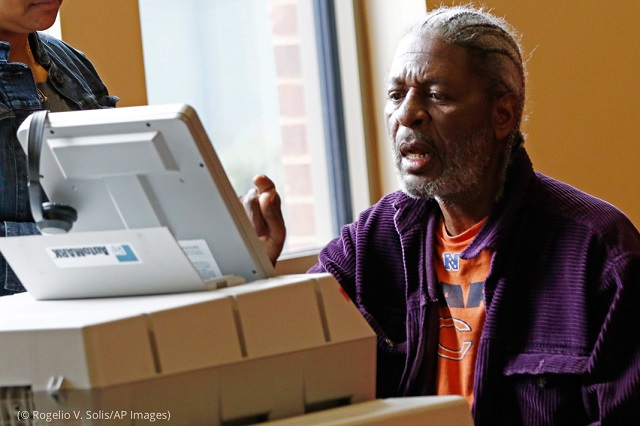 Before that 2002 law, Wodatch notes, the ADA had already required poll workers to give instructions to voters with hearing impairments. ADA provisions also require poll workers to help voters with developmental disabilities when needed, even if that means helping them mark a paper ballot, Wodatch says.

The height of the voting machine or ballot reader must be at an accessible level for voters who use wheelchairs.

When Eboni Freeman voted for the first time in 2015, she remembers a “very kind individual” who was working at the polling station asking if she needed assistance. Freeman has fibromyalgia and systemic lupus erythematosus, which cause fatigue. While she appreciated the assistance, she decided to go it alone.

“Because of my disability, I did take a little longer to make sure that I followed every step correctly,” Freeman says. 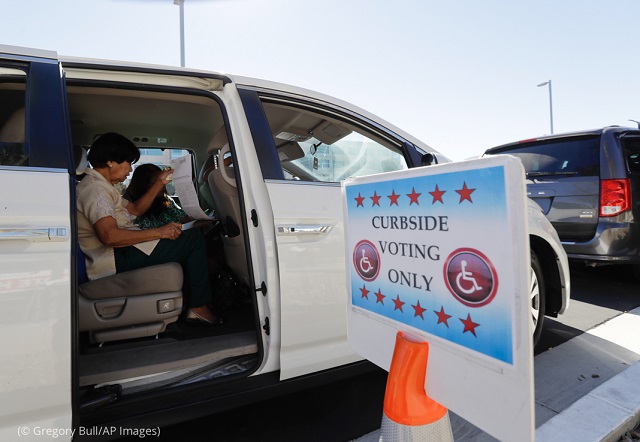 Under the ADA, all polling places — including entrances, designated parking spaces and aisles — must be accessible. Workers ensure that people with mobility issues can enter and exit with ease. Also, election officials must make sure that service animals are allowed into the polling place.

In some circumstances, when officials are unable to identify an accessible polling place or one that can be made temporarily accessible, they may use alternate methods, such as curbside voting. While absentee ballots may be offered to voters with disabilities, they cannot take the place of in-person voting for those who prefer to vote at the polls on Election Day.

Routes to the polling places must be accessible as well. For blind voters, that means there can’t be any protruding objects, such as signs or tree branches, along a hallway or sidewalk. Branches must be trimmed so voters who are visually impaired or using wheelchairs don’t bump into them.

To support accessible voting, the Department of Justice created the ADA Checklist for Polling Places and Solutions for Five Common ADA Access Problems at Polling Places, which help officials determine whether a polling place has the features needed by most voters with disabilities or can be made accessible using temporary solutions.

If the polling stations are not accessible, the Department of Justice can initiate an enforcement action against the government entities in charge of the election. In such instances, the department typically negotiates with local authorities to reach a settlement that complies with the law.

“It’s not something that’s precedented and seen in other countries,” says Virginia Atkinson, senior global adviser on inclusion for the International Foundation for Electoral Systems.

The changes mandated by the ADA and the Help America Vote Act are bearing fruit. In the 2016 presidential election, more than 16 million citizens with disabilities voted, according to the U.S. Census. That’s up from 15.6 million citizens with disabilities who cast their ballots in the 2012 presidential election, according to the U.S. Census.

“It is a bedrock American principle — the right to vote, the right to participate in our government,” Wodatch says. “There could not be a more essential right.”