The United States is rejoining the Paris Agreement, renewing its commitment to partnering with other nations to tackle the global threat of climate change.

“There is no time to waste,” Biden said in the Oval Office, as he signed a U.S. acceptance of the agreement. “We’re going to combat climate change in a way we have not before.”

The United States was instrumental in crafting the Paris Agreement under which nations have committed to reducing greenhouse gas emissions and holding “the increase in the global average temperature to well below 2° [Celsius] above pre-industrial levels.”

Biden’s action formally returns the United States to the agreement in 30 days and affirms the United States’ commitment to the more than 190 nations that are part of the pact. It is one of a series of actions Biden took on his first day in office.

“Our nation will be back in position to exercise global leadership in advancing the objectives of the agreement, including keeping the world at a safe temperature,” the White House said in a January 20 tweet.

Biden aims to ensure the United States achieves a 100% clean energy economy and net-zero emissions by 2050. In his first year, he will urge Congress to establish an enforcement mechanism to ensure key milestones are met no later than the end of his first term in 2025.

Biden has appointed former Senator and Secretary of State John Kerry climate envoy for national security to lead the effort. The appointment marks the first time a member of the National Security Council will focus exclusively on addressing climate change, according to the Associated Press. 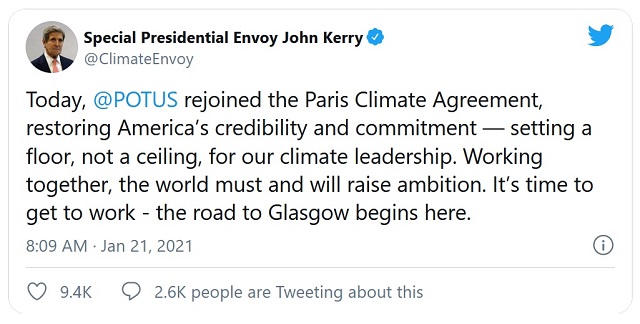 As America’s top diplomat during the Obama administration, Kerry was an architect of the Paris Agreement. The prior administration withdrew from the deal November 4.

Biden has said achieving a clean energy economy, “is not only an obligation, it’s an opportunity” to revitalize the U.S. energy sector with new industries and high-quality jobs.

His administration will call for historic investment in clean energy innovation and climate change research, and expand on the United States’ past success in reducing emissions.

The United States has reduced emissions from fossil fuel combustion by more than 15% between 2005 and 2019, according to the International Energy Agency. The reductions have been spurred by innovative energy technologies, including nuclear energy, shale gas, transformational coal technologies, renewables, battery storage and enhanced energy efficiency.

“From coastal towns to rural farms to urban centers, climate change poses an existential threat — not just to our environment, but to our health, our communities, our national security, and our economic well-being,” Biden said.

Banner image: The United States is renewing its leadership in battling climate change, which is contributing to the melting of icebergs such as this one off Ammassalik Island in Greenland. (© John McConnico/AP Images)

Frederick Douglass: A Symbol of Freedom beyond America’s Shores

Black Women Have Always Been Leaders for Voting Rights