The United States’ largest solar farm is under construction.

Doral Renewables, an Israeli company, is constructing a 5,260-hectare solar farm across Starke and Pulaski counties in the state of Indiana. The project will cost $1.5 billion, take two years to complete, and — once finished — power 75,000 homes.

“I’ve never in my life seen anything like this project here,” Starke County Commissioner Mark Gourley told AP News. “This energy that we harvest here in Starke County is going to enrich lives throughout the county.”

The rise of solar

A solar farm is a large facility of photovoltaic panels that convert energy from the sun and distribute that energy to a centralized power grid.

Earlier this year, a Department of Energy report found the United States can source 40% of its electricity supply by 2035 and 45% by 2050 with solar energy. 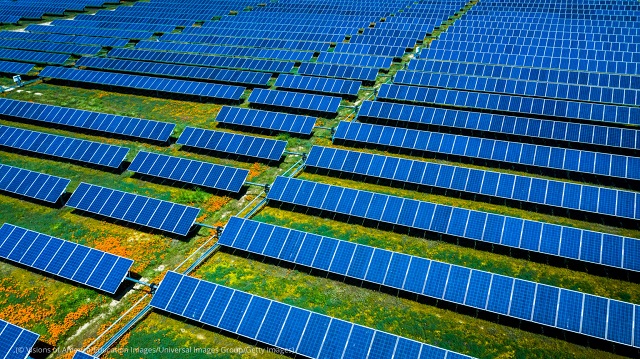 A solar farm near Lancaster, California, turns the sun’s light into electricity through these panels. (© Visions of America/Education Images/Universal Images Group/Getty Images)

The United States is home to over 2,500 solar farms, several of which can power hundreds of thousands of homes.

When it was built in 2015, the Solar Star facility in Rosamond, California, was the largest solar farm in the world.

Today, it continues to generate enough solar energy to power 255,000 homes annually. Over the course of 20 years, the carbon dioxide the facility will save from entering the atmosphere will equal taking 2 million cars off the road, making a contribution to meeting U.S. climate commitments.

Banner image: Westlands Solar Park in the San Joaquin Valley of California is one of the largest solar facilities in the United States. (© Carolyn Cole/Los Angeles Times/Getty Images)