This is part of a series of articles highlighting the costs of Vladimir Putin’s aggression in Ukraine. This interview took place before the Russian military further invaded Ukraine on February 24.

Before Russian forces invaded Ukraine in 2014, Oleksandr traveled around the country, worked as a satellite communications engineer, and raised a family with his wife.

Oleksandr said his hometown of Mykolayiv in the south of Ukraine was “under threat of capture” when the Russian military illegally seized Crimea and invaded parts of eastern Donbas in 2014. So he joined the Armed Forces of Ukraine as a volunteer. He was 47 years old and had no military experience.

“Peaceful, sovereign Ukraine for me is a country where human life and freedom always come first,” he said. 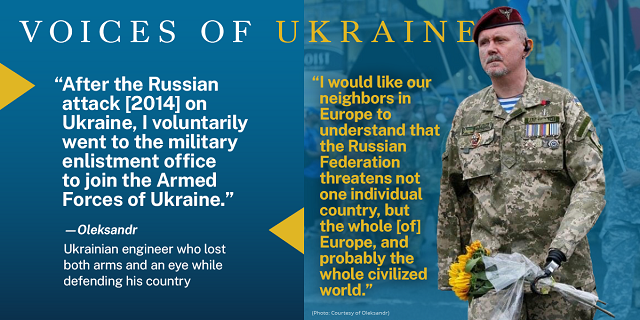 During the fighting in 2014, Oleksandr lost both arms and an eye. He said he had to “learn to live again.”

In the seven years following the 2014 invasion, Oleksandr and his friends created a nonprofit association that helps veterans adjust to civilian life.

For two years, he also worked in the Ministry of Veterans Affairs, where he helped establish a national military memorial cemetery in Ukraine. Oleksandr also helped create a book of memories of volunteer battalions who gave their lives for Ukraine’s independence.

“Russia wants to deprive Ukraine once and forever of their right to self-determination, the right to live as we want,” he said.

Oleksandr said many of his friends in 2014 in Crimea and the Donbas region of Ukraine lost their homes and jobs and had to rebuild their lives.

“I want our neighbors in Europe to understand that the Russian Federation threatens not just one individual country, but the whole [of] Europe, and probably the whole civilized world,” he said.

“As a veteran, despite the fact that I have serious injuries,” he said, “I am determined to defend my country under any circumstances.”

Learn more about Oleksandr’s story in this short video and from other Ukrainians, including Nataliya, Stanislav and Andriana.

Banner image: Oleksandr worked as a satellite communications engineer before the Russian military invaded Ukraine in 2014. (Courtesy of Oleksandr)