When NASA engineers need a name for a robotic Mars “rover,” they know where to find creativity. They turn to America’s young people.

More than 28,000 students — from kindergarten through 12th grade — submitted names for the rover that landed on Mars last month. It was Alex Mather, a Virginia seventh-grader, who won the contest with his suggestion, “Perseverance.”

But 155 semifinalists went along for the ride: Their names are etched in tiny lettering on the rover now exploring Mars and sending images back to Earth.

The naming contests boost students’ interest in science, technology, engineering and math (STEM). For the students, “it is an exciting way to engage with a rover that will likely [be] collecting and caching core samples from the Martian surface for scientists here on Earth to study,” said Jim Bridenstine in 2019, when he was NASA administrator.

Perseverance has its own Twitter handle, which lists hobbies of “photography, collecting rocks, off-roading.” But kids were giving rovers personality well before the first tweet was even sent. 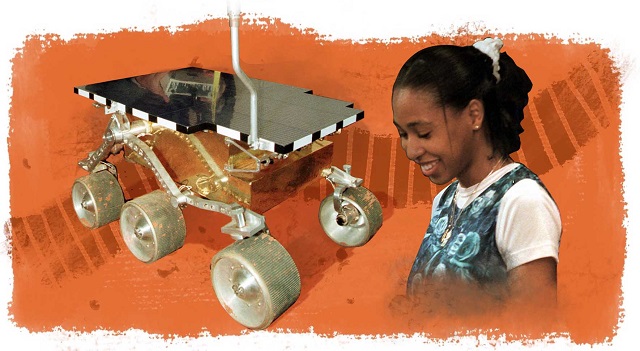 “She is on a journey to find truths about Mars.”
~ Valerie Ambroise, 12

Valerie Ambroise, of Bridgeport, Connecticut, was 12 when she named this rover Sojourner.

Sojourner means traveler, of course, but Ambroise named this rover specifically for Sojourner Truth, an African-American champion of abolition and women’s rights during the U.S. Civil War era.

”It’s only logical that the Pathfinder be named Sojourner Truth, because she is on a journey to find truths about Mars,” Ambroise said at the time. She said it would take a strong personality to undergo the “harsh conditions” of Mars.

The abolitionist, who had once been enslaved, survived “many harsh conditions,” Ambroise noted.

“I looked up at the sparkly sky and … I dreamed I could fly there.”
~ Sofi Collis, 9

Sofi Collis was in the third grade in Scottsdale, Arizona, when she named these twin rovers.

Born in Siberia and adopted in the United States, Sofi possessed a strong spirit and appreciated opportunities. She explained to NASA, “I used to live in an orphanage. It was dark and cold and lonely. At night, I looked up at the sparkly sky and felt better. I dreamed I could fly there. In America, I can make all my dreams come true.” 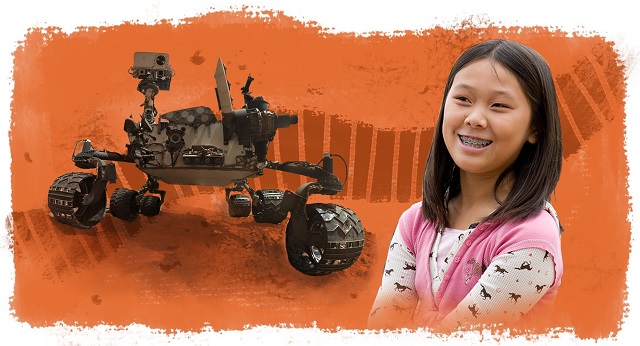 “We have become explorers … with our need to ask questions and to wonder.”
~ Clara Ma, 12

Clara Ma, of the Kansas City, Missouri, area, was a sixth-grader when she named Curiosity. “Curiosity is the passion that drives us through our everyday lives,” Ma wrote to NASA.

The name is interesting because Ma has since admitted that she was “really, really shy.”  Winning the naming contest, she said, changed her. “Life would not be the same if I hadn’t spoken up to articulate my thoughts,” she said.

Since telling NASA that “we have become explorers and scientists with our need to ask questions and to wonder,” Ma has graduated from Yale University with a degree in geophysics and from the University of Cambridge, in England, with a master’s degree in environmental policy.

“Thinking about sending a robot to another planet made me realize how special and fragile life is on Earth,” she said. “I realized that studying the Earth was the most important thing I could do.” 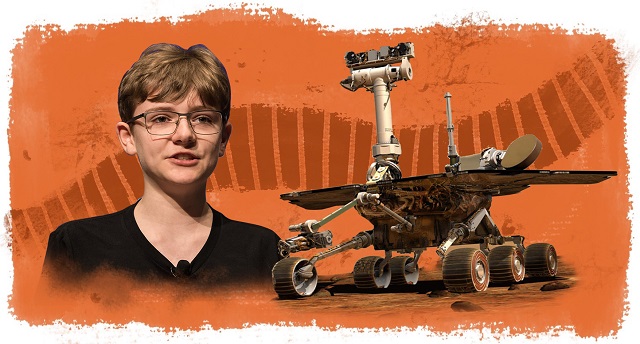 “We will meet many setbacks on the way to Mars. However, we can persevere.”
~ Alex Mather, 13

Alex Mather was a seventh-grader in a Virginia suburb of Washington when he named Perseverance. He wanted a name that followed from the earlier rovers’ names.

“All of these names of past Mars rovers are qualities we possess as humans,” he wrote NASA, but “we missed the most important thing. Perseverance.”

“We will meet many setbacks on the way to Mars. However, we can persevere,” he wrote.

Alex said his interest in exploration was sparked when he got a trip to space camp for his 11th birthday and saw a model of the Saturn rocket. “I immediately knew space is something I was doing for the rest of my life,” he said. “My all-time dream would be to be the leader of the Mars program.”