Iowa and New Hampshire represent a tiny portion of the American electorate, yet candidates for the two major U.S. political parties who want to be president spend months tromping through the snow to win the support of voters there.

That’s because Iowa and New Hampshire voters take the first steps in winnowing the field of candidates of the two major parties to one Republican and one Democratic candidate who will appear on the November 3 general election ballot. (Independent candidates and candidates from the other political parties go through a different set of challenges to get onto the ballot.)

Candidates visiting Iowa plunge through state fairs to shake hands, drop in to diners and generally spend more time hearing from voters directly than they do at any other point in the election cycle. Supporters of the system say that sort of retail politics helps keep candidates tuned in to what the country really wants.

Each party will have a nominating convention this summer to officially name its candidate. Those conventions have delegates who will have been selected by the 50 states, the District of Columbia and five U.S. territories, with more populous states getting to send more delegates.

Some states (e.g., Iowa) choose those delegates — or convention voters — through a caucus system. Others (e.g., New Hampshire) use a primary vote.

What is a caucus?

A caucus is a local gathering of voters for a given party, often in a library, a school or a neighbor’s living room. Citizens argue the case for their favorite candidates. As the meeting wears on, some less-popular candidates are eliminated. Their supporters are recruited by people pushing for other candidates. It’s how many presidential delegates used to be chosen, though the number of states using the system has dwindled. 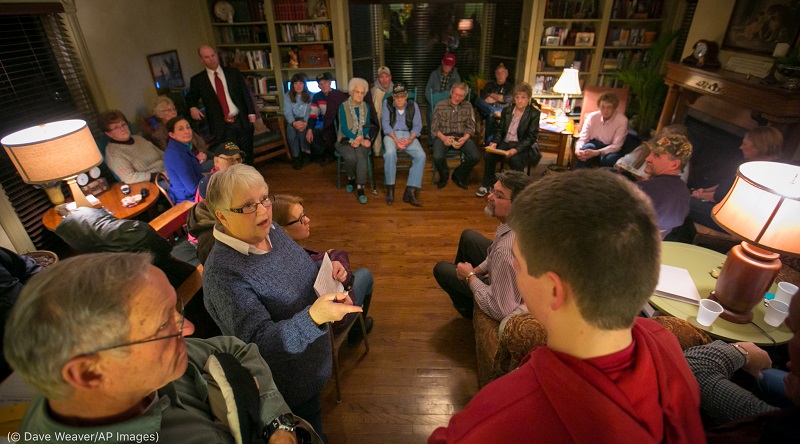 What is a primary?

Many states now hold a primary — where a secret-ballot vote is run by the state. In these cases, each state sets its rules on who can vote in the primary. (In some states, the primary is run by the party.) Open primaries allow any registered voter to cast a ballot, even those from another party. Closed primaries mean only voters registered for a particular party may vote for the candidates of that party. Some states allow a given party’s members and unaffiliated voters (independents) to vote in a party’s primary.

Donald P. Green, a professor of political science at Columbia University, says caucuses and primaries tend to attract more-conservative-than-average Republicans and more-liberal-than-average Democrats. “One of the concerns about a primary system is those voters tend to be activists and more ideologically committed,” Green said.

Who goes to nominating conventions?

Once primary voters choose, the results are used to pick delegates. In Democratic primaries, the process is proportional. So, for a state with 10 delegates to send to the convention, a candidate who won 40 percent of the primary votes would get four delegates, and so on. Republicans do that in some states but in other states choose other allotments, such as “winner-take-all,” where the top Republican candidate gets all the delegates.

If smaller states have fewer delegates voting at the respective major party’s national convention, why do candidates spend so much time in Iowa and New Hampshire — dodging moose and blizzards? (One candidate, Senator Chris Dodd, even moved his family to Des Moines, Iowa, and registered his daughter to attend kindergarten there before the 2008 election.)

Iowa is first. New Hampshire, next.

Critics say it’s not right for these two states to have so much influence every four years. They argue that neither is typical, so they aren’t a fair representation of voters. They’re less ethnically and racially diverse than the U.S. is overall, and New Hampshire’s median age is older than the country’s as a whole.

But many voters in Iowa and New Hampshire take their charge seriously. They follow the campaign closely and show up for events for multiple candidates to hear what they stand for.

Decades ago, nominating conventions were suspense-filled affairs where backroom deals often helped decide who would win the party nomination. With so many states holding primaries or caucuses early on, the apparent nominee is usually clear much earlier.

February through June
After Iowa and New Hampshire, Democratic primaries will be held in Nevada and South Carolina. Then, on March 3, so many states vote at once that it’s called Super Tuesday. Forty percent of the delegates will be allotted that day. Some state Republican parties will skip the process this year because President Trump is running for re-election.