Walk into a coffee shop early in the morning anywhere in the world and you’re likely to be met with a tranquil scene of people tapping on their laptops, scrolling through their phones, or having muted conversations as they sip on their beverages of choice. But on certain mornings in various locations in Okinawa, you might come across something a little more dynamic – perhaps a long community table packed with a multicultural crowd engaged in animated discussions or a whole section of the restaurant filled with clusters of young Americans in military uniforms cheerfully socializing in English with local residents. 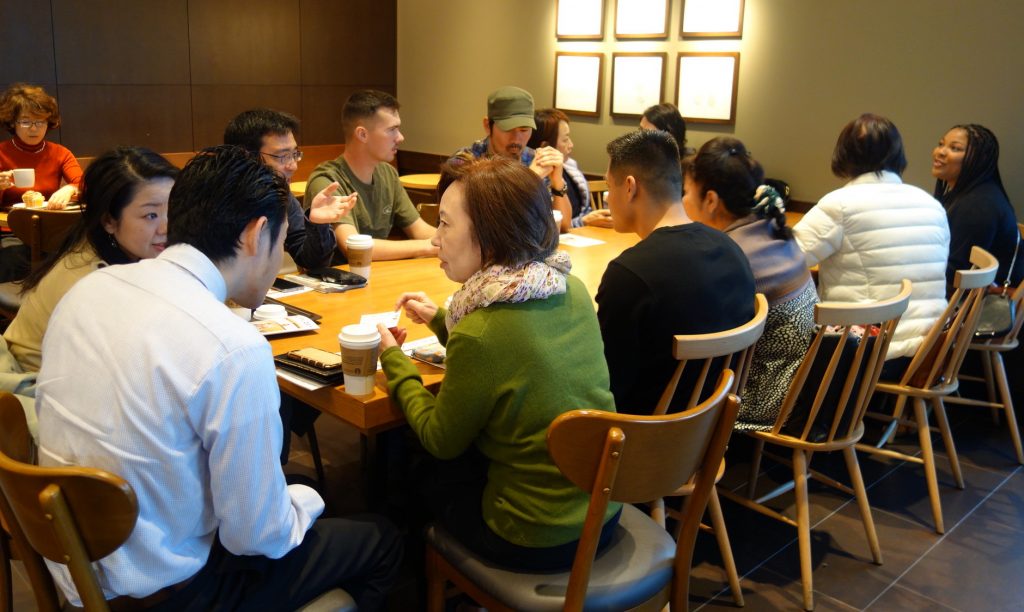 What’s going on here? you might wonder. Isn’t there a rule against having this much fun before eight in the morning? And how did all these Americans from U.S. military bases become friends with these local residents?

The scenes you are witnessing are asakatsu English conversation coffee hours organized by the U.S. Consulate General Naha. The program was launched in 2010 to bring together Americans from the bases and local community members who are eager to learn English. By interacting regularly with Americans living in Okinawa, residents of Okinawa can get to know Americans as individuals and deepen their understanding of the United States as a country. At the same time, Americans from the bases can learn about Okinawan culture and hear the perspectives of local residents. 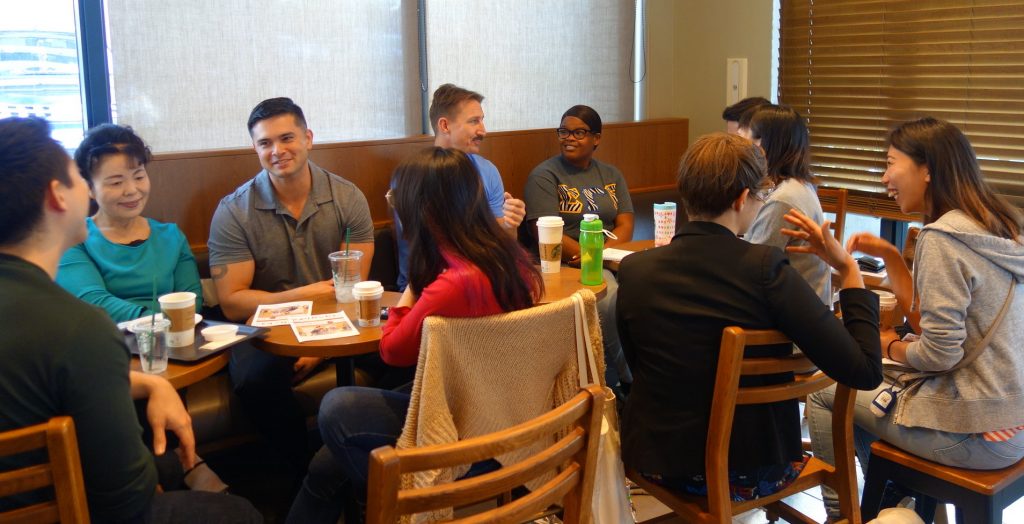 Americans from the U.S. military community and Okinawa residents converse at a coffee shop in Chatan.

The program started modestly one day in 2010, when American consulate staff sat down with people from the community at a local coffee shop to practice English over coffee. There were no textbooks or lesson plans, no nametags or appointments, just informal conversation. Since then the asakatsu have grown steadily and now take place at five venues across Okinawa ten mornings a month. Each location is supported by a representative from a different branch of the U.S. military who encourages base personnel to take part.

"This event allows local residents and service members who may never sit together to come together and build personal relationships while learning English,” says Eisha Furuta, community relations specialist with U.S. Navy Fleet Activities Okinawa. “So by creating this people-to-people setting, we are able to strengthen the U.S.-Japan partnership."

Separate English language conversation groups have also started springing up apart from the morning meetings. In one of these groups, military members and Okinawa residents meet regularly for yukatsu evening sessions at a local ice cream shop. Asakatsu participants are also using messaging apps to connect with each other to organize events such as beach barbecues.

Another activity that allows Okinawa residents to leverage the U.S. military presence in Japan to improve their skills is the Bridge Program, administered by the University of Maryland Global Campus (UMGC). The five-course program, taught at campuses located on U.S. military bases, is designed to improve local students’ academic English skills to help them prepare for the U.S. higher education system and orient them to Western-style university life. Consulate General Naha sponsors 10 students in the Bridge Program each year by providing tuition and tracking their progress, and many seek further education at U.S. universities.

“I believe that the Bridge Program is beneficial to both the local Okinawan community and military here,” says Program Manager Jackie Cillizza. “Students from Okinawa have the chance to study at a U.S. university without leaving home. After students complete the program, many go on to take regular classes with military students. The military members get to meet local residents who are not necessarily base affiliated, and the local residents get to interact with military members on a personal level.”

Besides educational opportunities, local residents are engaged in a wide range of other positive exchanges with U.S. military personnel in Okinawa. “We have many activities on the camp,” says Colonel Jason Perry, commanding officer of the 4th Marine Regiment, based at Camp Schwab. “We invite our community to join us for events like Christmas, Easter, and Schwab Fest. That’s an all-out festival with bands and music and games and yatai vendors that serve American-style food. Normally the response from the broader community is just amazing.” 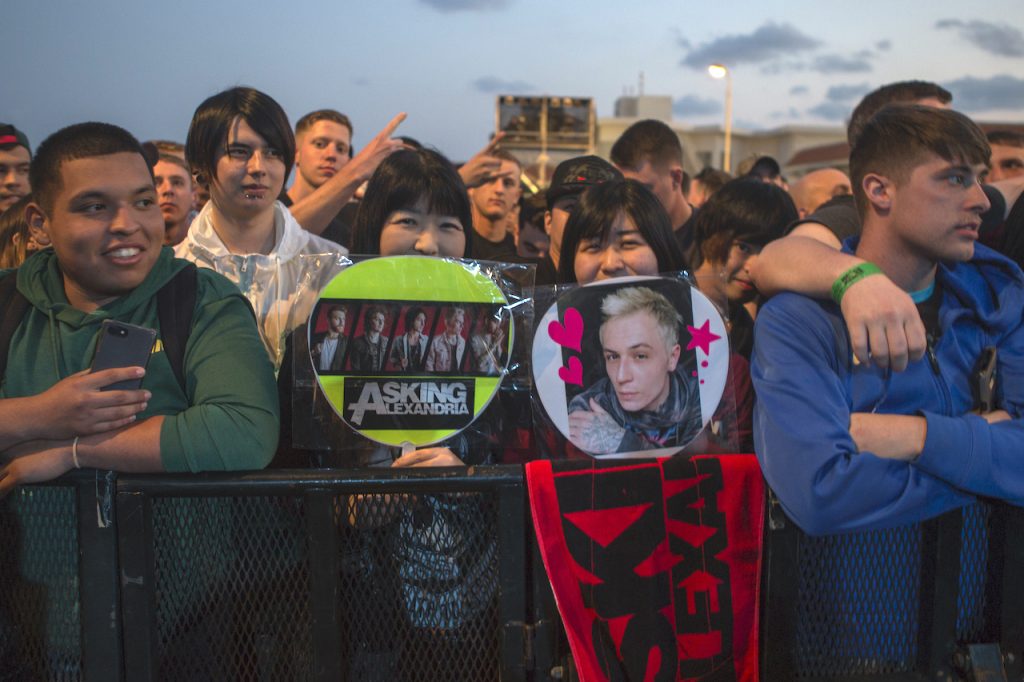 Fans from the local community pose with their signs before rock band Asking Alexandria takes the stage during the Schwab Fest on March 24, 2018, at Camp Schwab, Okinawa. (U.S. Marine Corps photo by Cpl. Danielle R. Prentice)

For Colonel Perry, connecting with the local community comes naturally. He’s practiced karate since before he can remember at the North Carolina dojo run by his father, who began training in Isshin-Ryu Karate when he was stationed in Okinawa as a U.S. Marine in 1964. Colonel Perry speaks fluent Japanese and has lived and been posted in various locations in Japan since he was 19.

Colonel Perry explained that when he assumed command of the 4th Marine Regiment, the mayor of Henoko presented him with a flag that designates Camp Schwab as the 11th Residential District of Henoko. “We treat each other in a way that members of any community would treat each other. We don’t see ourselves as building a relationship with the local community; we are a part of the local community. If we’re going to do the dragon boat races, the 11th Residential District lines up behind the nobori and we participate. Or if it’s the Okinawa sumo wrestling, we’re there. Why? Not as guests; we’re part of the community. It’s reciprocal.” 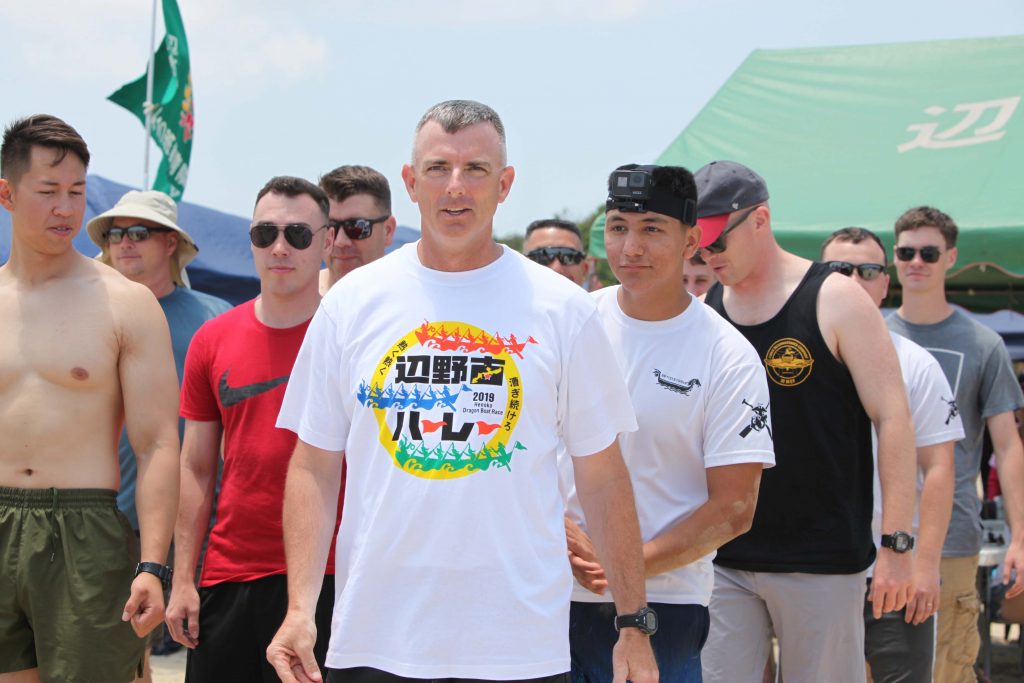 A team from Camp Schwab led by Col. Jason Perry prepare to start a race in the Dragon Boat Races in Henoko on May 12, 2019.

Whether it’s through practicing English over a cup of coffee or upholding local tradition by competing in dragon boat races, the American and local residents of Okinawa are constantly interacting and deepening their mutual understanding in myriad ways. By doing so, they’re adding value to each other’s lives and strengthening the people-to-people ties that are the building blocks of the U.S.-Japan Alliance.