The Queen of Soul: An Appreciation

The National Museum of African American History and Culture mourns the passing of Aretha Franklin, the Queen of Soul. Her voice, one of the most captivating sounds of the twentieth and twenty-first century, was unrivaled and changed the landscape of American music.

Ms. Franklin gained most of her musical training as a young girl, singing Gospel in the New Bethel Baptist Church in Detroit where her father, the Rev. C.L. Franklin was pastor. She began performing professionally in her early teens eventually signing a contract with Columbia Records in 1960. During her time with Columbia she recorded show tunes and standards. Her career skyrocketed when she signed with Atlantic Records in 1967 and traveled to Muscle Shoals, Alabama to record I Never Loved a Man (the Way I Love You).

By the early 70s, Aretha Franklin was a legend. Her voice defined the meaning of soul. What distinguished her from other singers was not the wide range of the music she recorded or the unusual beauty of her vocal instrument but her keen musical curiosity and her intelligence. With her rich tone and extensive vocal range, Franklin displayed her musical talents through her phrasing, her rhythmic variations, her dynamics, and her huge gallery of tone colors --all drawn from her African American gospel roots. It was she who brought the melisma—singing a series of notes over a single syllable—into popular music.

I accepted her title as the Queen of Soul easily but I didn’t know what that really meant until I saw her perform during the 1998 Grammy Awards. She used that setting to sing an aria from the Puccini opera “Turandot.” It was “Nessun Dorma,” one fiendishly difficult aria written for the male tenor voice and recently popularized by the Italian tenor, Luciano Pavarotti. Stepping in at the last minute for an ailing Pavarotti, Ms. Franklin took his signature aria and transformed it into something all her own. I was transfixed and the world was treated to something truly astounding. 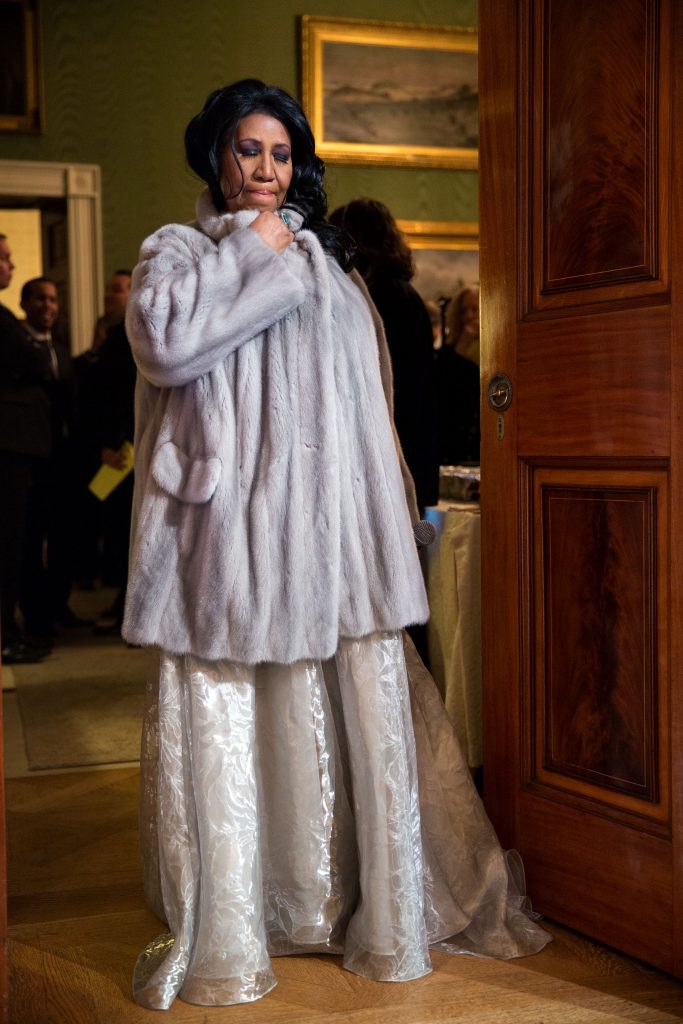 "The Queen of Soul — Aretha Franklin — was waiting for her cue during "The Gospel Tradition: In Performance at the White House" when I noticed her close her eyes in silence for a few seconds while standing in the doorway between the Green Room and East Room before she was ready to begin her performance." (Official White House Photo by Pete Souza)

As I think about what Aretha Franklin means to the world I think about the essence of soul singing. A common definition of “soul” highlights its connection to gospel music, to rhythm and blues, and to some degree, rock and roll; soul also is the fully surrendered embrace of the spirit, awash with unbridled emotion. If you think of “soul” that way, you begin to understand why people called Aretha Franklin, The Queen of Soul.

Franklin’s legacy is not limited to her command of a musical genre or her popularity at any given time. Her voice put people in touch with something bigger, connecting them to their own emotions and to feelings often ignored. The precision with which she conveyed the emotional power at the heart of any song was, quite simply, a work of art.

The way she used her voice always made us feel, no matter what the song. If the soul of music rests in its ability to help us get to know our authentic selves and transcend to new heights, it was Aretha Franklin, the Queen of Soul, who taught us how to listen – and to make ourselves whole again.