From Pig to Pan: Yamanashi-Iowa Connection Lives on through Baconfest

On a rainy Saturday in late September, thousands of people descended on a plaza near Kofu Station in Yamanashi for the Japan Bacon Festival, a celebration of one of the world’s simplest, yet most delicious and comforting foods.

There were contests that brought a touch of zaniness to the two-day festival. Bacon Queen contestants had to answer questions to demonstrate their love of pork belly, and in a bacon eating competition, the gladiators chowed down heaping plates of pork.

But throughout each day, the crowd’s main pleasure was to savor crispy American-style bacon and its succulent Japanese cousin in a variety of styles: grilled, fried, in sandwiches, paella and soup, on pizza, and more, sold from about 30 tents lining the square, where the sound of rain tapping on canvas merged with the sizzle of cooking meat. 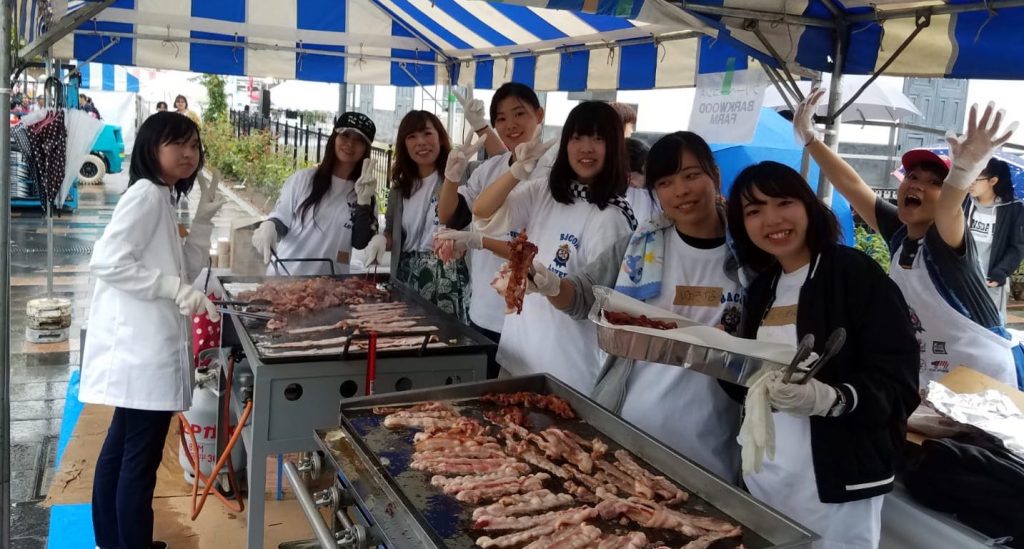 A volunteer team fries up pan after pan of delicious, crispy bacon to hand out to visitors.

This was the second year for the Japan Bacon Festival to be held in Kofu. Its humble roots, however, are in Iowa, one of Yamanashi’s sister states, where a group of young guys on a weekend vacation in 2001 marveled at the deliciousness of bacon as they fried up pan after pan.

What makes bacon special “is the overall cure,” according to Marshall Porter, one of those original bacon aficionados. “In American-style bacon, we’re usually using something sweet – brown sugar, maple syrup. That makes a difference in the cure of the [pork] belly. So you have those sugars. We also add a layer of smoke, [which] brings out the flavors of the sugars and caramelizes with the fat that melts down the sugar when you cook it. That’s where you get that crispiness, from the sugar.”

After years of continuing the vacation tradition with bacon as a key ingredient, in 2008 Porter and his friends organized the first public Blue Ribbon Bacon Festival in Des Moines, the Iowa capital, in honor of their favorite food. Porter holds the title of chief bacon officer in the group.

As one might imagine, a bacon party originally organized by eight guys at a lake house could get kind of raucous. The Des Moines festival, now held in a convention center, features pro-style wrestling, a mechanical bull, laser tag, a DJ dance party, food supplied by dozens of restaurants, lots of beer, and more than 15,000 people. 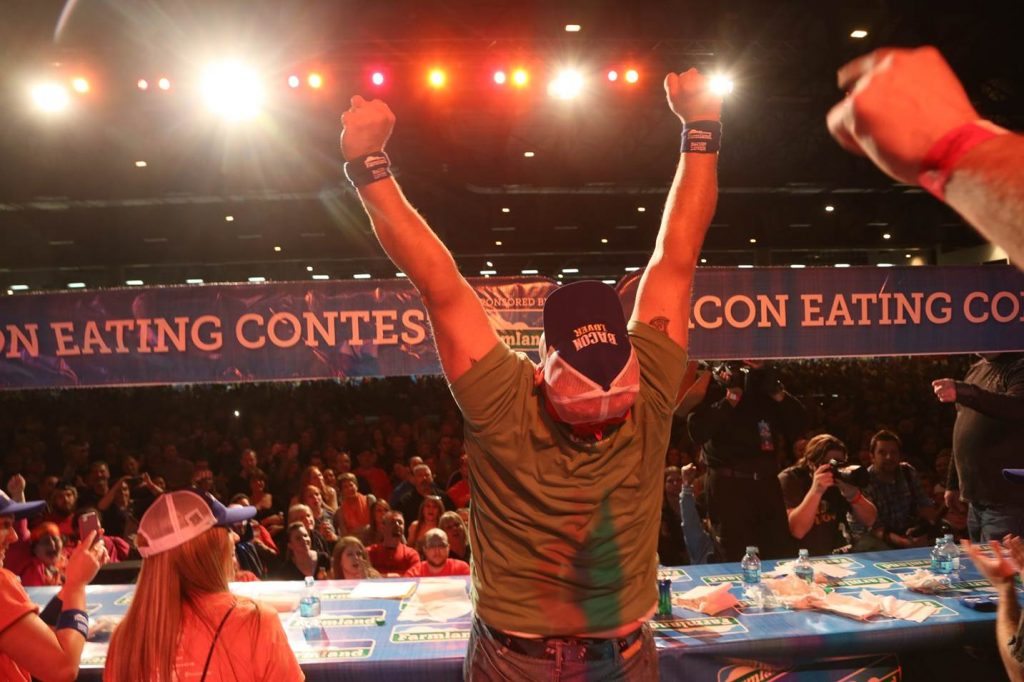 “In the U.S., it’s a little more out-of-control, crazy,” Porter said. “There’s something unbelievable around every corner, but it’s more of an adult-style event.”

The Iowa Bacon Board looked to take what they call “bacon fellowship” to other cities:  Keystone, Colorado, and Reykjavik, Iceland. Three years later, members of the Kofu chapter of Junior Chamber International (JCIK), after participating in young professional exchanges in Iowa, began thinking about hosting their own bacon festival, the first in Asia. In 2017, after presenting Yamanashi wine and other products at a booth at the Blue Ribbon Bacon Festival, and with the support of the Iowa Bacon Board, they organized the first Japan Bacon Festival.

The relationship between Yamanashi and Iowa goes back to 1958, when Kofu and Des Moines became sister cities. The next year, two typhoons struck Yamanashi, leaving more than 100 dead and missing, destroying about 1,700 homes and damaging schools and roads. Agriculture was hit especially hard.

Air Force Master Sgt. Richard Thomas, an Iowa native who was stationed in Japan, organized a military airlift of 36 breeding pigs (one died en route) and 100,000 bushels of corn to help in Yamanashi’s recovery. That original cohort of pigs were bred with Japanese pigs, helping to restore pig farming in the prefecture. Now, six decades later, the meat of their Yamanashi descendants is sold under the Koshu Fujisakura brand. 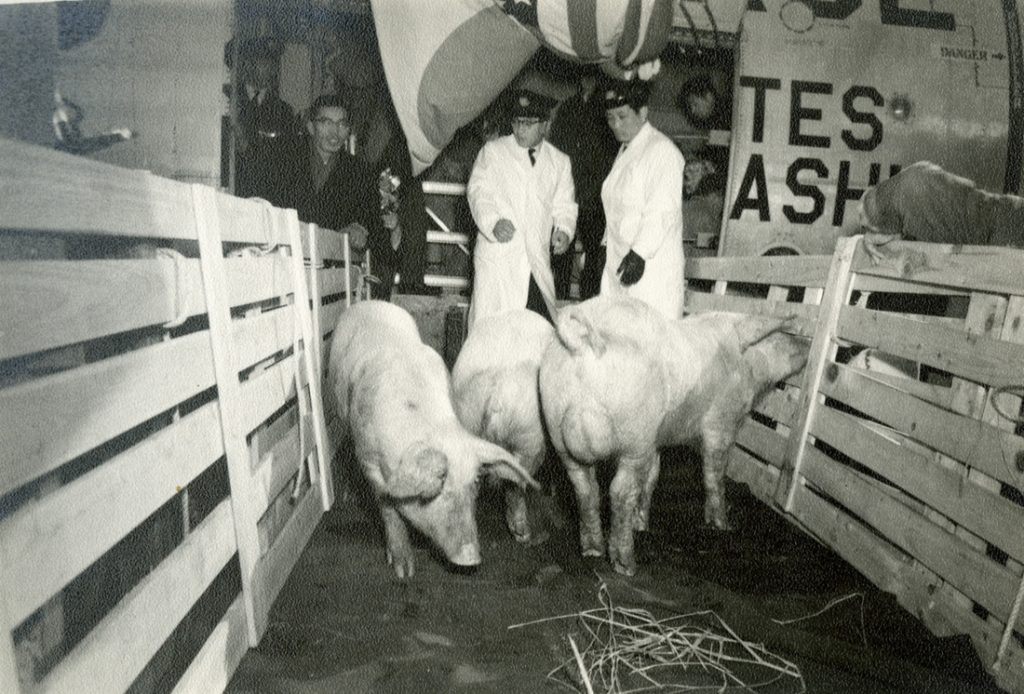 That year, Yamanashi became the first prefecture to join with an American state as sister states; in 1962, Yamanashi Governor Hisashi  Amano brought a bell of peace and friendship and a pavilion in which to hang it, which were placed in front of the Iowa Capitol.

Since then, farm, business, and educational exchanges have taken place in both directions. Each year, several students from Yamanashi win scholarships to study at Iowa colleges and universities; others do job shadowing at Iowa companies while staying with local families, and high school students participate in shorter visits, according to Kassi Wheeler, international program manager for Iowa Sister States.

Sisterly help during hard times has remained a part of the relationship. In 1993, when several Midwest states endured severe flooding, Yamanashi sent $300,000 to Iowa to help with the state’s recovery.

Now, when members of JCIK visit Iowa and American delegations visit Yamanashi, the participants stay in local homes, “so it’s like we have second families,” said Kazuhiro Saito, executive director of the Japan Bacon Festival Executive Committee and JCIK vice president. “This enriches our point of view, so we have a personal connection.”

Saito estimated that this year’s Japan Bacon Festival had about 25,000 visitors over the two days. Sunny weather on Sunday may have helped, even though the event ended early because tents had to come down to prepare for an approaching typhoon. 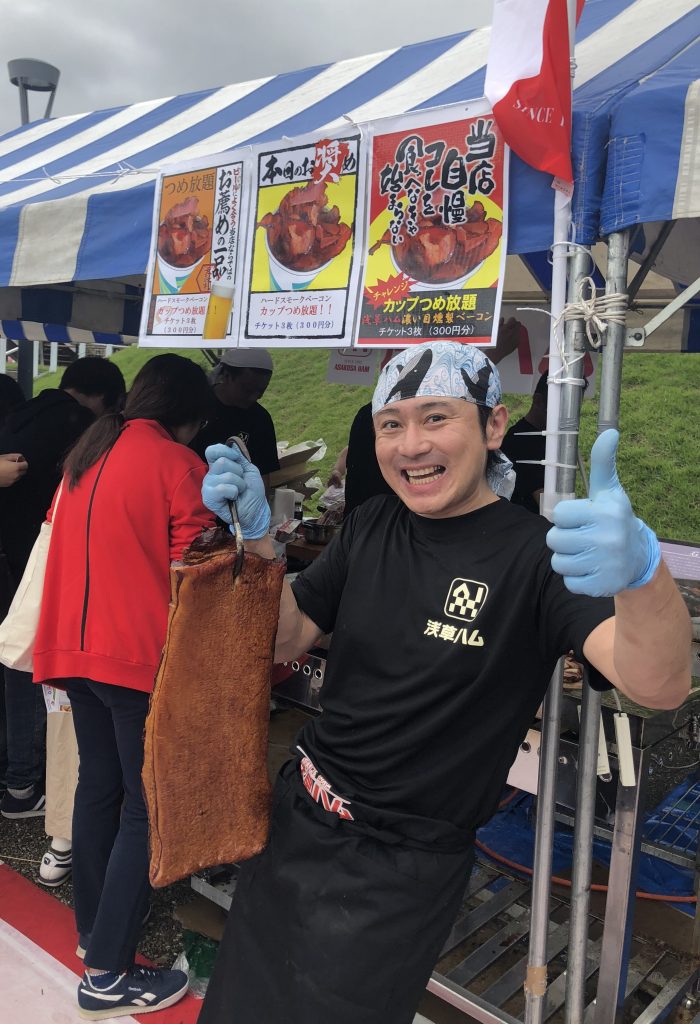 “I believe many people enjoyed the event,” Saito said. “One of our primary purposes for the festival is to make more people aware of the Yamanashi-Iowa connection. I hope the festival will contribute to improving mutual relations further.”

He said that he plans to visit the Des Moines fair in February, and “our goal is to keep going,” so organizers are planning a third bacon festival in Yamanashi next year.

For a few years in the early 2010s, bacon was a fad in the U.S., appearing in internet memes, on T-shirts, in the routine of a famous comedian, and in products such as gum, ice cream, even lip balm. Porter said that the fad may have faded, but bacon is here to stay, and the International Bacon Board is not slowing down in spreading bacon fellowship to foodies around the world.

“The mania died down a little,” he said. “But I don’t think that people’s love of bacon has.”