The People’s Republic of China claims neutrality on Russia’s war against Ukraine. Yet, according to the State Department’s Global Engagement Center, PRC and Chinese Communist Party officials and state-run media repeat Kremlin disinformation about Russian President Vladimir Putin’s war against Ukraine and the atrocities committed by Russia’s forces.

On February 4, 20 days before Putin’s war began, PRC President Xi Jinping and Putin declared the friendship between their countries to have “no limits” even as Russia’s military was amassing more than 100,000 troops along Ukraine’s border.

After Russia’s February 24 onslaught, the PRC echoed the Kremlin’s deceptive description of its unjust war against Ukraine as “a special military operation,” according to Reporters Without Borders, a press freedom advocacy group based in France.

“The Russian disinformation about Ukraine has already reached intolerable heights and the last thing the world needs is the amplification of these lies through China’s propaganda machine,” Reporters Without Borders’ Cédric Alviani said. He added that audiences should “disregard reports by media outlets controlled by authoritarian regimes.”

Bret Schafer, of the German Marshall Fund’s Alliance for Democracy, told The Washington Post that the PRC’s amplification of the Kremlin’s propaganda effectively allows the Russian government to bypass tech companies’ limits on Kremlin-controlled media outlets imposed in response to Russia’s aggression.

Soon after Russia’s all-out invasion of Ukraine, Liu Xiaoming, a PRC official and former ambassador to the United Kingdom, disingenuously tweeted that the PRC supports the “sovereignty and territorial integrity of all countries.”

Yet the PRC’s Ministry of Foreign Affairs continued to echo the Kremlin’s efforts to shift blame for Putin’s war against sovereign Ukraine. “NATO should reflect on what role it has played in the European security issue and the Ukraine crisis,” the ministry said in April 1 tweet. 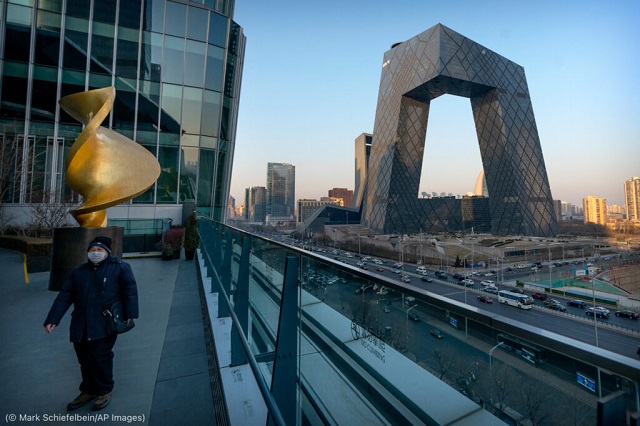 CGTN, the overseas arm of the People’s Republic of China’s state-run TV network CCTV, headquartered in the building on the right, amplifies Kremlin disinformation on Ukraine. (© Mark Schiefelbein/AP Images)

The withdrawal of Russia’s forces from the Kyiv suburb of Bucha in late March revealed hundreds of bodies lying in the streets and mass graves. The PRC and CCP state-sponsored media outlet CGTN tweeted the Kremlin’s false claim that the bodies “had been ‘ordered’ by the U.S. as part of a plot to blame Russia.”

PRC Foreign Ministry Spokesperson Zhao Lijian repeated the false claim, debunked by independent researchers, that the United States maintains biological weapons laboratories in Ukraine. It was part of a disinformation campaign that targeted audiences around the world in multiple languages.

PRC officials use Twitter to spread disinformation abroad even as they block people in their own country from accessing that platform.

It is unclear, though, who is listening to this disinformation. Maria Repnikova, a professor of global communications with expertise in PRC media at Georgia State University, said at a State Department briefing that many people in the Global South and West don’t trust the PRC’s diplomats or state-run media.