The U.S. Department of State is transforming its diplomatic efforts to better address cybersecurity, climate change and other challenges of the 21st century, Secretary of State Antony Blinken said October 27.

“We have a window before us to make historic, lasting change, and we’re determined to seize it,” Blinken said as he unveiled a modernization plan for the State Department.

The plan focuses on enhancing the department’s expertise and performance in five areas critical to U.S. national security:

Blinken laid out the plan at the Foreign Service Institute in Arlington, Virginia, where diplomats and other State Department employees receive training.

Blinken said he intends, with the support of Congress, to create a new bureau for cyberspace and digital policy headed by an ambassador-at-large.

“We want to prevent cyber attacks that put our people, our networks, companies and critical infrastructure at risk,” he said. “We want the internet to remain as a transformative force for learning, for connection for economic growth and not a tool of repression.”

He emphasized that the United States is the most technologically advanced country on Earth. “The State Department should be empowered by that strength.” 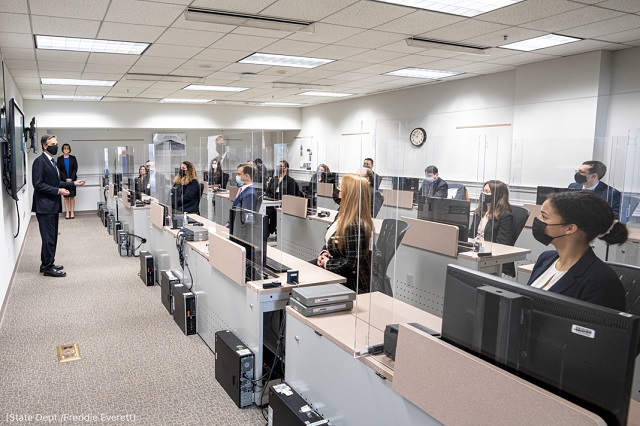 Secretary Blinken meets with personnel and students at the Foreign Service Institute in Arlington, Virginia, on October 27. (State Dept./Freddie Everett)

“We want to make sure the technology works for democracy by fighting back against disinformation, standing up for internet freedom and reducing the misuse of surveillance technology,” Blinken said.

On climate, he noted that the administration has created new positions dedicated full time to climate issues, one in every regional bureau and in critical posts overseas such as in India and Brazil.

As the world recovers from COVID-19, Blinken said the United States is determining how best to lead and partner with allies to prevent, detect and respond to future global health security threats.

Blinken reiterated that the United States will cooperate with other countries to tackle mutual challenges to the global economy, internet policy, environmental protection and human rights.

“If we’re not engaged in international institutions, then we leave leave a void likely to be filled by others who do not share our values and interests,” he said. “Or no one steps up, and we squander the benefits of collective action.”