American college culture is home to many traditions, but perhaps one of the most unique aspects of university living in the United States is Greek life.

The term “Greek life” was coined because of the distinct names sororities and fraternities have, which are derived from the Greek alphabet. Their names typically consist of a sequence of two or three Greek letters. For example, the name of Sigma Chi, one of the largest social fraternities in the nation, contains the Greek letters Sigma and Chi. Other popular sorority and fraternity names include Chi Omega, Kappa Alpha Theta, and Sigma Alpha Epsilon.

Esther Ahn is a UCLA student who is part of both a social sorority and community service fraternity.

“I can definitely say that my sorority and fraternity have given me a social circle and networking so I never feel lonely,” said Ahn. “These people make me want to become the best version of myself, and it’s really safe to say that I’ve found some of my best friends here and a home away from home.”

With the many opportunities that fraternity and sorority life offer, it is no surprise that the process of joining such an organization can be complex and competitive. Colleges often have a large selection of Greek organizations, and many students start their Greek life journey by first deciding which one piques their interest.

In Greek life, the term “rushing” refers to the period of time where students explore different sororities and fraternities and see which one fits them best. However, not every student can get into their top pick. Rushing a sorority or fraternity is often very competitive, and selectivity can be based on anything from how sociable a person is to how academically inclined they are.

After the rush process, students are “initiated” into their fraternity or sorority, sometimes in a secret ceremony where initiates learn things unique to the organization, like a handshake, motto, or ritual. This initiation process differs depending on the organization but typically signifies a student becoming an official member of their respective sorority or fraternity.

Upon being initiated, students are exposed to a myriad of social connections and events that cater to the goals of that sorority or fraternity. For example, if a student is joining a social sorority, it is not uncommon to partake in multiple parties and social gatherings to strengthen the ties of their community. 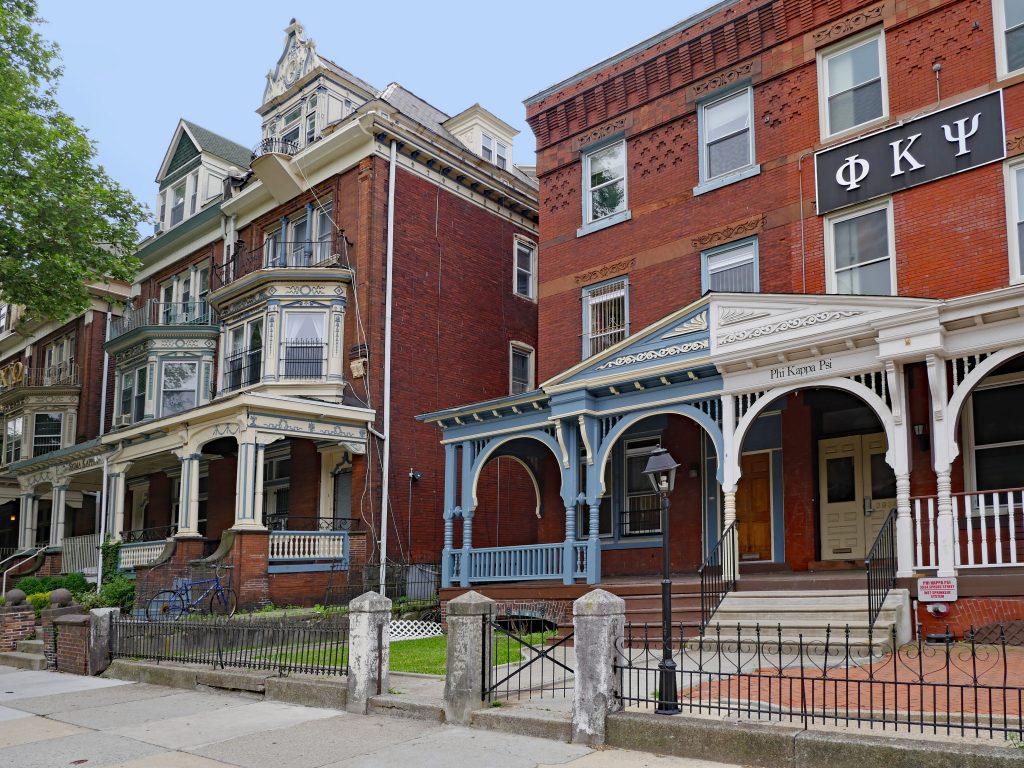 The residential area around the University of Pennsylvania has many large old houses with porches used as fraternity and sorority houses. (Spiroview Inc./Shutterstock.com)

Many sororities and fraternities also offer a “big” and “little” program where an established member, such as a “big sister” in a sorority, acts as a mentor to a newer member, e.g., the “little sister.” This tradition establishes tighter bonds within the organization and builds friendships that can go beyond the sorority or fraternity.

The bonds of a Greek organization are not limited to the active members within their community. In fact, one aspect of Greek life that makes joining a fraternity or sorority so enticing is the exposure to a network of their Greek organization’s alumni. Alumni are previous members of sororities or fraternities who have graduated from university. Through the alumni networks , members can often have the benefits of post-graduate mentorship along with prioritization or exposure to internships and job offerings that might not have otherwise been open to them.

“I really like Greek life because it’s definitely given me such an amazing support system as well as unique opportunities to meet alumni and students involved in Greek life from other campuses,” said Ahn. “It’s such a supportive and friendly community because everyone wants to get to know you and connect with you, share their passions and interests with you, and support you.”

Banner image: Sorority houses at the University of Louisville in Louisville, Kentucky. (4kclips/Shutterstock.com)