American Colleges Get in the Game with Varsity Esports

Two teams enter the arena, each ready to take down its opponent while destroying and plundering for gold and riches. Stray from the plan, and the round could be over in seconds. The penalty? Death, or at least depleted health and a fortune lost. But success in this virtual world leads to glory in the real one – and a victory for one’s school.

That’s because esports, with organized teams, leagues, and tournaments, has been booming globally, and American universities have caught on, establishing their own varsity esports teams, organizing competitive gaming tournaments, and offering scholarships to top players. Since Robert Morris University, in Chicago, established the first varsity esports college team in 2014, the sport has exploded to more than 130 collegiate varsity teams across the country with more than 3,000 student-athletes. 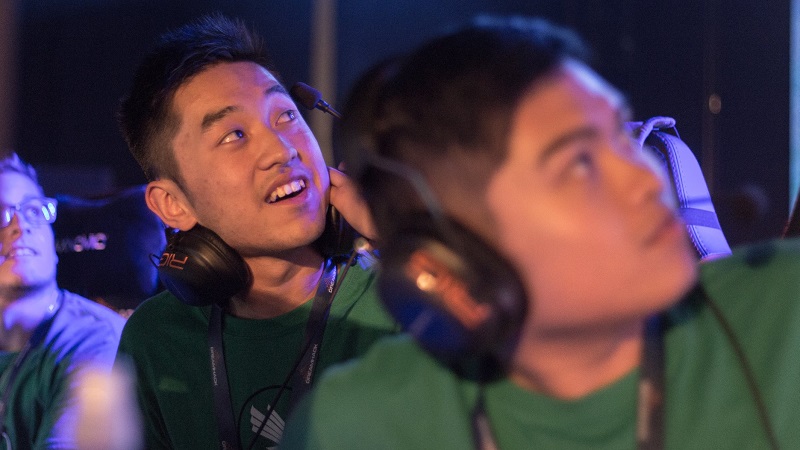 Players watch the replay of a final team fight during the American Video Game League (AVGL) DreamHack Austin Stage, a tournament in which players bring their own computers and connect to a local area network in a hall full of gamers. (Photo courtesy of AVGL)

“I think it’s great. I get to be part of something that is so fast-growing here,” said Carlos Garcia an Overwatch player on the University of North Texas’s esports team. “I love the community.”

The overall popularity of esports is boosted by the organization of international game leagues, such as the Overwatch League, and individual prizes at professional tournaments that have reached as high as $3 million (at the Fortnight World Cup, held in July at Arthur Ashe Stadium, home of the U.S. Open). At the university level, the National Association of Collegiate Esports (NACE) is one of a few nonprofit supervising bodies that awards scholarships, gives resources to coaches and athletes, and coordinates events between its member varsity university teams as the NCAA does for major college sports.,

On college campuses across the U.S., esports enthusiasts gather in dorm rooms, computer labs, and other venues to compete against one another. They play games like League of Legends and Overwatch, which feature heroes in magical or otherworldly realms, each character equipped with different weapons and abilities. Varsity programs take this passion to another level, allowing players to receive full-time support and dedicated spaces on campus to practice and compete for scholarships and the glory of winning.

The University of North Texas (UNT) officially launched its esports program in four games in fall 2018 and now has 31 athletes. After a year of successful recruitment and programming for the varsity team, the university announced that it will provide $20,000 in scholarships to be divided among eligible students who excel at the sport. This journey to sponsored competitive gaming is not without its challenges. Past qualifications have seen an estimated 50-60 students try out for 7 or 8 positions as players, coaches or analysts in each of the four games. Garcia said the Overwatch tryouts were “nerve-wracking.” But then, he added, “you build a sense of trust and synergy with your team of six people against another team of six. You must work together with your team to capture and control objectives on different maps by using abilities.” 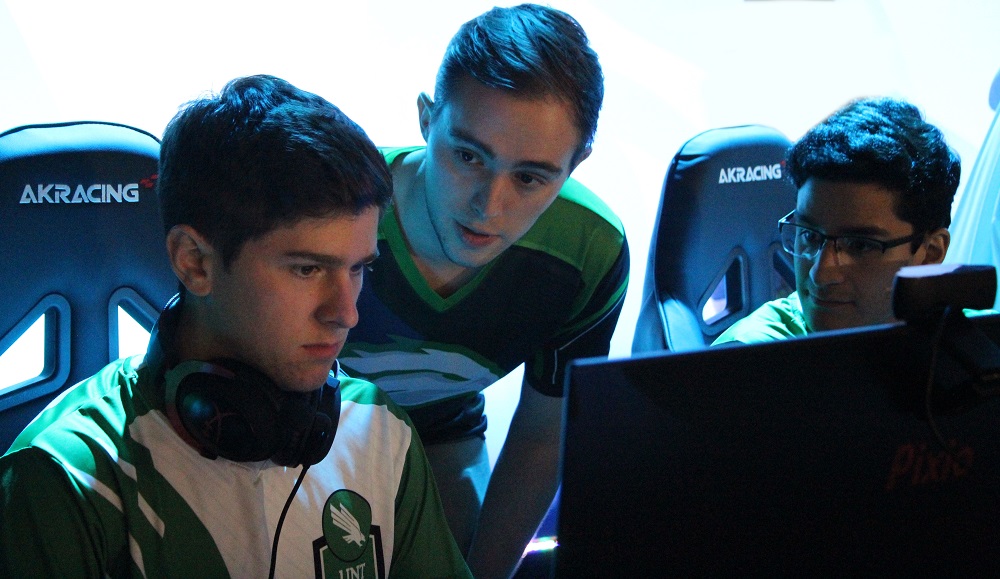 Coach Nick Cotton advises a player between sets of Overwatch at OP Live in Dallas before the players move on to the next map. (Photo courtesy of Richard Fernandez)

For example, League of Legends and Overwatch both rely on coordinated teams. Each character needs to accomplish an objective to contribute to the team’s victory. They enter blindly onto their competition field—a map that is obscured until an expeditionary force called the “jungler” opens up the team’s view of the map and makes strategic plays. A supporting character provides healing and resources to teammates. For League of Legends, there is also a “farmer” who kills enemy monsters and takes their gold to supply the “attack damage carry.” Garcia said the Overwatch tryouts were “nerve-wracking.” But then, he added, “you build a sense of trust and synergy with your team of six people against another team of six. You must work together with your team to capture and control objectives on different maps by using abilities.”

College esports teams specialize in different video games with guides, like assistant coaches, who focus on developing players’ gaming skills, and a data analyst to assess team win-loss rates and evaluate and plan team strategy, depending on what map or character the challenge involves. Instead of training in a weight room or on a court or field, the teams perfect their skills on gaming PCs and in designated spaces with multiple consoles. 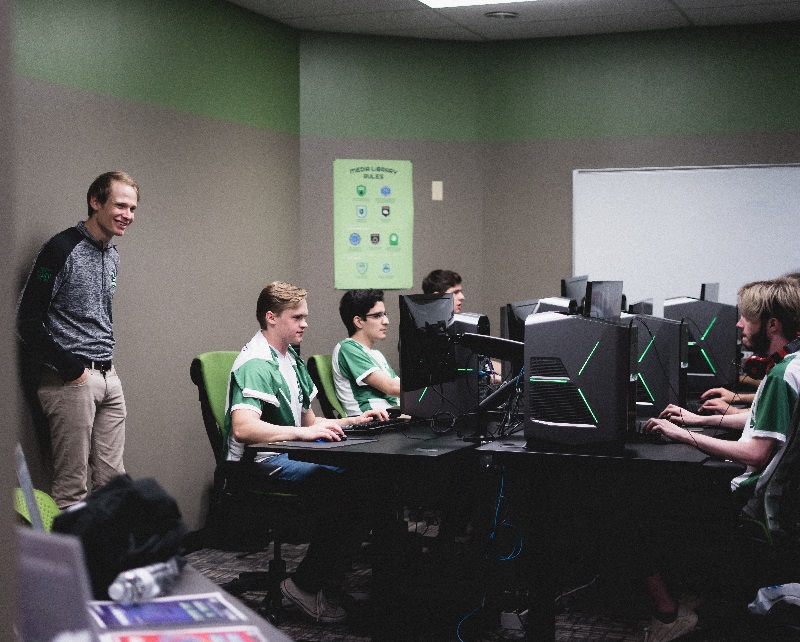 UNT esports coordinator Dylan Wray explained that the athletes practice together by watching footage from recent games, reviewing their thinking processes and discussing how they can improve and create decision-making paths. That is, he said, they “take [the] raw talent of the players and channel it into decision making.”

As a team, Wray explains, players must anticipate scenarios, asking and answering, “When X happens, what do we do?” In esports games like League of Legends, players must “make complicated decisions very quickly because rounds could be over in 5-15 seconds,” Wray said. “Students must go through and craft a communication style to get as much info as possible across to each other.”

Natalie Nguyen, a varsity League of Legends player at UNT, serves as a “damage dealer” for her team, attacking and inflicting as much damage as possible on her opponents’ characters. In League of Legends, rival teams strategize to destroy their enemy’s primary objective. This requires that teams coordinate their characters’ strengths and advance to the next level while guarding their home base. Nguyen and her teammates need to work out how to protect critical characters like hers, which if eliminated, could quickly end the game for the entire team.

The transformative impact of esports is apparent in the stories of the players. Esports was a natural stepping stone for Nguyen, who grew up playing video games with her two brothers. “As I grew older, I got into a more competitive attitude,” she said. “I think if you want to be better at a game you play, you naturally gravitate towards more competitive play.”

The UNT esports team competes throughout the academic year, challenging different universities to weekly online matches and taking to the road for tournaments. During last year’s OP Live event in Dallas, Garcia experienced his most memorable moment yet at the first local-area-network tournament where they were playing in person against other players. “We lost to a university in the group stages and then went undefeated all the way to the end, where we played that same team in the grand finals and won,” he said. “The stage, the lights, and the adrenaline were great.”

From university practice facilities to global arenas, esports is transforming the lives of players and spectators alike. Big national and international events with large prize purses have captured the public’s attention. The competitive spirit and team atmosphere creates great opportunities for students like Nguyen and Garcia to go from personal gaming to team competition, meeting new people in the process. It’s also a way for international students to make friends from other cultures. For students who find happiness surrounded by fellow enthusiasts and virtual athletes who challenge and cheer them on, esports will help them rise above and beyond in navigating college life and advance to the next challenge map.