Hispanic Americans are making a strong contribution to the U.S. military, and their ranks continue to grow.

Several enlisted Hispanic Americans cite a dedication to service and family influence as reasons they chose a military career. The military salutes these Americans during Hispanic Heritage Month, celebrated from September 15 to October 15.

Michele Pearce, whose mother is a native of Puerto Rico, was nominated to be the Army’s general counsel. A lawyer and former Air Force officer, Pearce will become the first Hispanic-American woman to serve in the role if the Senate confirms her nomination.

She has family roots in the military. Her father is a retired Navy chief petty officer who served in Vietnam. 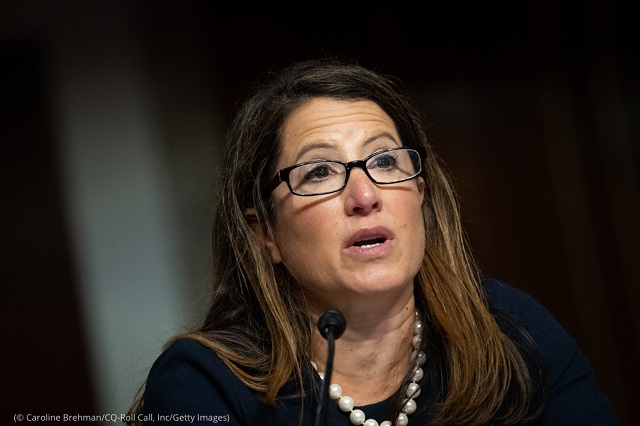 Michele Pearce testifies August 4 at the Senate Armed Services Committee hearing on her nomination to be the general counsel for the U.S. Army. (© Caroline Brehman/CQ-Roll Call, Inc/Getty Images)

“I was so fortunate to have a father and mother who believed in serving our country. The work ethic that I learned from my parents has always served me well,” she said.

Julie Guerra is the sergeant major on the Army’s military intelligence staff and the senior noncommissioned officer of Army intelligence. She learned to set an example for others at a young age, helping her mother care for her four younger siblings in Tucson, Arizona.

She joined the Army to help pay for college tuition. Her father had taken note of her leadership potential when she was just 9.

“He saw that I had the discipline and the responsibility to be the one that he could put in charge, and he entrusted me with a lot of things because of that,” Guerra said.

Soldiers such as Technical Sergeant Alejandra Avila, who is celebrating her ninth year in the Air Force, connect with their heritage daily.

Avila speaks Spanish in her courses at the Inter-American Air Forces Academy, which teaches military members stationed in Central and South America. She was recently promoted to become the executive officer for the academy’s commandant.

A native of Monterrey, Mexico, she moved with her family to the U.S. when she was 10. One of her biggest adjustments was learning English. She joined the Air Force after graduation and moved up the ranks quickly.

“Now I’m the executive at the academy,” she said. “There has not been a time in my career where I am not learning something new.”