Although Kitami, Hokkaido, and Elizabeth, New Jersey, have been sister cities for about 50 years, their ties go back to the early 1900s when two American missionaries settled in the town.

The missionary work of George and Ida Pierson provided a spiritual and moral foundation for the pioneers who developed Kitami right after the area was opened up to development. George Peck Pierson was born in Elizabeth, New Jersey, then a riverside town near New York, and came to Japan as a missionary in 1888. In 1894, he moved to Hokkaido, where he preached to the pioneers who were developing the island.

George married Ida Goepp in 1895. Together they settled in Kitami in 1914 after deciding to make it their last mission headquarters in Hokkaido. Their decision was inspired by the fact that Kitami had a settlement of Hokkosha Christian pioneers who had moved north from Kochi, in Shikoku. The pioneer group was led by a Japanese minister named Sakamoto Naohiro, who was the nephew of Sakamoto Ryoma, a prominent figure in the movement to overthrow the Tokugawa shogunate. 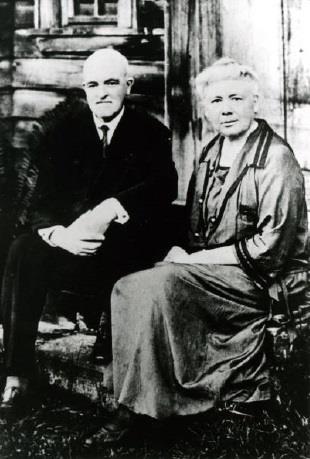 Atop a small hill covered with elm and oak trees, the Piersons built a two-story, Swiss chalet–style wooden house, designed by William Merrell Vories, a leading architect of Western-style buildings in that day. Kitami City renovated the home in 1970 and opened it to the public as a museum called the “Pierson Memorial House” the following year. The street in front of the house was named “Pierson Avenue” and remains a popular spot for the people of Kitami. 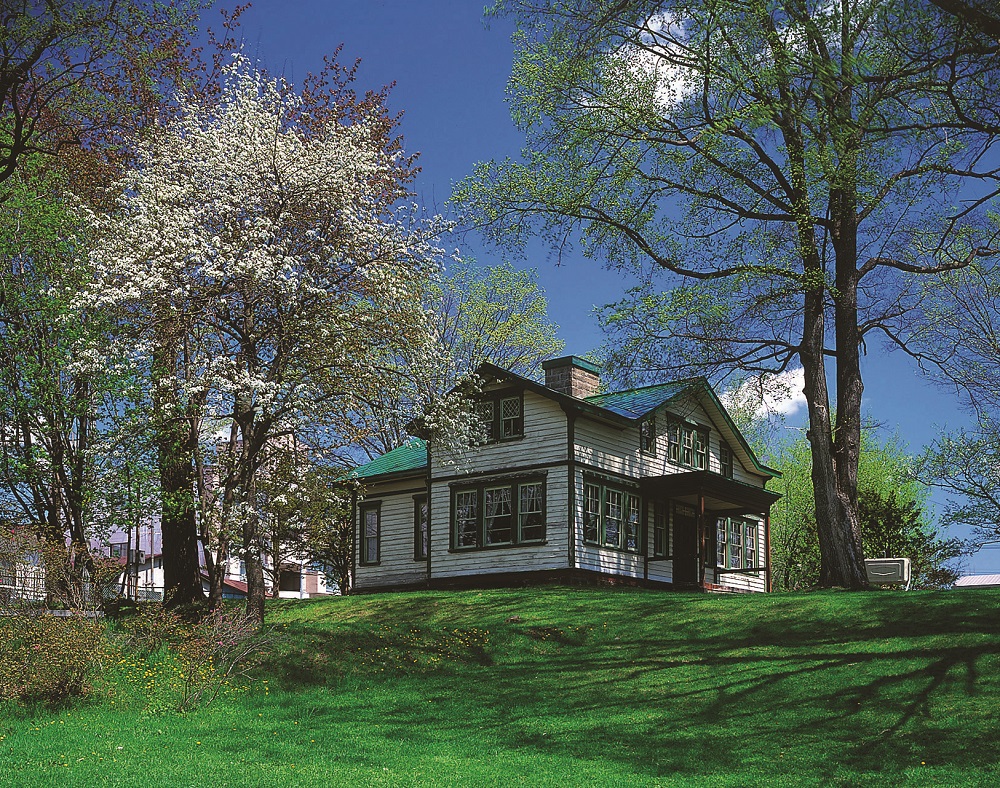 The Piersons were missionaries in Japan for 40 years, about 15 of which were spent in Kitami. Masses of people gathered tearfully at Kitami Station on the day of their departure in 1928 and saw them off by singing hymns. Struggling to say good-bye, Pierson presented them with his telescope, saying, “Use this to see all the way to the United States, where we will be!” The telescope is now on display at Pierson Memorial House.

The Piersons’ adventurous spirit has been passed down through the generations to the people of Kitami today.

Sister-city activities over the years

Kitami has shared historical and spiritual ties with Elizabeth since the time the Piersons settled there. On June 12, 1969, they became sister-cities to deepen their friendship and mutual understanding.

The two cities immediately started sending delegations back and forth and have continued to do so ever since. The Kitami Symphonic Band performed in Elizabeth in 1976, kindergarteners in the two cities have exchanged artwork, and the Kitami City Youth Jet Delegation has been dispatched to Elizabeth five times. 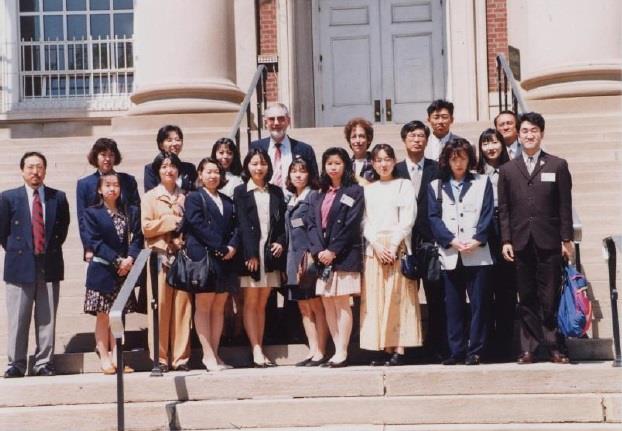 One of the 16 members of the 1996 youth delegation, Kazuo Hata, says the historic Elizabeth city hall building and picturesque streets of the city stand out in his memory. Since then, he has told people in Kitami all about Elizabeth and invited his friends from the New Jersey city to visit Hokkaido. Social media has made it easier for him to stay in touch with them and keep their friendship alive, he says.

“We will continue to promote the attractions of each other’s cities,” Hata says.

Elizabeth City Hall by Wally Gobetz (licensed under CC BY 2.0)

Ayako Tsuji visited Elizabeth in 2012 and 2014 and held cooking classes there both times. During her second visit, marking the 45th sister-city anniversary , she taught culinary arts students at a local vocational high school how to make Japanese dishes like sushi, kInpira gobo (braised carrot and burdock root), and an original dessert made with eggplant.

“We had a wonderful time together!” Tsuji says.

As a “vegetable sommelier,” she explains, “I’m hoping to introduce the people of Elizabeth to Japanese home cooking and some of my original recipes.” In the process, she may lay the groundwork for young people from Elizabeth to work in food-related sectors in Kitami. She also looks forward to teaching more cooking classes. 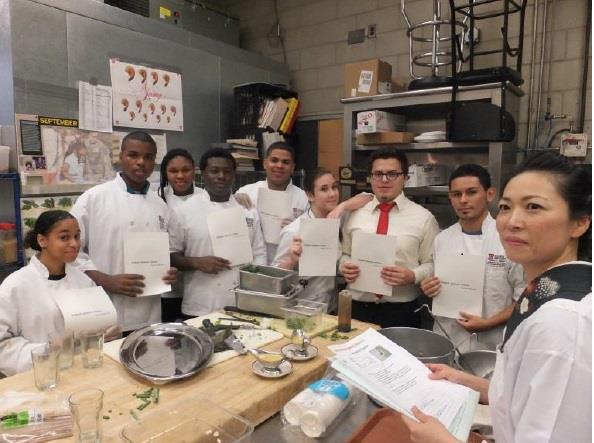 Ayako Tsuji (far right, foreground) leads a Japanese cooking class at a high school in Elizabeth in 2014 to mark the 45th anniversary of the sister-city ties.

Events to mark the 50th anniversary

Some 91 years have passed since the Piersons returned to America, and Kitami and Elizabeth have developed dramatically over that time. This year, the two sister cities are celebrating their 50th anniversary.

City government officials and representatives of economic and educational institutions are planning reciprocal visits. On the citizen level, Kitami is organizing arts and cultural exchanges, a Pierson Memorial House Green Concert in Kitami, and Japanese cooking and origami classes in Elizabeth. Kindergarteners will trade artwork, and junior and senior high school and university students will participate in web conferences. The city administrations and citizens will organize commemorative events. Exchanges between Kitami and Elizabeth hospitals and universities are also in the works. By continuing to hold friendly exchanges with Elizabeth, Kitami aims to develop international awareness among its young people, who will lead the city into the future, and to reflect on the outstanding contributions of the Piersons. 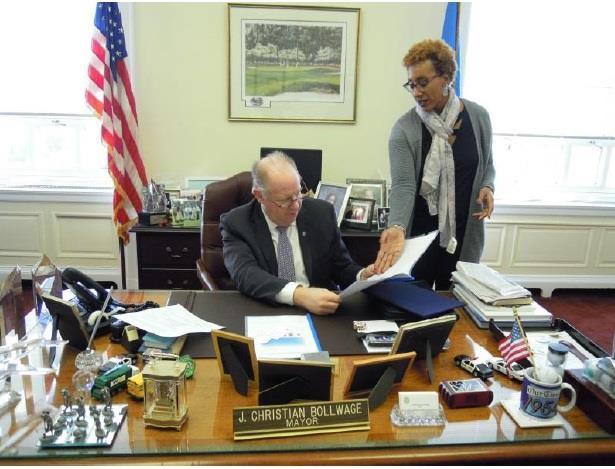 “Our partnership with Kitami has been a great opportunity for both Kitami and Elizabeth citizens to foster relationships and broaden our horizons with different cultural experiences that can help strengthen our community,” according to Elizabeth Mayor J. Christian Bollwage. Elizabeth’s Health Department Director Krishna H. Garlic says, “I am so honored to have the responsibility of coordinating our sister city visits. And this year is especially important as we celebrate 50 years of partnership between Kitami and Elizabeth. I look forward to the exciting celebrations planned in both cities to commemorate the occasion!”

This article was contributed by Kitami City Hall.