Learning to See Beyond What Meets the Eyes: My American Experience

The morning of August 20, 2007 is as clear in my memory as if it were yesterday. I stood at the airport in Ulaanbaatar, equal degrees excited and nervous, surrounded by my family as I prepared to cross the globe to a country I only knew about from movies and books. As surreal as it seemed, I knew that this was a shining moment of triumph, the proof of my competence. It was the moment I had been working toward and that many, myself included, doubted would ever come. I was about to travel to America as the first-ever blind Fulbright scholar from Mongolia.

When I was 14, an American woman named Martha came to my school and offered to teach English to interested students. What struck me and my classmates most was that she was blind, just like us. She lived alone, walked with a cane, and spoke little Mongolian. I’m still amazed by how courageous she was to travel alone in the late 1990s to Mongolia, a place where people drove without looking, homeless people lived inside uncovered manholes, and pickpocketing and poverty were rampant. She lit the first spark of confidence in me and showed me that I, too, might be brave enough to travel somewhere far away and become independent someday.

Martha’s English class started out with many students, but many of them dropped out in the first two weeks. Eventually I was the only student she had left, but she continued to teach me for two years. I went from knowing zero English to being able to converse freely about my hopes and dreams in the language. Martha showed me what was possible and helped me believe in my own potential. With that I was halfway there.

The Fulbright program allowed me to see the world and changed the course of my life. It freed me both in the physical and the intellectual sense. Until I traveled to America, I had never gone anywhere by myself. At the time, Mongolia lacked the expertise and equipment for teaching mobility independence to blind people. I had never learned to walk with a cane, so I always had to be accompanied by a family member or a friend. Do you know what a privilege it is to be able to walk alone with your thoughts, stopping whenever or wherever you want, taking as long as you want to get where you’re going? That’s what America gave me. Until I went to America, I’d never even owned a key to my apartment because I couldn’t go anywhere on my own. As I learned to walk with a cane in America, I quickly became an explorer, a wanderer, and a killer of shoes. After I completed my cane training, I quickly moved on to guide-dog training and received my first guide dog in August 2008.

I was never defined by my disability, even before I went to America. But I was defiant, always trying to prove myself. What America taught me was that I was already an acknowledged human being who had the same right to contribute to society as everyone else. Now I could focus on my studies just like any other student. As far as my professors were concerned, the only difference between me and the other students was that I had a pretty dog. There were difficult days, of course, especially in the beginning. Days when I wondered why I’d left the comfort of my home, family, and friends. I felt lonely, homesick, and frustrated. But remembering how hard I had worked and what I hoped to achieve propelled me forward.

When discussing what people with disabilities can do, the phrase “let’s be realistic” often comes up. But being realistic is impossible since everyone’s reality is different. When I first arrived in America to pursue my Master’s degree, I didn’t know how to use a computer, had never traveled anywhere on my own, and didn’t know how to use a cane or a guide dog. It probably didn’t seem realistic for me to go from not being able to check my email to becoming proficient in using screen-reading software, or to go from  being completely reliant on someone else to get to the restroom to navigating a campus of 30,000 on my own. But I did those things. Why? Not because I’m superhuman, but because working twice as hard with ten times less resources was my reality.

I taught myself English when I had no paper to write on and no books that I was able to read. I taught my younger sister the English alphabet so she could spell out words to me one letter at a time. That was my reality at the age of 14. So for me, it was realistic to believe that I would be able to learn how to use a computer and cane and maintain a full course load when I was 24. When people try to be “realistic” about what members of a marginalized group are capable of, they often forget about the immense power of curiosity and thirst for knowledge, along with the desire to be relevant, to contribute, and to be acknowledged. 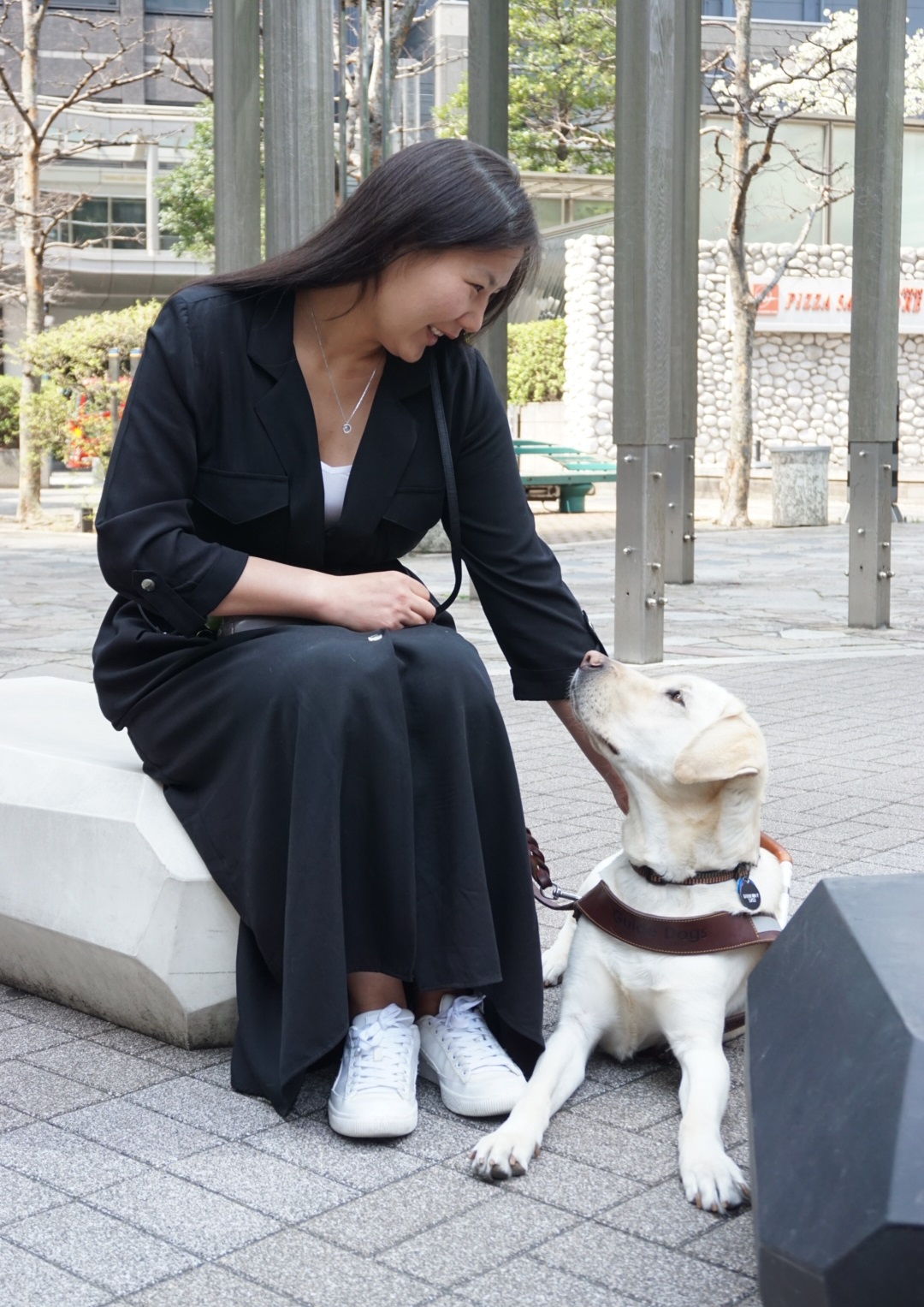 Uyanga and her current guide dog Dunaway enjoying a beautiful spring day in Tokyo in April 2019.

Many people with disabilities have had to prove themselves time and time again to get any type of recognition and value. People often assume incompetence, and it’s on the person with a disability to prove them wrong. To have to do that with nearly everyone you meet is exhausting. My advice to anyone working or interacting with a person with a disability is to always assume competence, be willing to give trust and confidence without proof, and be willing to be the ally and not the judge. Don’t expect less from us than our non-disabled peers. And when people tell us to be realistic, I tell them to believe in us. Overestimating our potential—dreaming—is how we advance.

Before I went to America, I often adjusted my life and my dreams to accommodate my disability. But after America, I let my disability take a back seat. I learned that there is much more to life than what meets the eyes, and there are endless opportunities if I only allow myself to find them.

Uyanga Erdenebold is a public relations and diplomacy professional with over nine years' experience working for the U.S. Department of State and  NGOs. Uyanga has traveled extensively with her guide dogs and works to promote social awareness for disability rights and accessibility everywhere she goes. An avid dog lover, Uyanga is one of the founding board members of Lucky Paws, the first animal rescue/advocacy group in Mongolia. Most recently, Uyanga worked as the Program Manager for the Tomodachi MetLife Women’s Leadership Program at the U.S. Japan Council in Tokyo Japan. She currently serves as an executive board member for the Council on Diversity and Inclusion at the U.S. Embassy in Tokyo.

Banner image: Uyanga and Gladys in May 2009. Uyanga became the first ever Mongolian to receive a graduate degree from her program at Louisiana State University.