The people of Ukraine are fighting to maintain their daily routine despite Russia’s brutal attempts to deny Ukraine’s sovereignty and suppress their identity and culture.

Russia’s “annexation playbook” seeks to undermine all aspects of civilian life in Ukraine.

As it did in 2014 in Crimea, Russia implemented tighter controls when it staged sham referenda in four of Ukraine’s regions in September. The Kremlin used the bogus results to attempt to annex Donetsk, Kherson, Luhansk and Zaporizhzhya regions. On October 12, the United Nations General Assembly overwhelmingly condemned Russia’s attempted annexation and declared it illegal and without effect.

Leading up to the sham referendums, the Kremlin stepped up false claims those territories were already “part of Russia” and introduced severe measures that affected schools, employment and family life. Similar measures were implemented in other areas of Ukraine that Russia’s forces control — or temporarily controlled until Ukraine’s forces liberated them, such as the city of Kherson in November. 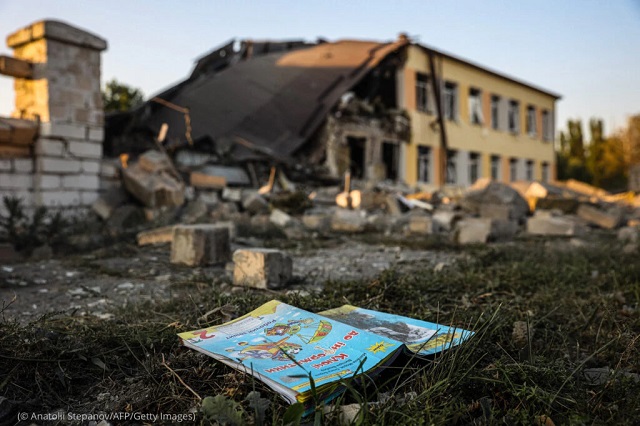 A schoolbook lies near a school destroyed by a missile strike in the Donetsk region August 30. Russia’s invasion displaced 3 million children and caused more than 2 million children to leave Ukraine between February and June, according to UNICEF. (© Anatolii Stepanov/AFP/Getty Images)

Russia calls the school curriculum it is imposing on Ukraine the “Russian World” project. Teachers in parts of Ukraine under Russia’s control who oppose the curriculum face reprisals, including arrest and imprisonment. When some of Ukraine’s teachers resigned in protest, Moscow said it would send teachers from Russia to fill the gap.

Kremlin-installed authorities also have threatened to separate children from families who refuse to enroll their children in schools offering the Russia-imposed curriculum.

These are some other measures intended to replace Ukraine’s educational system in Russia-controlled areas:

In some cases, educating children took a back seat to making school buildings into military facilities. Russia’s soldiers used schools in Izyum to detain and torture civilians until they named individuals in Ukraine’s police and armed forces, according to Human Rights Watch. 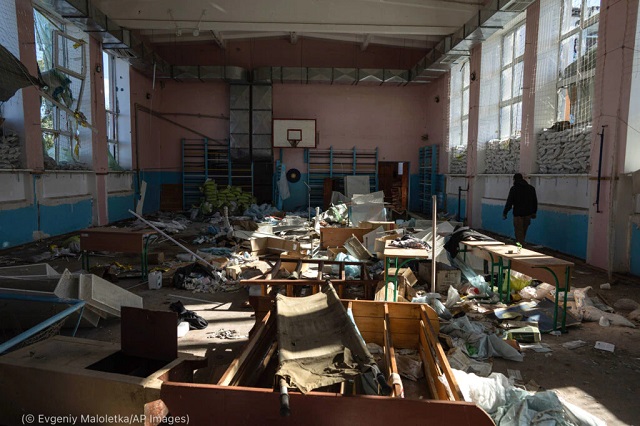 A man walks through a school gym in Izyum, which Russia’s troops used as a military hospital. Journalists reported 10 torture sites in the town and gained access to five, including the school, the Associated Press reported September 21. (© Evgeniy Maloletka/AP Images)

Russia’s attacks have damaged about 40% of Ukraine’s electricity facilities, according to Amnesty International, which called the attacks a war crime.

Many families rely on batteries, generators and solar power to stay connected during power outages, to stay warm and to maintain internet service.

“We fight for our land, for our children, so that our people can live better, but all this comes at a very high price,” a Ukrainian soldier told the Associated Press (AP). 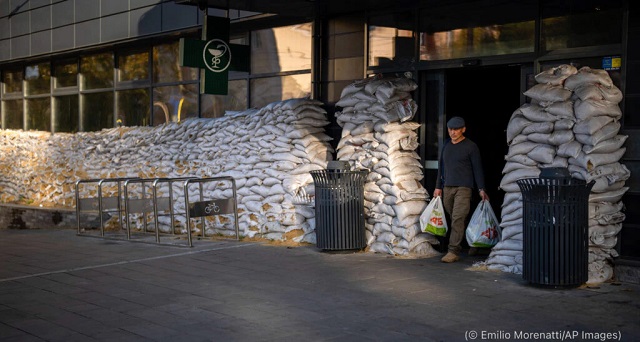 A man carrying shopping bags leaves a supermarket protected by sandbags in the center of Mykolaiv, Ukraine, on October 24. (© Emilio Morenatti/AP Images)

Some families are separated because of strict border controls. As a result of Russia’s filtration operations, there are reports of children being separated from their parents and children forcibly deported to Russia for foster placement or adoption.

“The Russians are trying to install a permanent, official border crossing, and so these are the measures that they are trying to establish,” Oleksii Savytskyi, a Ukrainian official who assists civilians arriving from Russia-held territory to Zaporizhzhya, told the Washington Post.

In Sviatohirsk, which Russia held from June to September, residents could not leave their homes even to bury the dead. Relatives had to bury loved ones in adjacent gardens, according to the Los Angeles Times.

Farmers had to leave their fields when the bombing began and Russia’s soldiers arrived. Mines were scattered on small agricultural parcels. 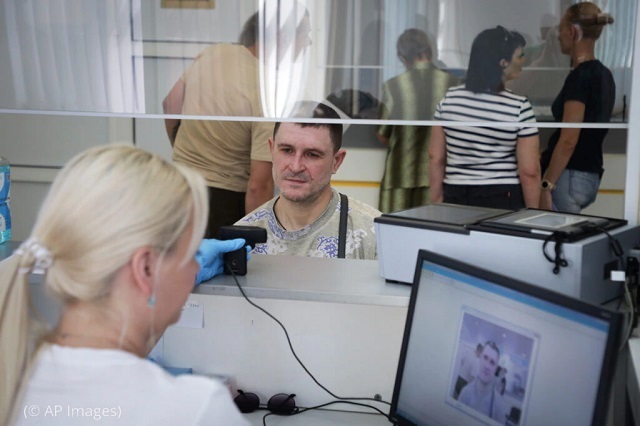 A Donetsk resident receives a Russian Federation passport in a Russia-controlled part of Donetsk in July. (© AP Images)

In places such as Zdvyzhivka, Russia disrupted all civilian activity by taking over the village council building, a church, a kindergarten and an ostrich farm for its military, AP reported. Residents were surrounded by checkpoints.

Witnesses and survivors in Zdvyzhivka — as well as Bucha, Ozera and Babyntsi — told AP and the Public Broadcasting Service’s Frontline documentary series that Russia’s soldiers tortured and killed people on the slightest suspicion they might be helping the Ukrainian military.

The Washington Post reported that following Ukraine’s liberation of the city of Kherson in November, it was apparent that Russia “operated a detention system on a scale not seen in any of the dozens of other cities, towns and villages liberated by Ukrainian forces in recent weeks.”

The U.N. Independent International Commission of Inquiry on Ukraine in October said it found reasonable grounds to conclude that war crimes and other violations of international humanitarian law and human rights abuses have been committed in Ukraine.

While the fighting rages, many locals are adamant to press on. Physicians at the the hospital in Izyum continued to treat patients, even after most of the building was destroyed by bombing. Others rebuild their communities.

“We prayed to God to be liberated,” Valeriy, a resident of Izyum, told CNN. Valeriy called Ukraine’s freeing of the city a “balm for the soul.”

Banner image: A woman collects wood for heating September 19 from a destroyed school where Russia's forces were based in Izyum, Ukraine. Ukraine recaptured the area earlier in September. (© Evgeniy Maloletka/AP Images)