Every four years, the United States elects a president. But the races that most affect Americans’ everyday lives are often local ones.

“When you get to a local level,” said Lowell Rathbun, one of five newly elected city council members in Sequim, Washington, “you’re engaged with candidates who have something to do with your everyday life, and you have a chance to get involved in bringing about real changes right in your own neighborhood.”

Local elections are held every two years — and sometimes annually — in more than 19,000 U.S. cities and towns. Offices and their duties vary, but all elected officials’ positions fall into the same three categories: executive, legislative and legal.

As in the federal government, state positions typically include judges and attorneys general. 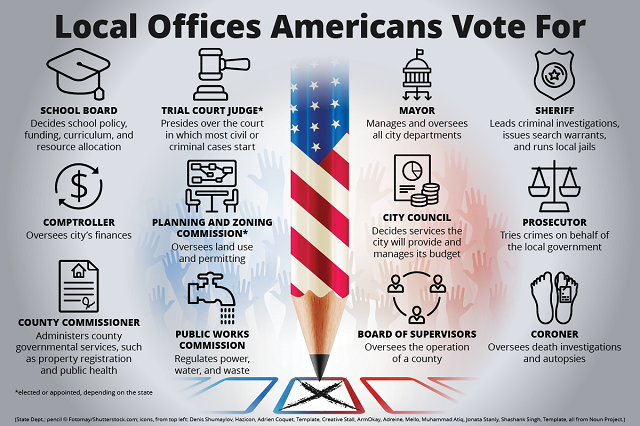 Towns and city governments determine local laws, frequently called ordinances, on subjects such as land use and noise restrictions. They also manage their own budgets. Many are responsible for providing police and fire protection services, and for public primary and secondary school education, among other duties.

Rathbun says he decided to run for office to make a difference in his community.

In November, he defeated his opponent by a 2–1 margin. The town also saw a record high voter turnout for a local election.

Sarah Methner has previously served on the Port Angeles, Washington, School Board and just won reelection in November. 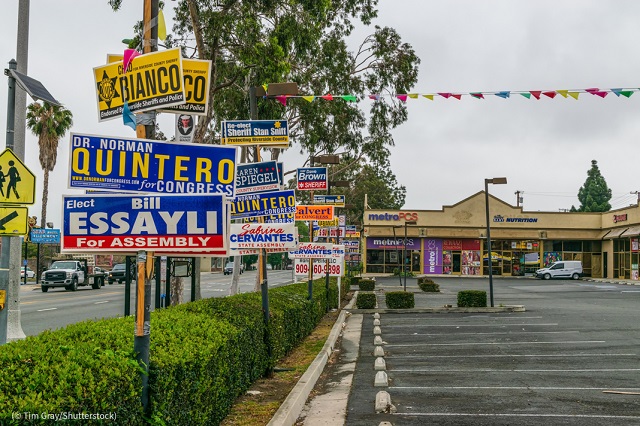 The main road in Corona, California, is covered in local, state and federal election signs on May 11, 2018. (© Tim Gray/Shutterstock)

“The reality is: What we do locally has far greater effect on children than what happens in the White House,” she says. “Who we hire, the curriculum we teach, the opportunities that children get — those are where things really do matter.”

Elected members of school boards in the United States decide the goals and policy for schools within their school districts.

Methner was inspired to run for the school board in 2008 because she cared about the finances in her child’s elementary school. Since 2009, she has overseen financial planning, public school curriculum and school rules.

Methner recommends that anyone considering running for local office go in for the long haul.

“Get involved,” she says. “I believe you go into a position like this to learn and to think and to have an open mind when you get on a board.”

To learn more about how federalism works in the United States, read our three-part series on federal, state and local government.