Love Is Love: How Same-Sex Marriage Became a Right in the United States

The 2015 U.S. Supreme Court decision that ensured a nationwide right to same-sex marriage was a significant milestone on the path to equal rights for lesbian, gay, bisexual, transgender, queer and intersex (LGBTQI+) people. The ruling came after many years of activism by individuals, organizations and lawmakers whose work changed hearts, minds, and — eventually — laws.

“Everyone is entitled to dignity and equality, no matter who they are, whom they love, or how they identify,” President Biden said.

Change came, but not overnight

In 2004, Massachusetts became the first state to legalize same-sex marriage. Thirty-seven others and the nation’s capital, Washington, followed. The Supreme Court decision ensured that marriages performed in any state in the country are legal marriages. Gay couples receive the same federal benefits as heterosexual couples and are entitled to protection under the law. 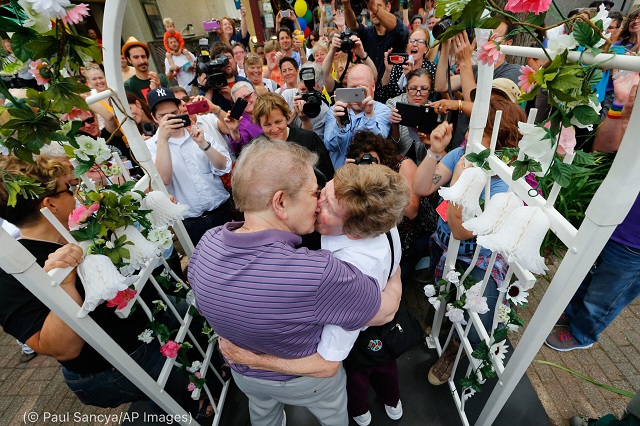 But a century ago, widespread acceptance of LGBTQI+ rights was unthinkable. The first U.S. gay rights organization, the Society for Human Rights, did not form until 1924, and it was shut down a year later under intense political pressure. Laws forbidding homosexual activity were only gradually repealed — beginning with the state of Illinois in 1962. The American Psychiatric Association considered homosexuality to be a mental illness until 1973.

The first major shift happened after June 1969, when a police raid of the Stonewall Inn, a New York gay bar, resulted in uprisings. Hundreds of protesters converged, inspiring activist groups. Each June, the Stonewall demonstrations are commemorated with gay pride parades in cities from New York to Vienna to Shanghai.

Today, hundreds of American activist organizations fight for laws and policies that support the LGBTQI+ community. Activists help homeless youth, 40% of whom identify as LGBTQI+. And activists push for LGBTQI+ families to receive the same immigration rights as other families and for LGBTQI+ refugees fleeing persecution to find asylum in the United States.

Support from outside the LGBTQI+ community

The movement enjoys increasing support from family members and straight “allies” who champion the rights of their LGBTQI+ friends and loved ones. PFLAG, the nation’s largest family and ally organization, has championed the cause for almost five decades.

“Being an ally might be something as simple as saying, ‘That joke you just told about a gay person isn’t funny,'” said Rabbi David M. Horowitz, a past president of the PFLAG national board. As part of their advocacy work, members contact government representatives to push for changes, such as laws to prevent hate crimes.

“When we speak with members of Congress, we change minds,” said Horowitz, whose daughter came out as a lesbian the night before her college graduation. Coming from a place of love and family helps PFLAG members influence leaders. “It’s hard to be angry with a person who loves his or her children,” Horowitz said.

The Human Rights Campaign has a long track record. Since 1980, its more than 3 million members and supporters have led campaigns to defeat bans on same-sex marriage and immigration by HIV-positive people. In 2013, the campaign welcomed its first two global engagement fellows, young activists from outside the U.S. who serve as the “eyes and ears” of their native communities.

In a prescient New Republic essay written in 1989, conservative author and blogger Andrew Sullivan called for marriage equality for LGBTQI+ people. He argued that legalizing gay marriage would “foster social cohesion, emotional security, and economic prudence … It is not, in short, a denial of family values. It’s an extension of them.”

“I’ve been overjoyed to see the advances we’ve made,” said Seth Adam, the former vice president of communications for GLAAD, an organization that monitors LGBTQI+ representations in the media. “This has been the result of over 50 years’ worth of work from activists.”

Adam said there will be more work for gay-rights activists ahead. “Marriage equality,” he said, “is a benchmark, not a finish line.”

A version of this story was previously published on June 23, 2016.