Tales from Ishinomaki: From “Feeling Sorry” to “Being Prepared”

Many of the people who rushed to Tohoku right after the March 11 earthquake and tsunami to do volunteer work are still active in the region. One such person is Masaharu Nakagawa, Managing Director/Secretariat of the non-profit organization 3.11 Future Support Association. We interviewed him to learn about his activities over the past ten years and his plans for the future.

Ten years ago, Nakagawa was in Fiji on a Japan Overseas Cooperation Volunteer mission for environmental education. When he heard the news that his home country had been struck by an unprecedented natural disaster, he knew he had to go to Tohoku, but he wasn’t sure which part. There were so many areas that had been hit hard.

He decided to start out in his hometown of Kyoto by volunteering to sort supplies and ensure that they were delivered to those who needed them most in the Tohoku region. The supplies were slated to be sent to either Sendai or Ishinomaki in Miyagi Prefecture. It was easier to send them to Sendai because the U.S. military had helped to get Sendai Airport back up and running. On the other hand, Ishinomaki was thought to be in worse shape than other areas, but the level of damage was still unclear. Eventually, Nakagawa decided to go to Ishinomaki, arriving there at the end of March 2011. The death toll in Ishinomaki was 3,186, and 416 people had gone missing. The coastal area of western Ishinomaki, where 46% of the population lived, was engulfed by the tsunami. In Kadonowaki and Minamihama, where the tsunami washed houses away and a fire erupted immediately, 147 people remain unaccounted for. Ten years later, Nakagawa is still working hard to inform people about the earthquake and tsunami, and promote disaster management. What compels him to stay there is the notion that “more lives might have been saved through disaster management education.” 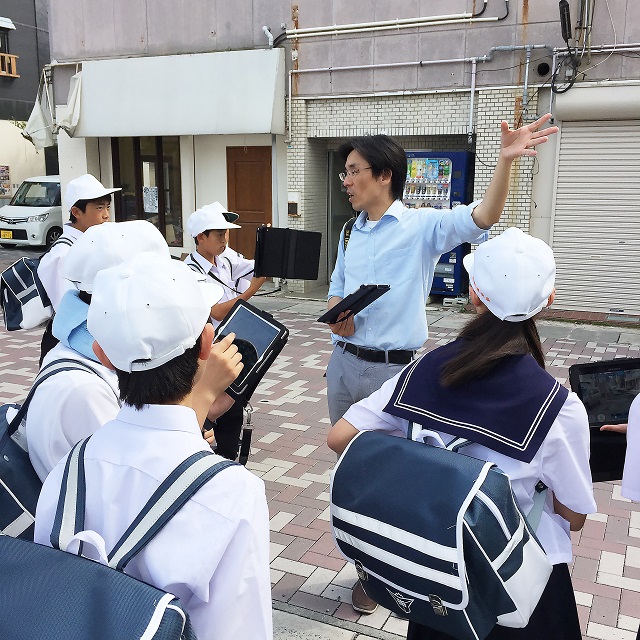 Based on the belief that the stories of what happened on that day must be told, Nakagawa has been striving to enable people who didn’t experience the disaster to comprehend the situation. “Storytelling” activities in which survivors tell visitors about their experiences started with local people telling volunteers their stories night after night. As the reconstruction proceeded, however, Nakagawa and others felt that “storytelling” was not sufficient to convey the lessons of the disaster. The 3.11 Memorial Hall Minamihama Tsunagukan, which first opened in 2015 in a prefabricated building, was relocated and expanded in 2017. They convey what happened using easy-to-understand displays such as 3-D models and projection mapping. They also developed an augmented reality (AR) tsunami app that enables visitors to view the tsunami damage in certain locations in Ishinomaki on their smartphones. The Bosai Machiaruki (disaster management walk) program that uses the app is the first of its kind in Tohoku. Visitors who used it commented: “I was able to experience firsthand the scale of the earthquake and tsunami,” and “I realized how dangerous it can be to subjectively assume that a tsunami wouldn’t be able to reach a certain point. It was a good opportunity to reevaluate my awareness of disaster prevention.” 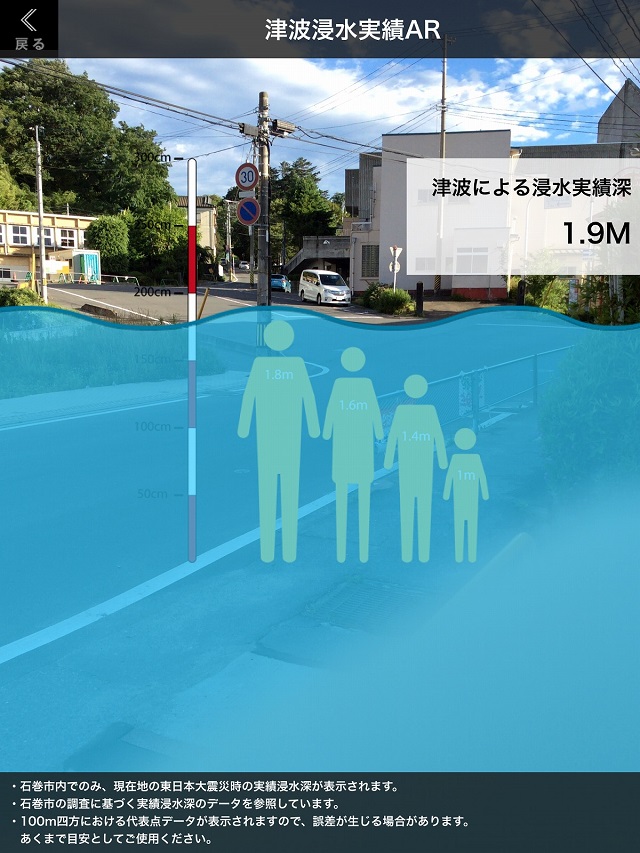 As part of his activities, Nakagawa participated in the Department of State’s International Visitor Leadership Program (IVLP) on disaster preparedness and emergency management in February 2020, right before the coronavirus pandemic hit. Since the participants hailed from 27 different countries and regions, Nakagawa was immediately struck by the diversity of the people gathered in the United States for the program. He was also stunned by the sheer size of a supply warehouse owned by an American nonprofit organization and surprised that municipal disaster management centers were integrated with nonprofit organizations. He said there was a great deal to learn from programs that don’t exist in Japan, such as a human resource development program conducted by the Federal Emergency Management Agency (FEMA) in collaboration with educational institutions focusing on crisis management. In particular, Nakagawa felt it was valuable to hear about what went wrong in New Orleans when it suffered tremendous damage from Hurricane Katrina. He learned that although the appropriate organizations were aware of the course and scale of the storm in advance, the evacuation did not proceed smoothly and many people died. Based on this experience, he said, there is a plan underway to use buses to evacuate local residents. When he learned that the levees that burst were rebuilt to the same height without much consultation with residents, Nakagawa felt the situation was similar to that of the Tohoku area. 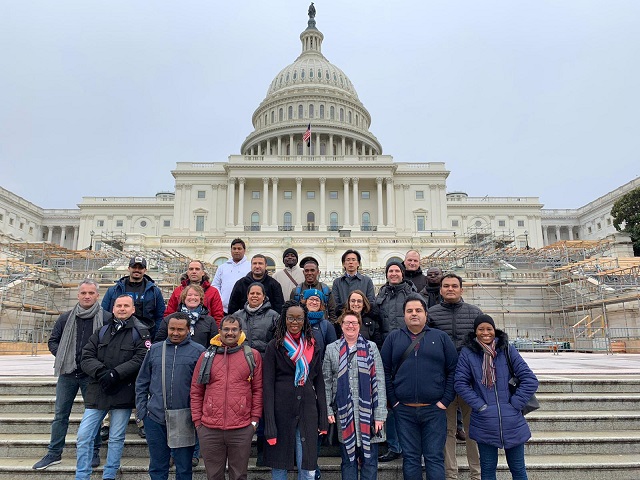 Nakagawa (top row, second from right) with his IVLP classmates.

Records of the actions taken when disaster strikes are valuable resources. Nakagawa and others interviewed 100 survivors in the Kadonowaki and Minamihama districts to compile their thoughts and actions on March 11, 2011. These accounts tell the stories of “lives that could have been saved,” such as the children who died when a bus left from a kindergarten on a hill and was hit by the tsunami in a low-lying area while the infants at a Kadonowaki daycare center were able to be safely evacuated by staff members on foot.

Partly because the theme of the 2020 Tokyo Olympics is reconstruction, the Japanese government has built memorial parks and facilities to convey information about the disaster. But the activities of the national, prefectural, and municipal governments are not sufficient to fully utilize these facilities. One example is a building constructed for the purpose of conveying information. Although the government may have handled the construction, Nakagawa and other local residents are the ones who are actually utilizing the space to conduct informational activities. The memorial parks, which are urban parks with no legal requirement to hold memorials or informational activities, must also be used by local residents as places for conveying information and conducting disaster management activities. Nonprofits like Nakagawa’s are taking on the roles not handled by the government. The opportunity to show the world Tohoku’s reconstruction has been postponed due to the global COVID-19 pandemic, and there has been a dramatic decline in the number of visitors to the areas affected by the disaster. However, the efforts to convey what happened on that day cannot be stopped. 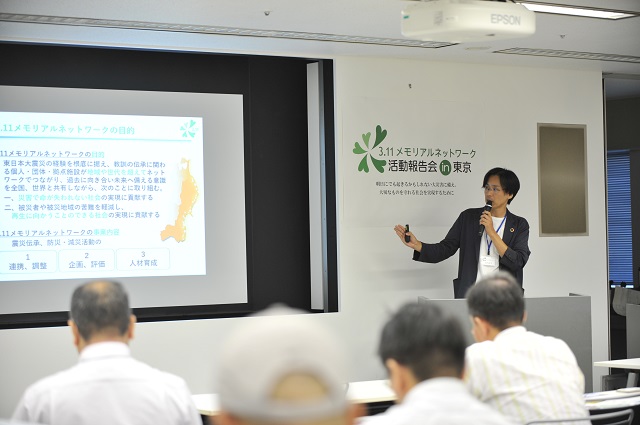 Nakagawa’s nonprofit, 3.11 Future Support Association, will open another facility called MEET Kadonowaki in March 2021. The facility will be in front of the memorial park and the Kadonowaki Elementary School, a physical remnant of the disaster. The purpose of MEET Kadonowaki is to tell the local residents’ stories of sorrow and hope, and heighten visitors’ awareness of disaster management.

MEET Kadonowaki will feature a display of personal effects on loan from families,  words of gratitude for volunteers, and a theater where visitors will be able to view images on a large screen of the actions 100 people took to evacuate at the time of the earthquake. The facility will place emphasis on disaster management education for children. Young storytellers who were children at the time of the disaster will talk about their experiences to children who did not experience it. There will be touchscreen panels created with the support of a manga artist through which visitors can experience the disaster through user-friendly content, and classes in which visitors can discuss their disaster management plans based on what they experienced at MEET. Although MEET Kadonowaki is not large, there are plans to collaborate with neighboring public informational facilities to organize field trips for students with the overall aim of transforming the disaster-stricken area, which has undergone great changes, into a place of learning. 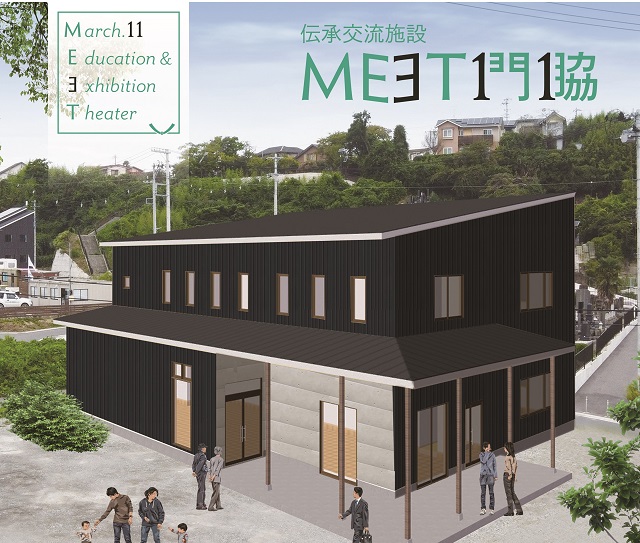 Nakagawa says he doesn’t want visitors to end their visits to the region just “feeling sorry” for people. Instead he wants to generate a shift in their awareness of disaster management. Japan has experienced many earthquakes and typhoons since 3/11. It is predicted that there will be a massive Nankai trough earthquake at some point. Nakagawa wants people’s awareness to change from “Hang in there!” to “Let’s change together!” and from “I’ll be okay,” to “I’ll be prepared.” This is the message that Nakagawa and others involved in informational activities want to convey from Tohoku to contribute to disaster preparedness around the world.

The landscape of the disaster-stricken area has changed over the past ten years. This is why the people there want to convey their experiences to future generations. MEET Kadonowaki is packed with Nakagawa’s good wishes for the region.