I will never forget the moment when I was sitting at my desk at the consulate in Sapporo and the ground began to move. Rather than violent shaking, it felt like ocean waves were passing under us.  Within minutes, tsunami warnings were announced on TV, and one of the Japanese local staff remarked that she had never seen this level of “Giant Tsunami Warning” before. Later I watched the same images you’ve all seen with horror, of dark waves sweeping away everything in their path up and down hundreds of kilometers of coastline.

Long hours of phone calls, record searching, and emails filled the ensuing days as we worked to identify and locate missing Americans. Although it paled in comparison to the number of Japanese killed and missing, we were deeply saddened to learn that two young American English teachers had passed away. The most difficult thing I’ve ever had to do in my professional career was to communicate bad news to their families back in the United States.

I longed to get back to my public diplomacy job, but amid this devastation, traditional cultural exchange programs seemed so insignificant, and perhaps even out of place. I then saw a news article about a classical flutist who performed at some evacuation centers. The striking pictures accompanying the piece showed the musician in his tuxedo in contrast to the emergency utility uniforms most visitors to the evacuation centers donned. Of more interest to me, however, was the reaction of the evacuees. They were touched that someone whose skills and vocation were not related to traditional rescue and recovery work still wanted to do whatever he could to support them. Not being a classically trained musician, I wondered how I might present some sort of meaningful cultural program to these audiences.  I dabbled on the guitar as a hobby, so I scoured my music notebooks and came up with a program highlighting American popular music from the folk era of the 1940s to the present day.

Shibata-san, a consulate driver, and I departed for Tohoku with my guitar, a barbecue grill, camping equipment, and some gasoline cannisters. Stopping by Misawa Air Force Base in Aomori prefecture, we stocked up on gasoline, charcoal, food for ourselves since restaurants and grocery stores were not operating in the areas where we were headed, and three key ingredients – chocolate, graham crackers, and marshmallows – the makings of the beloved American treat known as s’mores.

As we drove toward the Tohoku coast, everything initially seemed normal, but soon the departure from normalcy was upon us, abrupt and jarring.  As we neared Rikuzentakata, the scenery suddenly changed, with all sorts of debris along the side of the road. It was like crossing a well-defined line where one side was the world as we know it, and the other was total devastation beyond anything I had ever seen. An image seared into my mind is a heavily damaged but still recognizable Porsche 928 pushed off to the side of the road. It was the same grayish-brown color as almost all the debris and hardly distinguishable from all the other former possessions of people that had turned into garbage. It stood out to me in part because Tom Cruise’s character in the film Risky Business, which came out when I was in high school, drove the same model, and it was a dream car for many kids my age. Now it was just junk. 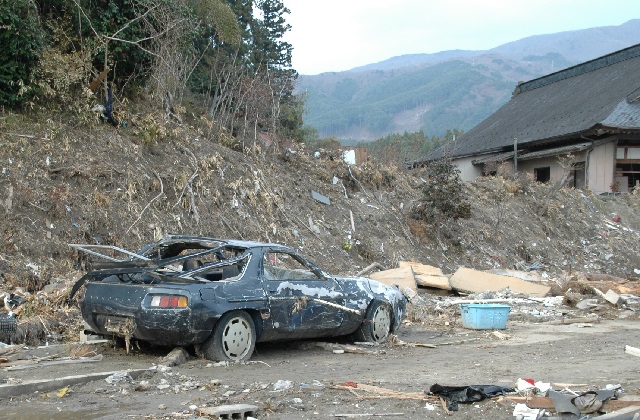 Porsche 928 pushed off to the side of the road (Photo courtesy of John C. Taylor, U.S. Consulate Fukuoka)

We arrived at an elementary school that had been turned into a makeshift evacuation center for dozens of families. As I made my way nervously to the stage, people were already assembled in the gymnasium since that was their living quarters. It was easily the largest crowd for whom I had ever performed, much larger than someone of my talent level deserved. They were polite and attentive, and even joined in some well-known numbers, like “Take Me Home, Country Roads” and an encore of Kyu Sakamoto’s “Ue wo Muite Arukou,” known in the United States as “The Sukiyaki Song.”

But I believe the highlight for most people came after the concert when we fired up the barbecue to demonstrate how to make s’mores. I figured kids would love them, but I was surprised how delighted many of the adults were as they turned their marshmallows over the grill, trying to achieve the perfect golden brown results. A recurring comment from the evacuees was that this was the first time since the tsunami that they had been able to forget about their plight and think about something else, even if only for a couple of hours. They also confided that it was nice to know people had not forgotten about them, since news coverage was dominated by Fukushima’s nuclear power plant disaster. 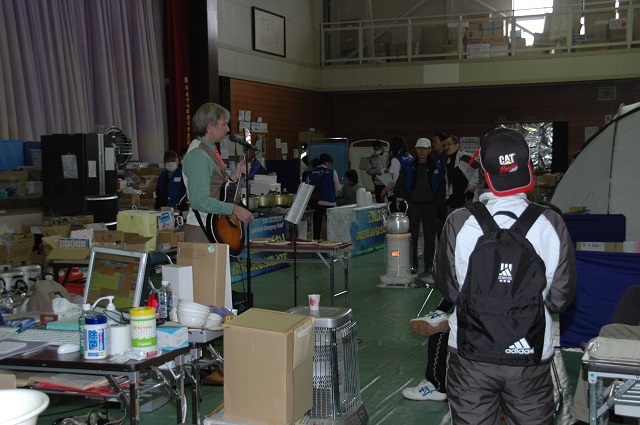 John Taylor on the stage at an elementary school in Rikuzentakata (Photo courtesy of John C. Taylor, U.S. Consulate Fukuoka)

We visited several more communities and evacuation centers up the coast as we made our way back toward Hokkaido. Hotels were not operating in the area, so I slept under pavilions at roadside rest areas or in parks while the driver slept in the car. Wanting to show as much respect as I could to the audiences and also desiring to differentiate myself from the important relief workers delivering critical supplies and working to restore power, water, and other essentials, I made it a point to wear a suit and tie at all of our engagements. I remember one morning getting dressed in a gardener’s shed in a municipal park and straightening my tie in the reflection of the car window. The conditions were definitely not what diplomats are accustomed to while traveling, but I knew I would soon be back in my comfortable home. Victims of the disaster, on the other hand, had no idea when or how they might find permanent accommodations, but displayed stoicism and good spirits that I found humbling and tremendously inspiring.

I have worked on public diplomacy programs with vastly larger budgets and dozens of staff, reached much larger audiences, and collaborated with high profile celebrities, but I’m not sure I have ever done anything more personally and professionally rewarding than this amateur music hour and “camping trip” with Shibata-san. I learned that sometimes just being there is more important than anything you might say or do while you are there. Ten years on, I say, “Ganbare Tohoku!” and thank you for the profound lessons in courage and resilience.

John C. Taylor is the Principal Officer at the U.S. Consulate in Fukuoka. He previously served as the Public Affairs Officer in Sapporo from 2009-2012 and has also had overseas assignments in Sweden, Indonesia, Afghanistan, and Zimbabwe. During his tour in Sapporo, he made many trips to Tohoku, both before and after the Great East Japan Earthquake and tsunami, including visits to devastated coastal communities where he programmed the first cultural events following the disaster at several evacuation centers.