OBO’s mission is to provide safe, secure, functional, and resilient facilities that represent the U.S. government to the host nation and support the Department’s achievement of U.S. foreign policy objectives abroad.

The organization has 289 locations in its global portfolio. One of its facilities that has a very unique conservation program is the U.S. Embassy in Tokyo, Japan. 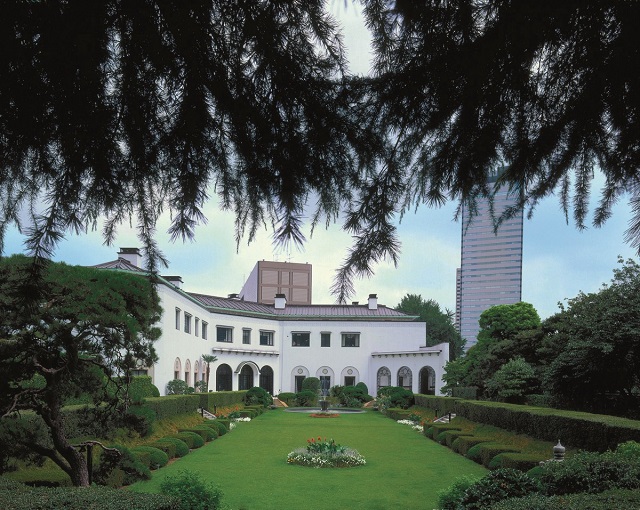 Garden view on axis, looking to the fountain and Ambassador’s Residence.

After the Kanto earthquake devastated Tokyo in 1923, the State Department sought to rebuild its embassy complex and expand its diplomatic footprint in the city.

The U.S. government commissioned architects Antonin Raymond and Harold Van Buren Magonigle to design the new U.S. embassy, ambassador’s residence, and housing for embassy employees. Plans for the residence and associated grounds were submitted in 1928.

Magonigle drafted the site layout and circulation pathways, and laid out a sunken garden to the east of the ambassador’s residence with a circular fountain as its signature. The basin of the fountain consists of ceramic tiles of differing shapes and sizes, arranged with the darkest colors at the perimeter. A bronze cistern in the form of a lotus flower rises from the center. Today, only the ambassador’s residence and gardens are extant.

OBO’s Office of Cultural Heritage’s (CH) mission is to pursue the preservation of American history and architecture through the education, maintenance, and conservation of heritage assets. This includes archaeological sites, landscapes, buildings, fine arts, and other cultural heritage items. In 2017, the CH team initiated a conservation program to restore the diplomatic landscape of the ambassador’s residence. While the fountain water still flowed, the basin tiles and bronze lotus needed repair. The artistic elements of the fountain were an integral part of the program that would also include the metalwork of the building’s front doors and the wooden benches in the garden. For the fountain, CH conservators joined with local artisans to establish a restoration protocol for the tiles and bronze. 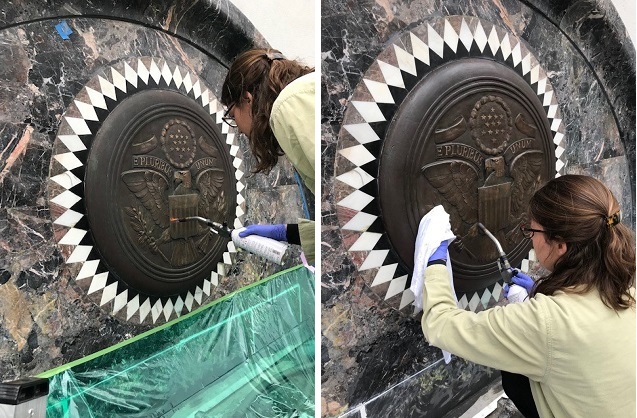 Lauren Hall, conservator, applying patina and wax to the bronze seal over the main entrance to the CMR.

Pool tiles before (left) and after (right) restoration

During the project, members of a metal casting guild were invited to examine the lotus urn and recognized it as the work of craftsman Torazo Yamasaki. Through further research with embassy staff, they located two of his granddaughters and brought them to the property to view the monumental contributions of their late grandfather. Prior to their visit, Yamasaki’s granddaughters had never seen his masterpiece because of its location within the grounds of the residence. Yet, its placement within the U.S. embassy properties in Tokyo protected the urn during World War II when metals were confiscated to support the war effort….A unique example of preservation.

The craftsman’s family knew about the urn’s commission for Torazo Yamasaki’s firm, that remained in operation until 1993, but they had believed the bronze lotus had been melted during the war. They recalled that it took six months for Yamasaki to make the bronze urn which weighed 450 kilograms. Details provided during the visit influenced the conservation project of a rare survivor of bronze sculptural forms from the interwar period in Japan and restored the artisan’s name to a defining feature of the cultural setting.

Renewal of the fountain bronze and tiles was completed in 2018, 80 years after the approval of designs that produced a Modern architectural statement for Mission Tokyo. The stark geometry of Modernism was softened with materials and symbols of Japanese art and culture. In a meeting by chance, Yamasaki’s heirs cast new light on the lotus sculptural urn and on the aesthetic first crafted for the ambassador’s residence following the earthquake.

“OBO and the Office of Cultural Heritage are not only invested in the preservation of the U.S. embassies and consulates around the world, but we are also passionate about uncovering the unique stories that shape history and bridge the gaps between historic preservation and the current societal trends, during the process,” said OBO Director, Tad Davis. 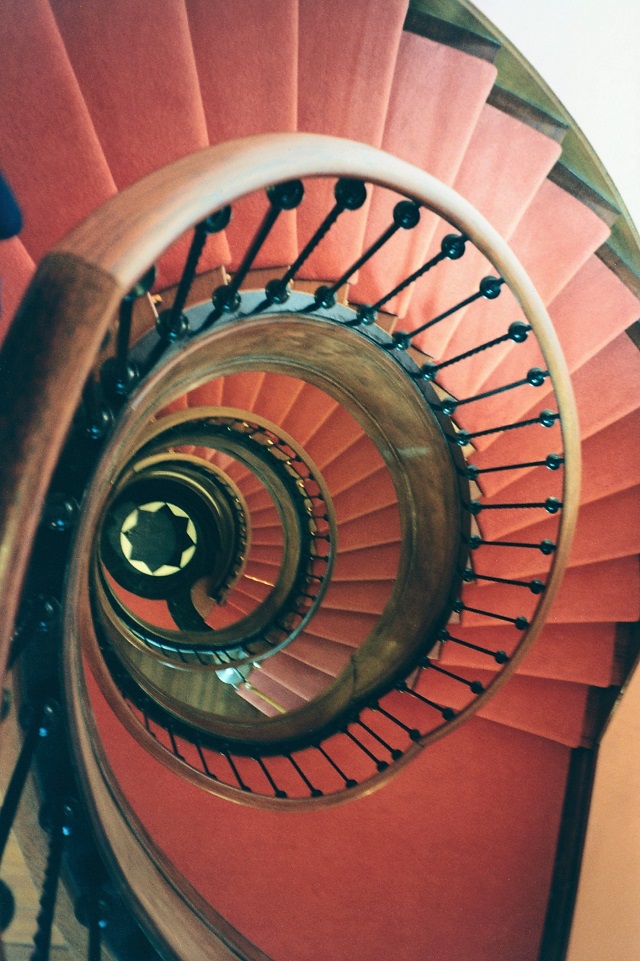 Inside of CMR spiral staircase.

“As we reflect on the rich history of the State Department’s historically and culturally significant properties, we remember the U.S. Embassy Tokyo Ambassador’s Residence and many of our other hidden gems across the globe, and the people who worked tirelessly to preserve the sacred elements of each one. We are proud to be stewards of preservation, not just during National Preservation Month, but each and every day.”

For more information on OBO’s Office of Cultural Heritage or the Secretary’s Register visit:  https://www.state.gov/overseas-buildings-operations/

Adventures in Preservation (AiP) is a leader in offering volunteer vacations focused on saving the world’s architectural heritage. As a non-profit, AiP connects people and preservation through enriching experiential travel and hands-on education. AiP was founded in 2001 by two women with a great love of historic buildings and a strong desire to travel and understand the world. Requests for assistance began to pour in from around the world, underscoring the great potential of using volunteers to restore historic buildings. Hands-on preservation projects translate into both environmental and economic sustainability for AiP’s project communities.