Art and culture professionals from Ukraine, the United States and around the world are rushing to save Ukraine’s most treasured sites from Vladimir Putin’s unprovoked war.

“The situation for museums and cultural institutions is no different from hospitals, schools and residential areas; we are all under shelling,” Olesia Ostrovska-Liuta, director of the Mystetskyi Arsenal art museum in Kyiv, Ukraine’s capital, told the BBC. 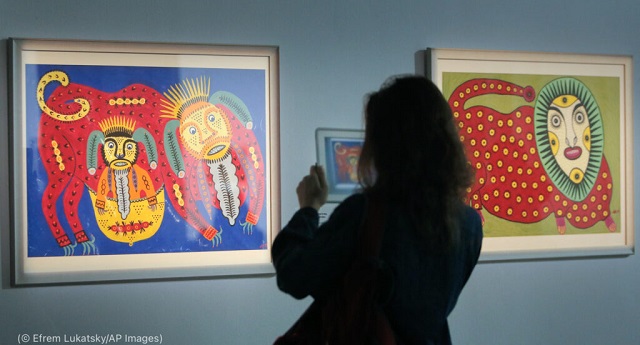 Pieces of work by Ukrainian artist Maria Prymachenko, similar to these displayed at the Mystetskyi Arsenal art museum in Kyiv, in 2016, were damaged by Russian bombing February 27 in Kyiv. (© Efrem Lukatsky/AP Images)

Russian bombing has already damaged about 25 works by Ukrainian folk artist Maria Prymachenko that were stored in Ivankiv Museum, Kyiv. Picasso had called her an “artistic miracle.” Another 25,000 pieces of art were exposed to snow and rain when another bomb hit near Kharkiv’s main museum weeks ago, possibly causing irreversible damage.

Ukrainians and others around the world have mobilized to prevent further damage. Ihor Kozhan, general director of one of Ukraine’s largest museums, the Andrey Sheptytsky National Museum in Lviv, told the Associated Press in March that he receives daily calls from other European cultural institutions offering to help as he and his staff race to preserve the museum’s works. His staff spent days boxing the artwork for safekeeping. 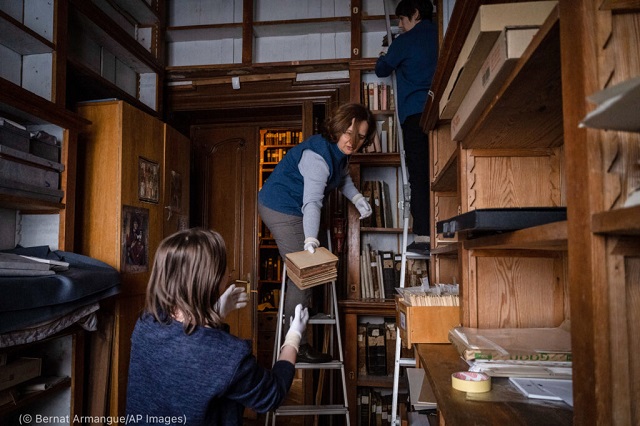 Workers at the Andrey Sheptytsky National Museum in Lviv on March 4 move rare manuscripts and books to reduce the risk of damage if Russian forces attack. (© Bernat Armangue/AP Images)

“If our history and heritage are to survive, all art must go underground,” Kozhan told The Washington Post.

In Odesa, the director of the Odesa Fine Arts Museum ordered razor wiring to be placed around the museum’s perimeter to prevent destruction by invading Russian forces. The museum contains 10,000 pieces of work, the earliest dating back to the 16th century. Also there: some of the rarest works in the world by avant-garde artist Wassily Kandinsky, who spent much of his childhood in Odesa.

Downtown, volunteers piled sandbags around the public monument of the Duke of Richelieu, in case a nearby bomb strays too close and the resulting shrapnel damages the bronze. 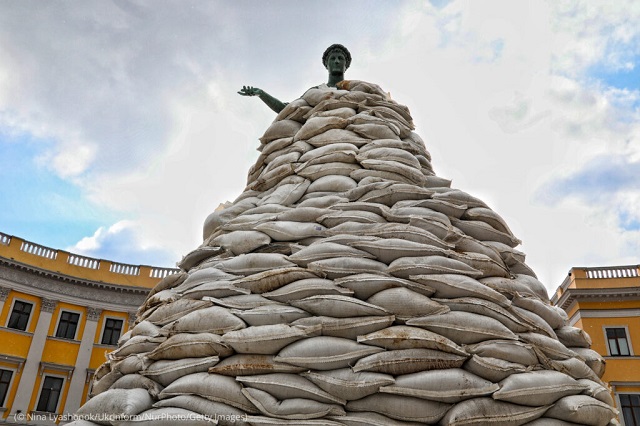 Sandbags surround the monument to the Duke of Richelieu in Odesa in an attempt to protect it March 9. (© Nina Lyashonok/Ukrinform/NurPhoto/Getty Images)

Elsewhere, librarians, archivists and researchers are involved in Saving Ukrainian Cultural Heritage Online, using a combination of technologies to archive sites and content.

“If we lose our culture we lose our identity,” Lilya Onyschenko, the head of Lviv’s city council heritage protection office, told The Guardian.

The U.S. government, educators and citizens are doing their part.

Hayden Bassett, the assistant curator of archaeology at the Virginia Museum of Natural History and the director of the museum’s Cultural Heritage Monitoring Lab, has helped develop a geospatial database of cultural property in Ukraine. 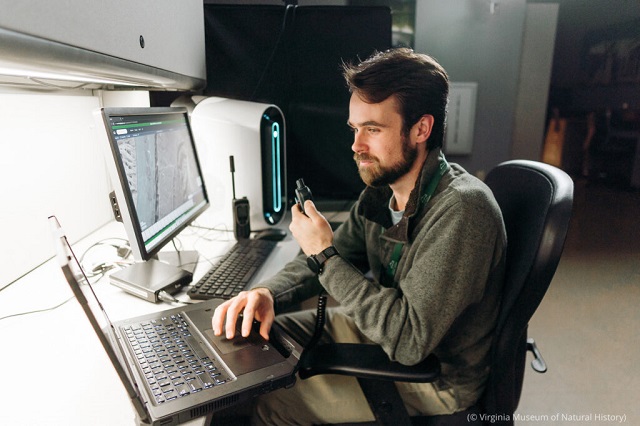 Experts like Bassett who study satellite imagery are monitoring many places in the country, including:

“To the courageous Ukrainian citizens physically safeguarding their cultural heritage, what is needed most is information — when and where cultural properties are impacted or vulnerable,” he told UVA Today.

Saint Sophia Cathedral (right) in Kyiv is among the seven UNESCO world heritage sites that could be endangered by shelling. Inside the cathedral is the Mosaic Oranta, an Orthodox Christian depiction of the Virgin Mary from the 11th century. Left photo: (© Efrem Lukatsky/AP Images) Right photo: (© Ruslan Kalnitsky/Shutterstock.com)

Since 2002, the U.S. government has provided more than $1.7 million to support 18 cultural preservation projects in Ukraine. Support is provided by the U.S. Ambassadors Fund for Cultural Preservation, a program of the Bureau of Educational and Cultural Affairs in the U.S. Department of State.

“Ukraine’s cultural heritage is irreplaceable, and its damage or destruction would be a profound loss to the entire world,” said Assistant Secretary of State for Educational and Cultural Affairs Lee Satterfield.

Banner image: Workers at the Andrey Sheptytsky National Museum in Lviv move the "Annunciation to the Blessed Virgin of the Bohorodchany Iconostasis" March 4 as part of safety preparations in the event of a Russian attack. (© Bernat Armangue/AP Images)