The illegal wildlife trade, generating almost $20 billion annually for criminal syndicates, is under pressure from the United States.

The Presidential Task Force on Wildlife Trafficking in 2015 activated a three-pronged strategy to promote law enforcement, build international cooperation, and reduce demand for wild animals and their parts. The U.S. attorney general and secretaries of State and Interior co-chair the task force, which draws upon 17 federal agencies to implement the National Strategy for Combating Wildlife Trafficking.

In 2018, the U.S. government earmarked $122 million to combat wildlife trafficking worldwide, according to the 2019 END Wildlife Trafficking Strategic Review. 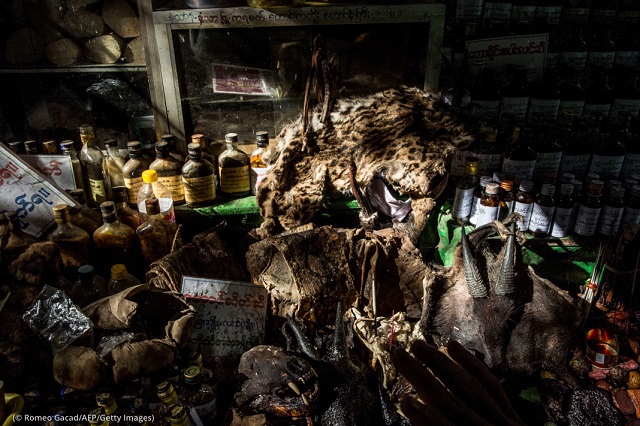 The skin of a rare wild cat is displayed with other wild animal parts at a traditional medicine shop in Myanmar. (© Romeo Gacad/AFP/Getty Images)

“We work with a whole-of-government approach on strategic avenues to stop wildlife trafficking globally,” said Rowena Watson of the State Department’s Bureau of Oceans and International Environmental and Scientific Affairs.

The loss of iconic species from anywhere in the world affects tourism and takes resources away from countries that need them for their own sustainable development, according to Mary Rowen, senior wildlife adviser for the U.S. Agency for International Development (USAID). “We don’t want to lose them for any reason — such loss affects many,” she said.

Demand for protected species — among them pangolins, elephants and rhinos — drives the illegal and lucrative trade. Demand is on the rise in Asia, particularly in China, due to the spending power of a burgeoning middle class. “China is definitely at the heart of the problem,” said Watson, who leads a wildlife conservation team at the State Department.

Crimes against elephants and rhinos in Africa hurt locals in several ways. They fuel corruption and undermine the rule of law and hard-fought conservation gains. Such crimes rob communities of their natural resources and livelihoods, Watson said. Other species hunted for food — including pangolins, primates, rats and bats — can carry diseases that may spill over into one person and then spread, through a village or around the globe.

Rhino horns, made of the same protein as human fingernails, are ground up and used in traditional Asian medicines. They’re also sold as status items — used in jewelry, for instance. In a recent year, 508 rhinos were plundered from South Africa alone, according to the World Wildlife Fund.

An estimated 195,000 pangolins, found in both Africa and Asia, were trafficked in 2019 for their scales alone, the World Wildlife Fund reports. Pangolin meat is considered a delicacy in China and Vietnam, and the mammal’s scales are purported (without evidence) to improve lactation in nursing mothers and cure certain diseases. 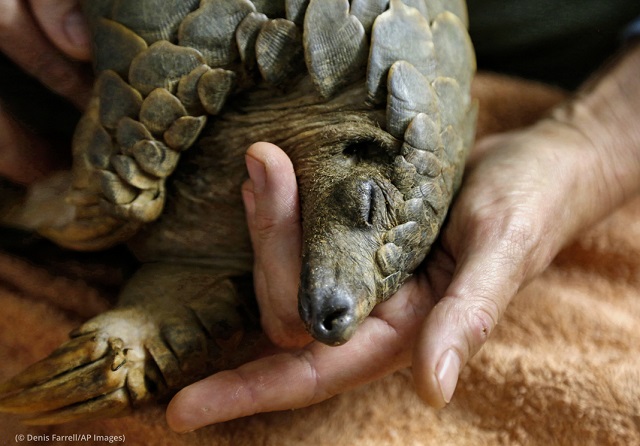 After being rescued from poachers, a pangolin recovers at the Johannesburg Wildlife Veterinary Hospital. (© Denis Farrell/AP Images)

U.S. agencies that are part of the Presidential Task Force on Wildlife Trafficking are taking steps to end trafficking: