By Jason Dyer with contributions from Ed Burleson and Jo Narita

The Japanese and American staff who worked in the Consular Section at the U.S. Embassy in Tokyo at the time served at the front lines to assist Americans in the affected region. To this day, scenes of destruction remain seared vividly in our memories, but we also remember the kindness of the Japanese people, the resilience and strength of their resolve to rebuild, and most importantly, the U.S-Japan friendships that have grown as we faced the challenges stemming from the immense tragedy together and deepened our cooperation in crisis response over the past decade. 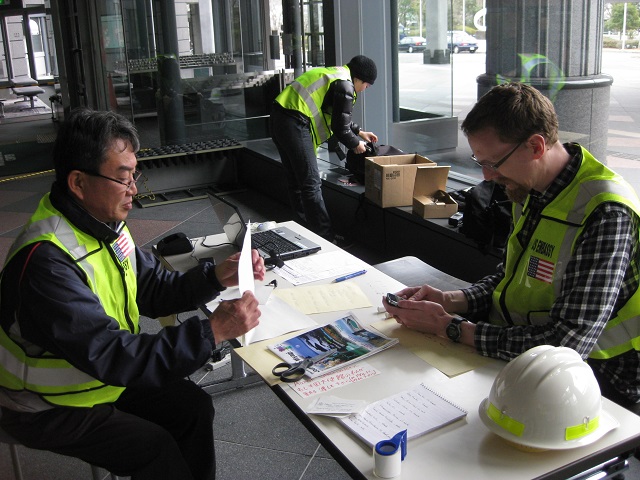 Part of the consular field team sent to Miyagi Prefecture after the earthquake and tsunami, Hitoshi Sekino (left), Andy Utschig (right), and Yoshie Ushimaru (background), set up a makeshift post to help Americans at the Sendai International Center. (Photo courtesy of Ed Burleson)

For most Japanese citizens, a visit to the U.S. Embassy means a quick trip to the Consular Section to get a visa. Similarly, most Americans visit the Consular Section to renew a passport or have a document notarized. But what many of these visitors may not realize is that all consular sections at U.S. embassies around the world are prepared to become crisis response centers in times of need. On March 11, 2011, the team of consular officers and local staff at the U.S. Embassy shifted gears.

On the afternoon of the earthquake, our staff were busily working in the office. Visas were being issued, passports were being printed, and it was business as usual. In the blink of an eye, everything changed.

Within hours, Embassy Tokyo set up a 24/7 Consular Crisis Response Center that operated for 28 days. The consular team searched and accounted for more than 5,400 Americans. With invaluable assistance from Japanese authorities and residents, our officers traveled to the disaster area and located scores of missing Americans.  They also arranged for over 140 individuals to be evacuated from the disaster areas, and arranged two safe-haven flights to Taipei carrying over 100 Americans. 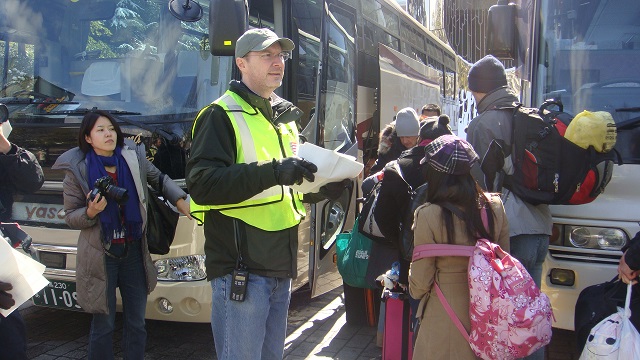 Ed Burleson helps Americans get on the Embassy Tokyo-chartered bus from Sendai to Tokyo. (Photo courtesy of Ed Burleson)

One of the team members, still working at the Embassy today, recalls: “Our first step was to make contact with the city government in Mito, which had been moved off-site. We met with local officials who were happy to help. Japanese authorities and local residents expressed their appreciation for the disaster assistance the U.S. government was providing, as well as our willingness to come to the area. Authorities in charge of shelters helped us figure out if any U.S. citizens were staying there. Even managers at grocery stores let us know if any U.S. citizens had come through recently. This kind of time-sensitive support, going both ways, cannot be given without trust and everyday communication. Even when talking with private citizens, I felt the strong relationship between the United States and Japan. The Great East Japan Earthquake revealed numerous lessons and ways we can improve, but it also showed the true strength of our bonds.”

We remain extremely grateful for the help that was given to the Embassy, and to our citizens in the area, throughout the crisis. At the end, it was clear that our success depended on our deep and lasting cooperation with Japan. In the years since the Great East Japan Earthquake, we have worked to strengthen our bonds and increase our collaboration on all aspects of crisis preparation.

Today, U.S.-Japan coordination on disaster preparedness is stronger than ever. The Embassy participates in disaster response preparations at the municipal, prefectural, and national levels. Among countless examples, we’ve attended yearly drills at Roppongi Hills, taken our teams to the Honjo Life Safety Training Center, and visited tsunami shelters along the coast.

On our social media accounts, we make sure to amplify advice from the Government of Japan and share disaster preparation tips. Every year as typhoon season approaches, we put into practice the lessons we have learned--building upon this knowledge year after year and strengthening our coordination with Japanese authorities.

Earlier this year when hundreds of American citizens were evacuated from the Diamond Princess cruise ship and those who tested positive for COVID-19 or had other health emergencies were hospitalized, we worked closely with public health authorities and local officials at all levels. With invaluable assistance from the Ministry of Foreign Affairs and the Self-Defense Forces, we were able to successfully bring more than 400 Americans home safely.  Thanks to Japan’s high-quality health care system, every U.S. citizen who was hospitalized was able to return to their friends and family.

With one decade behind us, we will continue to remember the Great East Japan Earthquake and keep the victims in our thoughts. We will honor them through our commitment to always stand by our Japanese friends and colleagues in times of need and work closely with local officials on crisis response. For now, the Consular Section will keep issuing visas and passports, but we know that in an emergency, we’ll be ready to respond together.

Banner image: Yoshie Ushimaru, Ed Burleson and Andy Utschig talk to police in Ishinomaki to inquire about missing Americans in the days following the earthquake. (Photo courtesy of Ed Burleson)