U.S. university and college students are developing innovative projects to protect the planet.

Students in the United States can learn from some of the greatest minds in science, technology and engineering. One result: a lot of climate innovation on campus and beyond.

When the Musk Foundation called for project proposals to sequester a billion tons of carbon dioxide per year, students at the University of Miami answered.

Senior Laura Stieghorst heard about the contest after following the spring 2021 SpaceX launch. She approached Greg Rau, a senior researcher and carbon-sequestering specialist with the Institute of Marine Sciences at the University of California Santa Cruz, to pull together a team of University of Miami students to design a workable model and write a research proposal.

Their solution? Dissolvable tablets that absorb carbon in the ocean. In November 2021, they were among five student winners of a $500,000 prize.

“I had so much confidence in the solution that I imagined this happening,” she told University of Miami. “But everything we did was theoretical. So, now we have to prove the idea works in the real world and at scale.”

Harvard’s John A. Paulson School of Engineering and Applied Sciences offered a class to develop a microplastics filter.

Sponsored by German chemical company BASF, the class challenged students to engineer a method for removing microplastics from water. Microplastics negatively affect aquatic species and bird populations around the world.

In the student-devised system, small bubbles within water stir up plastic particles inside a reactor. Then, an added compound moves the particles to the surface where they can be collected.

”We’re all engineers, but since we came from different specific types of engineering, it was really interesting to work within a team that diverse,” said Maggie Schultz, one of the students and the team’s project manager. “I definitely think that was a big learning outcome for me.”

While an undergraduate student at University of Pennsylvania, Katherine Sizov and her classmates engineered ethylene sensors to detect when fruit begins to rot. The sensors’ purpose is to reduce food waste, which is responsible for 6% to 8% of global greenhouse gas emissions. 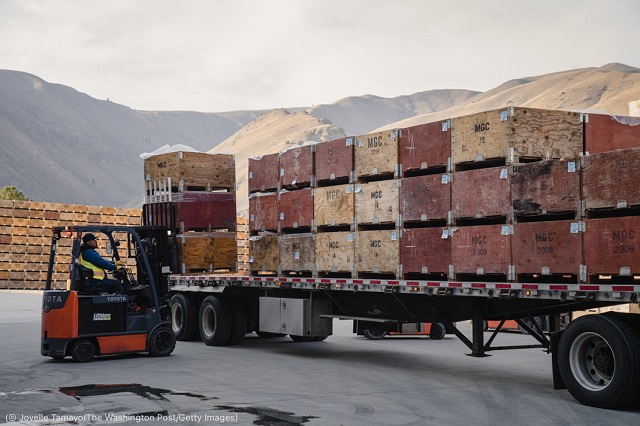 A large percentage of produce spoils in warehouses before reaching the supermarket. The sensors developed by Sizov’s team alert produce suppliers to the levels of chemicals released by apples, pears and other produce so suppliers know the best time to sell to grocery stores.

After graduation, Sizov created her own company — Strella Biotechnology — to refine the sensor’s technology. Over the past few years, Strella has sold the sensors across the country, and now more than half of U.S. pear and apple packing houses use them.