When disaster strikes around the world, workers and volunteers associated with World Central Kitchen rush in to cook fresh meals and serve them to survivors.

Since then, the nonprofit has served more than 250 million meals. This year alone, donors around the world have helped the nonprofit raise more than $450 million. “We adapt and harness the power of food to create a better tomorrow,” Andrés said on Twitter. “Where there’s a fight so hungry people may eat, we will be there.”

The Washington-based nonprofit organization sets up community kitchens that mobilize resources from local partners — which include food trucks, emergency kitchens and area restaurants. 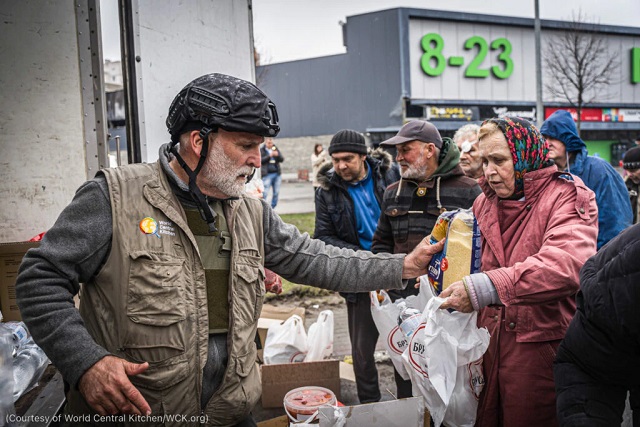 José Andrés helps residents in Bucha, on the outskirts of Kyiv, as they collect food to go. (Courtesy of World Central Kitchen/WCK.org)

World Central Kitchen centers a lot of its work on feeding people who have survived natural disasters. The nonprofit uses climate data to help predict the locations most likely to experience natural disasters and remains in touch with partners around the world. But World Central Kitchen helps during conflicts as well. After Vladimir Putin launched his further unprovoked invasion of Ukraine February 24, World Central Kitchen snapped into action to form Chefs For Ukraine, which operates from seven countries in addition to Ukraine — Poland, Moldova, Slovakia, Romania, Hungary, Germany and Spain.

To date, Chefs For Ukraine has served more than 176 million meals — including hot meals on the spot and food kits that people can take home — to displaced people in Ukraine and refugees who have left the country. Its work changes based on the needs and flow of people.

Cooking continues despite two Russian missile attacks, in April and June, that hit World Central Kitchen-affiliated sites in Ukraine. One struck a relief kitchen, injuring four of its staff members. The other one hit one of the nonprofit’s train cars that was filled with food.

“Operating in a war zone comes with extreme challenges, and a constantly evolving landscape,” said Erich Broksas, the nonprofit’s interim co-executive leader and chief operating officer. “The winter in Ukraine has arrived and with it a deeper need to support Ukrainians as they continue their effort, and hopefully we see the war come to an end.” 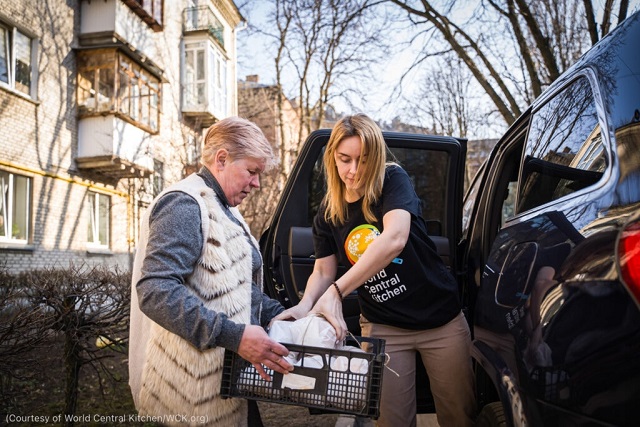 World Central Kitchen dispatched food workers around the world this year, including in Mexico and Brazil.

Brazil’s heavy rain and flash flooding in Petrópolis in February and March and in Pernambuco in May killed more than 300 people and displaced thousands more. World Central Kitchen served 36,000 hot meals and distributed 2,000 food kits in Pernambuco. In Petrópolis, the organization fed first responders, displaced families and people in neighboring regions who could not access aid.

In Mexico, the nonprofit’s chief relief team helped communities in Oaxaca after Hurricane Agatha hit the region in May, a disaster that left 11 people dead and 200,000 people without power. The nonprofit supported 43 communities by distributing 41,000 kilograms of food and 36,000 hot meals, sandwiches and fruit.

The kitchen’s staff learns from the communities how to prepare meals that offer a taste of home. When they’ve served people in Haiti or the Bahamas, they have cooked legim, a vegetable stew served with white rice. In Ukraine, workers have served meals with Ukrainian borsch, a soup made with red beets.

“Our culinary standards ensure that the people we uplift after emergencies through food receive meals that are nourishing, culturally appropriate, safe to eat and served with dignity,” Broksas said.