When the Japanese broke Allied military codes used to protect operational plans in the Pacific theater during World War II, the U.S. Marines turned to the Navajo Nation for help.

The Marine Corps selected 29 Navajo men to develop a code based on the complex, unwritten Navajo language. In 1942, Marines hit the beaches of Guadalcanal with 15 Navajo Code Talkers. 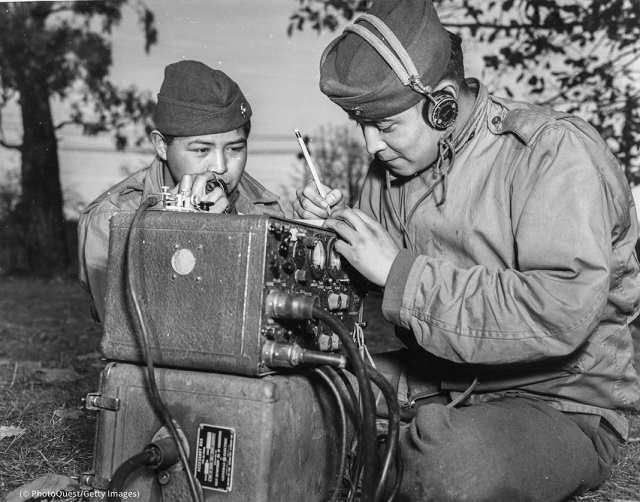 “This was the first battle where the Navajo code was to be tested in actual battle to test to see how our memory would be under heavy enemy fire,” Code Talker Peter MacDonald said at a 2017 White House ceremony honoring the Code Talkers. “Well, three weeks after the landing, General Vandegrift, commander of the 1st Marine Division, sent word back to [the] United States saying, ‘This Navajo code is terrific. The enemy never understood it,’ he said. ‘We don’t understand it either, but it works. Send us some more Navajos.'”

The Code Talkers sent communications by telephone and radio in their native language, substituting Navajo words for military terms that weren’t part of their language. For example, the word for “bomb” was “potato” and the names of different birds stood in for different types of aircraft. They also used alternative terms for letters in the English alphabet to spell words that weren’t part of the code.

Code Talkers could translate three lines of English in 20 seconds, instead of the 30 minutes it took to encode a message with existing machines, according to the Office of the Director of National Intelligence. And while those machines needed to be kept secure, a Code Talker with a radio could go anywhere.

The Code Talkers participated in every major Marine operation in the Pacific theater, National Public Radio reported, giving their fellow Marines an important advantage throughout the war. During the nearly monthlong battle for Iwo Jima, for example, six Code Talker Marines successfully transmitted more than 800 messages.

The Japanese never did crack the code, and the Code Talkers are credited with creating the only unbreakable code in modern military history. Their service continued through V-J Day, which marked the end of World War II in 1945.

“You are special people,” President Trump said at the White House event. “You are really incredible people. And from the heart, from the absolute heart, we appreciate what you’ve done, how you’ve done it, the bravery that you displayed and the love that you have for your country.” 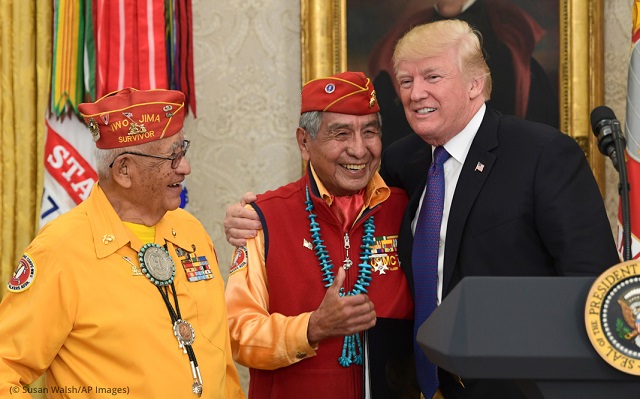 By the end of the war, some 400 Navajos had served as Code Talkers and 13 had been killed in action. The Code Talkers kept their work a secret for decades until the military declassified the program in 1968.

“We recall a story that all Americans can celebrate and every American should know,” Bush said at the ceremony. “It is a story of [an] ancient people called to serve in a modern war. It is a story of one unbreakable oral code of the Second World War, messages traveling by field radio on Iwo Jima in the very language heard across the Colorado plateau centuries ago. Above all, it’s a story of young Navajos who brought honor to their nation and victory to their country.”