U.S. States and Localities Offer Ballots in Many Languages

Voting is an important cornerstone of democracy. And in the United States, ballots appear in multiple languages to help voters with limited English proficiency choose their leaders and weigh in on issues.

In California, for example, voters will be able to request a November 3 ballot written in Arabic, Armenian, Hmong, Korean, Persian, Spanish, Syriac or Tagalog, among other languages.

Whitney Quesenbery, director of the Center for Civic Design, sees translated ballots as a basic step and a bridge to fuller participation in American democracy. The ballots help give first-time voters confidence that they’re filling out the ballot correctly.

“The more we can help people understand the mechanics of voting … the easier it is for them to take that big step in becoming a full member of our society,” Quesenbery says.

To eliminate barriers at the polls faced by some Alaskan Native, Native American, Asian American and Spanish-heritage citizens, the U.S. Congress added language-access provisions in 1975 as amendments to the Voting Rights Act of 1965.

Under Section 203 of that amended act, jurisdictions must provide language assistance if more than 10,000 or 5% of voting-age citizens belong to a single language minority group, have depressed literacy rates and don’t speak English very well. 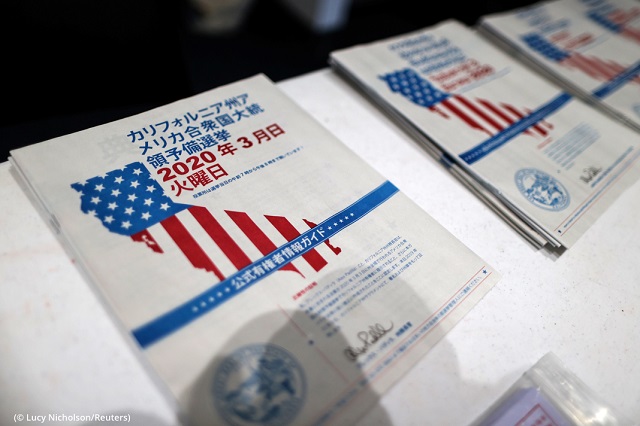 Translations must be offered in general and primary elections, bond elections and referendums, as well as local elections within jurisdictions, school districts or special-purpose districts.

At times, local governments have gone beyond the basic language requirements. In October 2019, for example, the Cook County Board of Commissioners in Illinois passed an ordinance to furnish voters with fully translated ballots in eight new languages for the November 3, 2020, elections. (It already provides ballots in English, Spanish, Chinese and Hindi, according to the Chicago Sun-Times).

Cook County is home to 5.2 million people living in the city of Chicago and several northwestern suburbs. Thirty-five percent of Cook County residents speak a language other than English at home.

In the March 17 presidential primary, the first election held in Illinois under the new ordinance, Cook County residents could request electronic and mail-in ballots written in Korean and Tagalog. For the upcoming presidential and local elections on November 3, the county will provide electronic and mail-in ballots as well as audio assistance in six more languages: Arabic, Gujarati, Polish, Russian, Ukrainian and Urdu.

County officials will use the U.S. Census to determine which precincts will be best served by printed ballots in those eight languages and if new languages should be added next year, says Cook County Board Commissioner Kevin Morrison, a lead sponsor of the ordinance.

“The core of our democracy demands that all residents have equal opportunity and access to exercise their right to vote, regardless of the language they speak, their physical ability or their level of literacy,” Cook County Board President Toni Preckwinkle said in a statement.