Plastic pollution affects every place on the planet, from the belly of an animal in remote Antarctica to the trees of the Sahel to the highest mountains in the Himalayas. It can take centuries to degrade.

In the United States, the public and private sectors are working to reduce plastic pollution globally.

The U.S. Department of State worked with partners at the United Nations to launch negotiations for a global agreement on plastic pollution at the U.N. Environment Assembly.

Plastic pollution that enters the ocean is indifferent to political boundaries. This week at the @UN Environment Assembly 5.2, the United States is working with our counterparts to find innovative solutions to this global problem. #UNEA pic.twitter.com/YNEgP40nPw

Private sector gets to work

The U.S. Plastics Pact was established in August 2020 as part of the Ellen MacArthur Foundation’s worldwide Plastics Pact network. The goal is to create a path toward a circular economy for plastics, meaning reused plastics would replace new plastics.

The participating U.S. private sector companies in the pact represent one-third of the U.S. supply of plastic packaging. 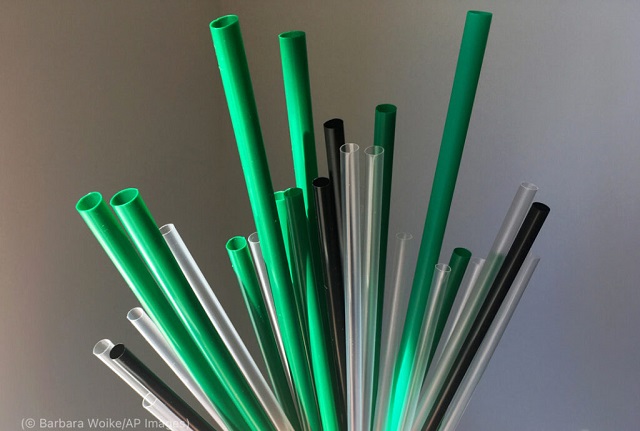 New York City moved to ban the use of plastic straws and stirrers in bars, restaurants and coffee shops in 2018. (© Barbara Woike/AP Images)

In January, the Plastics Pact released a list of problematic plastics — such as straws, cutlery and stirrers in addition to chemicals like PVC, PFAS and PETG — that are not reusable, recyclable or compostable. U.S. Plastics Pact members will develop guidance by 2025 on alternatives to these items.

“The results from the U.S. Plastics Pact’s efforts to advance packaging, improve recycling, and reduce plastic waste will benefit the entire system and all materials,” said Sarah Dearman, the vice president of Circular Ventures for The Recycling Partnership.

Banner image: Children play on a pile of discarded sheets of plastic left over from the manufacture of flip-flops in Nairobi, Kenya, in 2015. (© Ben Curtis/AP Images)