In recent decades, greater numbers of rural American women have established their own farms.

What’s more, it has been female farmers who increasingly practice sustainable techniques like soil testing and conservation, cover crops, permanent vegetation, composting and crop rotation. Today, spurred by the consequences of climate change, many large-scale commercial farms are following their lead.

Female farmers have emerged as leaders in the “slow food movement,” which encourages consumers to buy organic and local foods.

The movement took off during the 1990s, when small- and mid-size farmers found that selling directly to consumers can be a profitable way to compete against corporate farms. Consumers’ growing appetite for local produce — which they see as high quality — helped quadruple the number of farmers markets in U.S. towns and cities from 1994 to 2013.

The number of women farmers has risen rapidly. According to the U.S. Department of Agriculture’s 2017 Census of Agriculture (PDF, 1.4MB), 36% of U.S. food producers are women. That’s a 27% increase from 2012. Today, nearly half of U.S. farmland — some 157 million hectares — is farmed by women.

As women-owned, sustainable farms sell healthy food to their communities, they are building ties between their businesses and both rural and urban consumers. Many women farmers teach customers about nutrition and agriculture, donate meals to schools and unhoused people, volunteer in community programs or run for-profit bed-and-breakfast facilities or retail stores that stock other local businesses’ products.

“I’m able to provide a connection between people and their food,” says Visar Duane, who emigrated to the U.S. from Cambodia in 1981 and owns Purple Skies Farm in Ohio with her husband. “When we have guests at our bed-and-breakfast or farm market, they see where the produce comes from and how much effort and care goes into creating a quality product.” 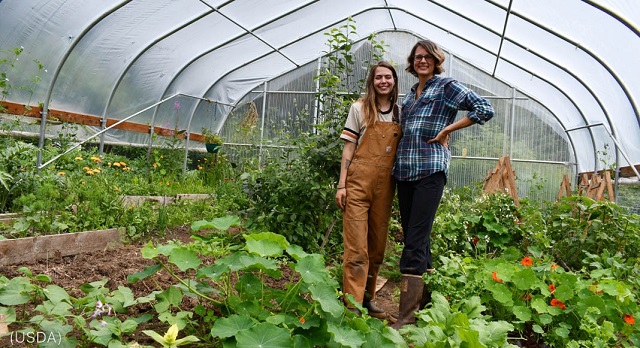 “It was scary here in Seldovia,” recalls Rosanna McInnes of Seldovia, Alaska. “There was a shortage of food coming in. My neighbor said I should sell my garden produce, so I did. I couldn’t sell it fast enough — that’s when I decided to expand my garden and help feed my community.”

Since President Ronald Reagan proclaimed a Women In Agriculture Week in the 1980s to today as the topic trends on social media, Americans honor female farmers like Duane and McInnes and pay tribute to the contributions they make to their communities.